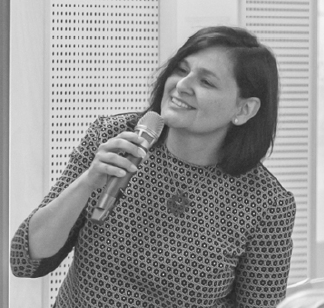 Dr. Federica Goffi is a professor of architecture and co-chair of the PhD and MAS programs (with Dr. Stephen Fai) at the Azrieli School of Architecture & Urbanism.

Goffi’s research concerns the renewal of buildings, whether they be heritage or not, questioning the relationship between architecture and time. Starting from the idea that a building is a sustainable work-in-progress and not the result of a single event of design, her work investigates built conservation as a form of invention and imagination. Her book, Time Matter[s]: Invention and Re-imagination in Built Conservation: The Unfinished Drawing and Building of St. Peter’s in the Vatican was published by Ashgate in 2013.

She is the Chair of the Carleton Research | Practice of Teaching | Collaborative (C R | P T | C), which she founded in 2019 with the PhD students. The collaborative pursues research in the humanities with a diverse research agenda that reflects the interests of the collaborators. She edited a book titled, InterVIEWS: Insight and Introspection in Doctoral Research in Architecture (Routledge 2019).

Goffi is interested in the relationship between psychosomatic health and architecture and has published articles originating from the observation of infraordinary events in the everyday life of healthcare facilities, to challenge the implementation of ordinary details, and respond to overlooked design issues fostering psychosomatic health in the built environment. She believes that it will be increasingly important for architects to design adaptable architectural details whose impact can be felt at the scale of cities.

She is the editor of the forthcoming Routledge Companion to Architectural Drawings and Models: From Translating to Archiving, Collecting and Displaying (2021) and guest editor of a forthcoming special issue of the Routledge journal Architecture and Culture, titled And Yet It Moves: Ethics, Power and Politics in the Stories of Collecting, Archiving and Displaying of Architectural Drawings and Models (2021).

She is the author of the forthcoming book chapter “FACTUM 1:1,” in T-Squared. Theories & Tactics in Architecture and Design, edited by Samantha Krukowski, with an introduction by David Leatherbarrow. Intellect Press (2021).

Architecture Research Quarterly, ARQ Cambridge, 2018, 22, 4: 325-338. “Fabrication Sites and Sites of Knowledge Construction: Translations and Dislocations of Architectural Media at the Fabric of St. Peter’s, the Vatican.”

“Chromesthesia and the Multiverse of Listening in Music and Architecture: Luigi Nono in Collaboration with Renzo Piano.” Forthcoming. The Sound of Architecture; Acoustic Atmospheres in Place. Edited by Angeliki Sioli and Elisavet Kiourtsoglou. Elsevier.

In her professional practice, Prof. Goffi has worked in the field of built conservation in Italy and the United States. She is a licensed architect in her native country, Italy.