Winners of the 2021 Murray & Murray Competition

The 2021 Murray & Murray Competition attracted 346 entries from students across the school who submitted drawings on the theme of Listening Spaces.

See the winners and jury comments below.

“I’d like to compliment the students on the tremendous effort in such a short time,” said retired Ottawa architect and juror Tim Murray, who endowed the award in 2003. “Obviously, there’s a wealth of talent en route at Carleton.”

The Murray & Murray Competition is a seven-day drawing competition that takes place in the first week of the fall term and celebrates the start of a new school year.

Interim Director Federica Goffi invited students to “realize a space for active participation, for which spatialized sound and embodied experience are essential.” For inspiration, she offered this quote by French philosopher Jean Luc Nancy from his 2002 book Listening:

“Communication is not transmission, but a sharing that becomes subject: sharing as subject of all subjects.”

“In spaces for listening, ideas are shared, debated, taken apart, or augmented,” Dr. Goffi wrote in the competition call. “The ability to listen reflects the greater ability to participate in humanity’s strife for social justice. The act of listening is indeed part of the ethical engagement with societal struggles.”

Out of 346 entries, studio faculty members chose 35 finalists for consideration by the following jury members:

-Alba Di Lieto, architect, head of the Carlo Scarpa Archive at Castelvecchio in Verona and an expert in hand drawing;

-Rana Abughannam, PhD candidate and instructor at the school.

The results were announced on September 15 at an awards ceremony on Zoom.

“There was such a variety in the responses to the call,” said Goffi.  “Thank you all for your thoughtful reflections, and for sharing your ideas and creativity through your submissions. Your truly insightful responses to the questions about our shared responsibility for the future left behind a sense of hopefulness.” 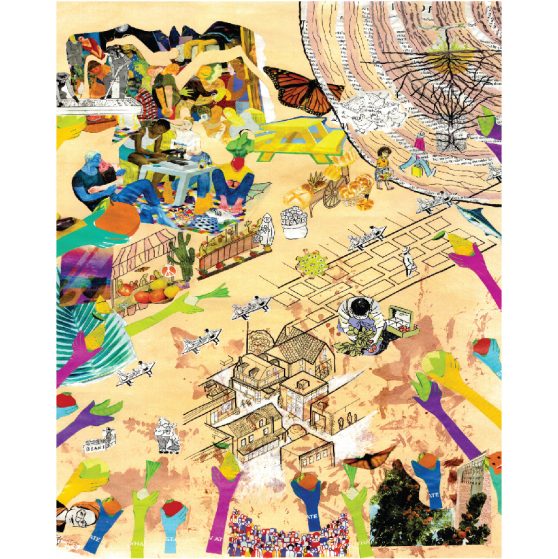 Jury Comments: “There is a rich use of multimedia, different perspectives, different scales, and vantage points. It captures different types of listening spaces, groups, and ideas of narrative. Where and how ideas are shared, debated, and uttered — this seems to encapsulate a lot of that. There is a careful layering of different media, alongside text and beautiful composition.”

“The brief called for these ideas of how we share space where things are discussed, debated, uttered,” said juror Assistant Professor Suzanne Harris-Brandts. “The brief is reflected beautifully in this piece.”

“It conveys a kind of spontaneous community exchange,” added juror Tim Murray. “It also doesn’t confine itself to the open gatherings. I see several illustrations of house and residence and various other forms that bring people together talking, seeing, speaking and listening to each other.”

“I was inspired by listening as a sense of community and gathering and how ideas are shared in that way.”

Jury Comments: “It’s fun. It’s very playful. It does graphically illustrate the listening and hearing process.  Full marks for reducing it to fundamentals.” Juror Alba Di Lieto added: “I love this drawing because first, it is witty. Second, it’s well executed. Third, I think there is a right interpretation of the theme of the competition.”

“In the last year, I’ve been living in two different apartments, and I would always hear so many different things throughout the building, so that’s what I immediately thought of. Just showing different people connecting through an apartment building and at the top left someone not wanting that.” 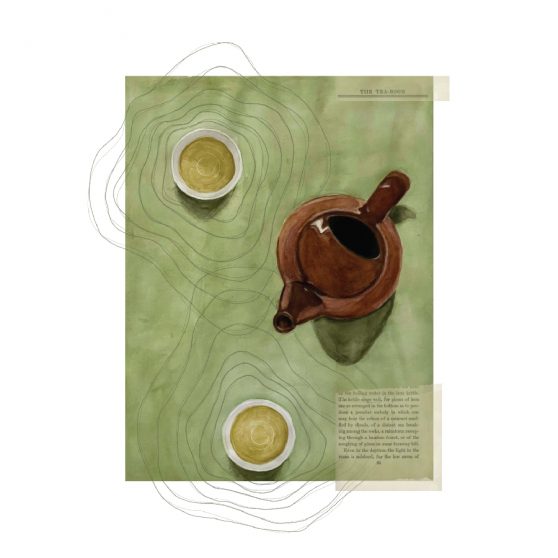 Jury Comments: “We enjoyed this piece for its simplicity, but as well the powerful visuals that the piece creates,” said juror Rana Abughannam. “While it’s subtle, it speaks loudly. We could understand that sense of a conversation and the ritual of the tea. Two people sitting together having a conversation — you could imagine the atmosphere. As well, the introduction of the text, with the image was quite a powerful medium to use.”

“It’s a very straightforward, simple statement about the notion of two people getting together and communicating,” added juror Tim Murray. “I’d like to compliment the author for reducing it down to the bare essentials. I love it.” 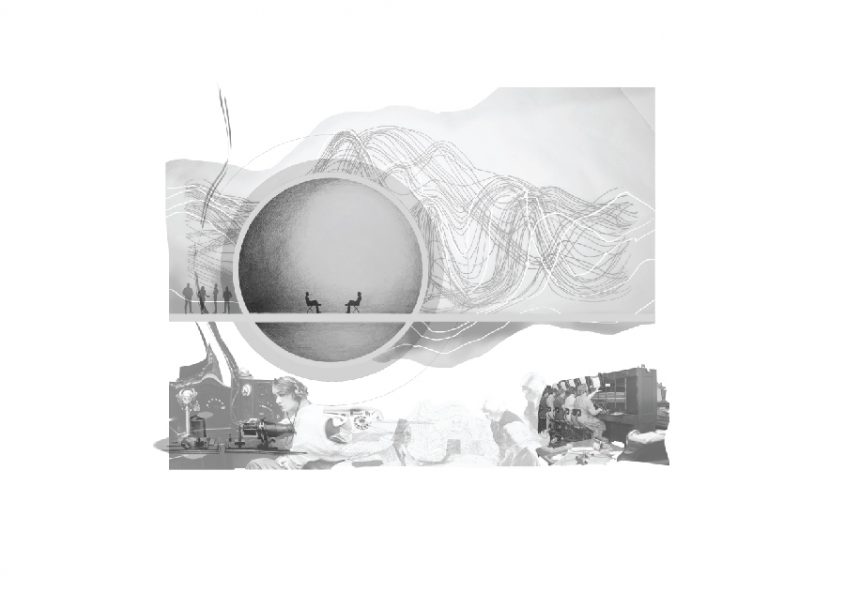 Jury Comments: “It’s very direct in terms of two people sitting across from each other, eventually branching out to a type of network. You have the notion of the handheld telephone. You’re looking at the switchboard. It’s very much about the analog and the auditory-visual effect. You can see a lot going on inside there.”

“I thought it was a well-put-together diagram in terms of the analog of communication,” said juror Assistant Professor Jake Chakasim. 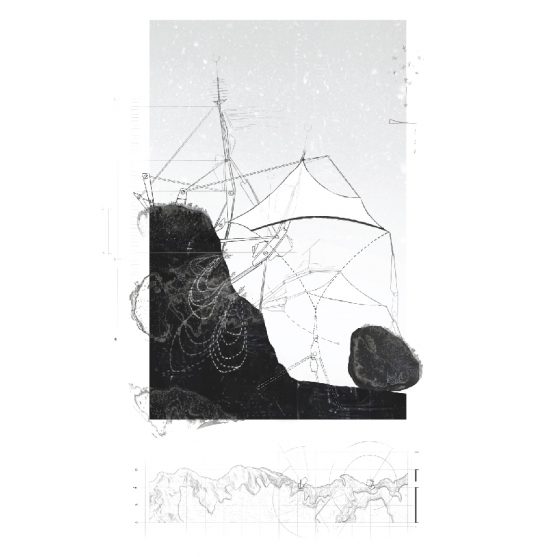 Title: Sounding at the Edge of a Slippery “We”: The Folly of a National Identiy Tied to the Shifting Lines of an Arctic Archipelago

“I was struck not only by the drawing’s composition but also its efforts toward design. I found it profound how the work interpreted listening as an audible act and a fully immersive endeavor, including us listening to our surrounding environment and its cycles of change. It’s about the eroding coastline and how we interact with it. This seemed timely amid today’s resounding calls to listen to the climate. It’s a captivating and well-executed work.”

“It does situate on the site of the eroding northern coastline, which is a climatic issue, but it’s also a social issue. The contraption is a bit of a folly trying to preserve an edge that can’t be preserved.” 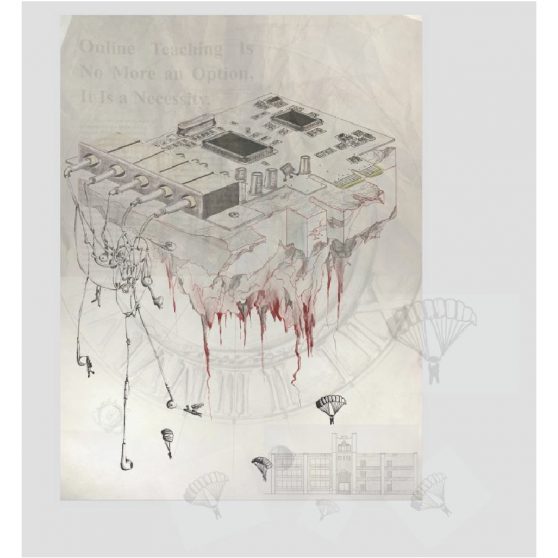 Jury Comments: “It’s playing on the idea of a new technology; that the classroom is now a chip on a computer board and it’s about us now learning from afar. That was a clever way to understand what a new classroom is about.”

Associate Professor Manuel Baez added: “This is a beautiful drawing and a beautifully executed plan and section from the earth revealing this new strange classroom that we’ve been experiencing. It captures the hyper-connected virtual world we are still experiencing.”

“I wanted to convey a message (about) how our traditional learning space has morphed into something quite bizarre and incomprehensible.” 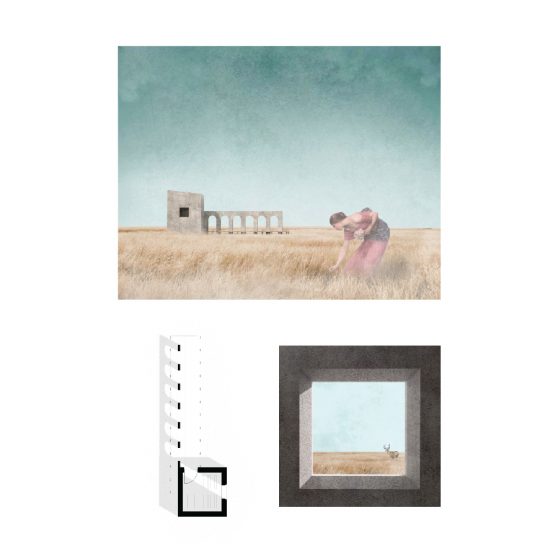 “The sounds of nature have long generated powerful reactions in human beings—from inspiring music and poetry (e.g., Beethoven’s Pastoral Symphony) to providing the stark symbolism that ignited the environmental movement (e.g., Rachel Carlson’s Silent Spring). Sounds confer a sense of place, connect people to nature, and increasing evidence suggests that natural sounds are important for human health and well-being”-Rachel T. Buxton, A synthesis of health benefits of natural sounds and their distribution in national parks.

Jury Comments: “I loved this drawing because there is a lyrical interpretation of the theme of the competition and it connects the atmosphere of landscape with architecture and at the same time realizes the idea of sound,” said juror Alba Di Lieto. “I also like the layout of the sheet in three different squares. Also, the connection with the title, the sounds of nature, is, in this moment, particularly important.” 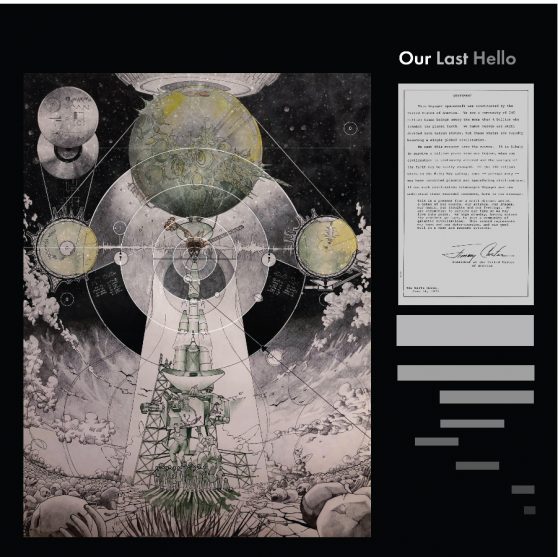 Jury Comments: The jury praised the “existential quality” of the drawing. “This was a very interesting composition in terms of reminding us of how far we have come as humanity in terms of our relationship to the cosmos and where we’re going into the future,” said juror Assistant Professor Jake Chakasim.

“I wanted to create something that was more unifying and larger than life. I wanted to design this space where you could listen to this golden record, which sits on the Voyager 1.” 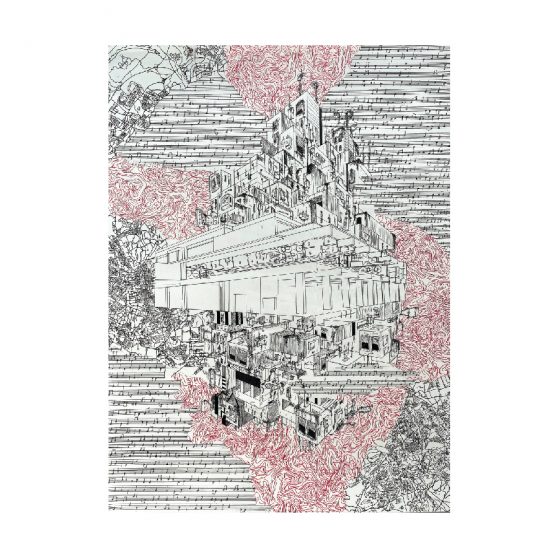 Title: The Life and Death of an Untold Speech, Carleton Architecture Building – 2226

Jury Comments: “It’s interesting that it incorporates communication in the form of music. It is also engaged in an interesting graphic in the building and the activities that relate to it and people communicating in various ways. It’s incisive, and it’s thoughtful and beautifully executed.”

“I’ve always been interested in futuristic stuff. If we don’t talk about the right meanings and the right speeches, it might lead toward a dystopian future.”

“I’d like to thank former Director Jill Stoner for her hard work on raising the profile of the Murray & Murray Competition and for providing a gallery for the winners. Also, for introducing the architectural faculty to become participants.

“I’d also like to congratulate Dr. Federica Goffi on her appointment as interim director of the school. I know she’ll do a great job and raise it to new heights. Her emphasis on freehand drawing is much appreciated by the Murray & Murray sponsors. In addition, her introduction of Alba Di Lieto to this year’s judges panel is much appreciated and a great help.”

The Interim Director, Federica Goffi, would like to recognize Architect Tim Murray for the wonderful opportunity that the Murray & Murray Prize provides every year by bringing together the entire school and all its curricula into a single competition.

The success of the call relied on the support of faculty and instructors who advised students during the one-week competition. The collegial insights of the first phase judges and final jurors were tremendous and lead to a fine selection of finalists and winners. Goffi acknowledges Communications Coordinator Gabrielle Argent and Teaching Assistant Shane Villeneuve who supported the digital platform that allowed to run the four-hours jury process seamlessly.

Last but not least, we are grateful for the participation of Architect Alba Di Lieto, an expert of hand drawing and Executive Architect of the city museums in Verona, Italy, where she is also the Curator of the Carlo Scarpa Archive at the Castelvecchio Museum. She concluded the jury process with a brief presentation about the Brion Vega Cemetery contemplative pavillion, designed by Carlo Scarpa, showing images and drawings from the archive, and defining this space as a paradigmatic place for meditative listening.