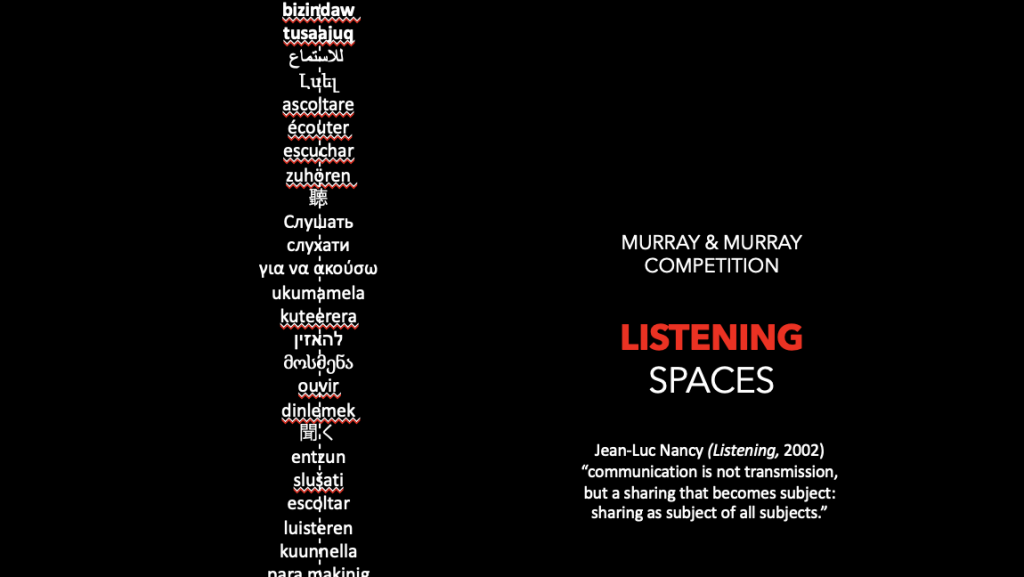 Communication is not transmission, but a sharing that becomes subject: sharing as subject of all subjects.

The Murray & Murray Competition is a one-week hand drawing competition with cash prizes. It has been a long-standing tradition at the school and serves as a warm-up exercise at the start of the school year.

Here is Azrieli School Interim Director Federica Goffi’s introduction to the project delivered to more than 420 students at the All School Welcome on September 8, 2021.

This year the Murray & Murray Competition calls for the design of Places for Listening.

Listening is a cultural and spatial condition that reflects how we connect and communicate.

We are all just as we speak in different locations where stories took place. Stories collect, stories accumulate, stories fall into place.

What does it mean to design a place for listening?

The architecture of listening refers to how listening is construed and constructed.

Listening can be about collectivity and collaboration. It invites us to stretch the ear into that which is not yet encoded, revealing the unspeakable and the inaudible.

Its significance is perhaps revealed in the etymology of the word itself in different languages.

The spatial and cultural condition of listening has been challenged on the one hand by the COVID-19 pandemic and on the other by inequities, questions of social and spatial justice emerging on the global stage.

As we are coming out of a long period of social isolation while navigating a crisis of listening in an age of post-truth, this competition asks where and how ideas are shared, discussed, debated, uttered, heard, emphasized. Starting from this premise, we ask: What makes for a good space for listening? And what is the role of architecture in defining it? Where and how do we share responsibilities for the world in which we partake?

This call is based on participatory creative imagination, overlapping one thought with another, one conversation with a sketch, and spatial with aural experiences in shared listening spaces. 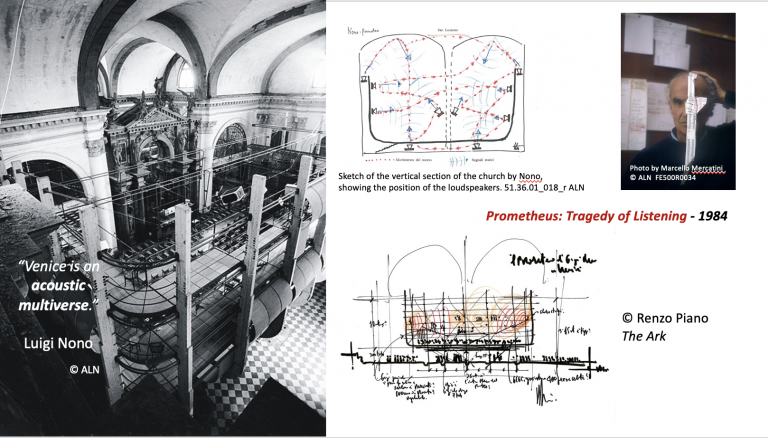 Allow me to tell you a short story about a collaboration between composer Luigi Nono, architect Renzo Piano, and philosopher Massimo Cacciari that resulted in Prometheus: Tragedy of Listening, performed in 1984, in Venice, Italy.

In Nono’s own words, Venice was the acoustic multiverse in which he operated. Water is a key element of this multiverse. Sounds reaching from different directions are the signs of life, inviting work, and participation.

The Venetian laguna soundscape of industrial production is reflected in Prometheus.

The ability to listen to spaces reflects the greater ability to participate in humanity’s strife for social justice, emblematically represented in the figure of Prometheus. Listening is part of the ethical engagement with societal struggles.

Nono covers his left eye with a music sheet referencing the mobility of a sound that is heard but cannot be seen. The composer intended to break the fixity of stage and audience relations in traditional Western theatres based on the dominance of vision, to turn it into what the human condition of listening affords when sounds originating in a plurality of sources reflect in multidirectional ways: far/near, above/below, spatialized through interaction. Every listener is at the centre of a unique experience, where space is architectural, musical, and social all at the same time. The mythological condition of Prometheus evoked by Nono is a call for the awakening of human consciousness.

Nono did not aim at creating a unified whole, but rather a diversified multiplicity, attained through real-time responses of performers listening to one another, to space, and everything around them. Their visualizations of sound paths in musical scores and architectural sketches in plans and sections were based on sensory associations of one sense modality with another through the use of coloured notations allowing for chromesthesia—a silent “colour hearing” through “sound seeing.” Scores and sketches do not represent a static reality but rather anticipate time and sound, however ephemerally. As allographic arts, music and architecture are developed through an interposed representational medium used to invite participation between interdisciplinary collaborators.

Nono believed that it was necessary to “learn to live with the plurality of times and spaces, with multiplicities and with differences.”

In spaces for listening, ideas are shared, debated, taken apart, or augmented.

The Ark was designed by Piano to stand freely in the space of the church of San Lorenzo in Venice. This was an acoustic choice since the gap between the Ark and the interior church walls defined a double volume for sound reflections; it became possible to hear two spaces: one internal (the wooden Ark) and the other external (the walled stone church). The Ark was composed of three levels of footbridges that allowed live sound and live electronics to be played at different levels in the space. Piano’s Ark is a musical instrument and not just a stage.

The second performance of Prometheus took place in a disused industrial factory in Milan (1985) rather than a performance venue.

You are invited to realize a space for active participation, where spatialized sound and embodied experience are essential. Indeed, architects are called to listen not just to space, collaborators, and their craft in a collective effort but also to socio-political events. Listening invites to create empathic connections. It is a radical practice that requires a readiness to make changes. 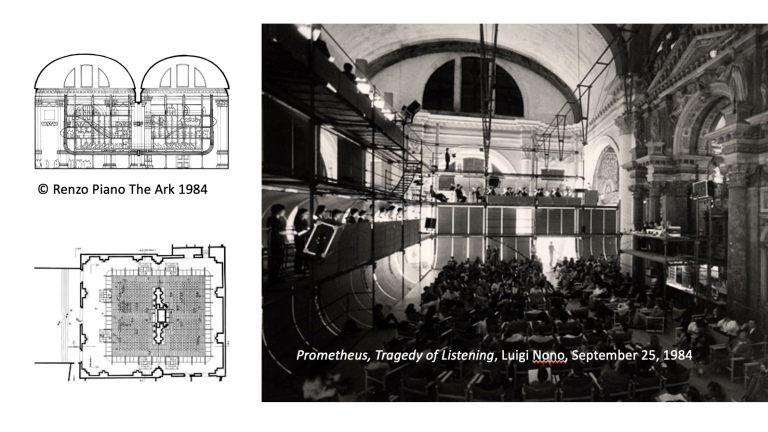 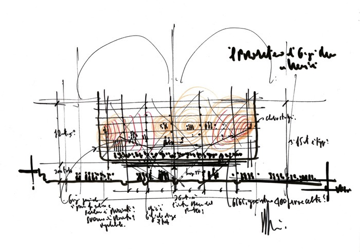 Preparatory sketch for the Ark by Renzo Piano (1984). © Courtesy of Fondazione Renzo Piano.

The judging, announcement of winners, critics’ comments, and exhibition will take place online on September 15, 2021. All studio faculty will take part in the first phase of judging. The judges for the second phase are:

-Alba di Lieto, architect and head of the Carlo Scarpa Archive at Castelvecchio in Verona and an expert in hand drawing;

-Rana Abughannam, PhD candidate and instructor at the school.

The prizes are as follows:

The Murray and Murray Prize has been awarded at the Azrieli School of Architecture & Urbanism since 2003. According to the original terms of the prize:

“The competition challenges students to develop and present an architectural idea through hand-drawn drawing and to demonstrate an exceptional ability in using scaled and rendered drawings that include the conventions of plan, section, and elevation.”