PhD Candidates and PhD students at the Azrieli School of Architecture & Urbanism will present work covering a wide range of research areas and disseminated through national and international conferences and publications.

The Open Colloquia is a series of biennial events that offer insights into ongoing research conducted in the school’s PhD program.

Jenan Ghazal — Walls and Other Forms of Walling: The Production of Spatial Violence in Beirut 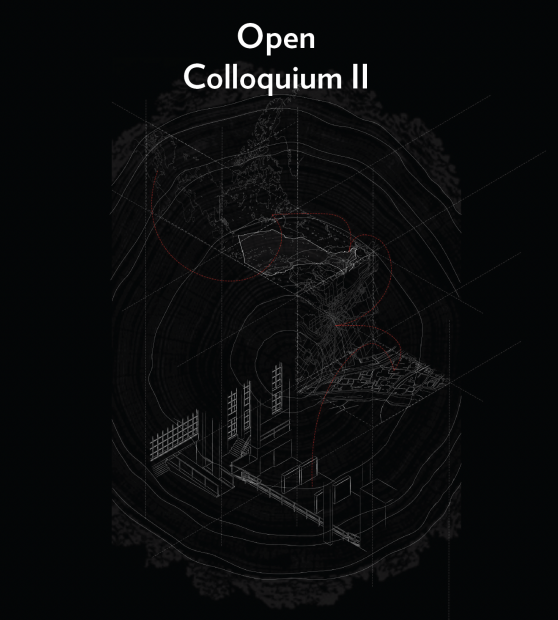 Isabel Potworowski — Mediators of Transcendence: Examining the capacity of architecture to mediate an experience of transcendence in three buildings by Peter Zumthor

Katie Graham — The Focalization of Heritage through Digital Modelling and Representation

Ahmed Elsherif — Architectures of Liberation: Epistemic Disobedience and other Ontologies of the Nile Valley

Warren Borg — Transformative Architecture during Sangussaqtauliqtilluta from 1941 to 1965: The Beginnings of Iqaluit (Formerly Frobisher Bay) 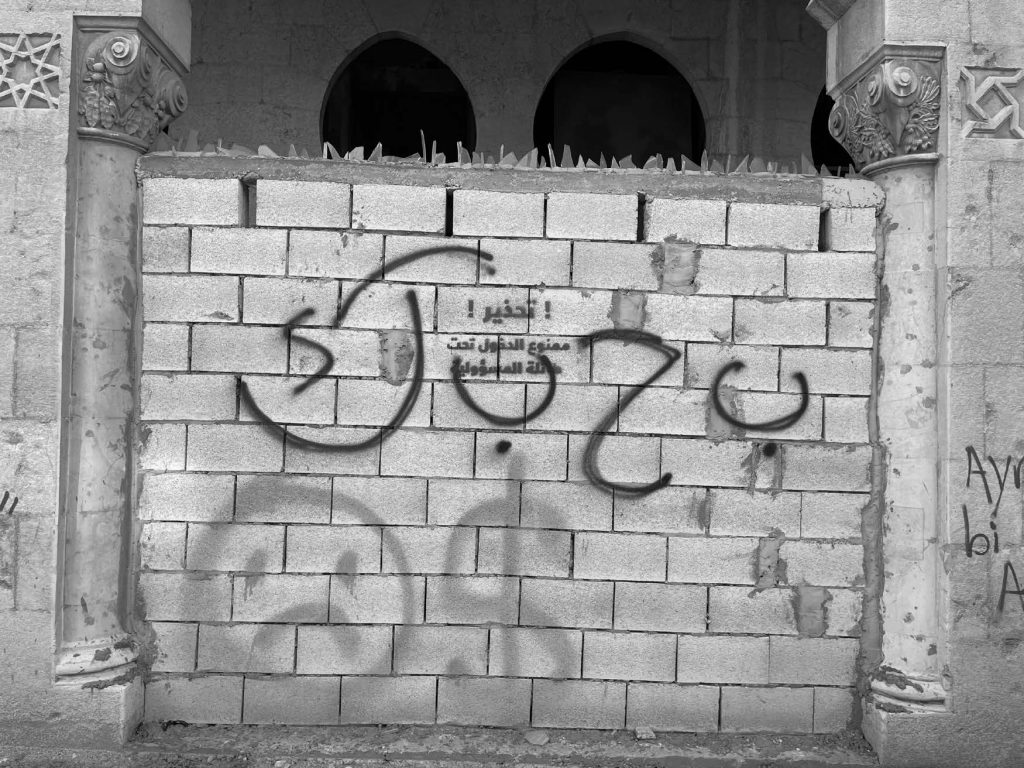 Jenan Ghazal — Walls and Other Forms of Walling: The Production of Spatial Violence in Beirut

The façade of one the entrance to the abandoned Grand Theater in the political center in Beirut. Source: Ghazal, January 7, 2022. 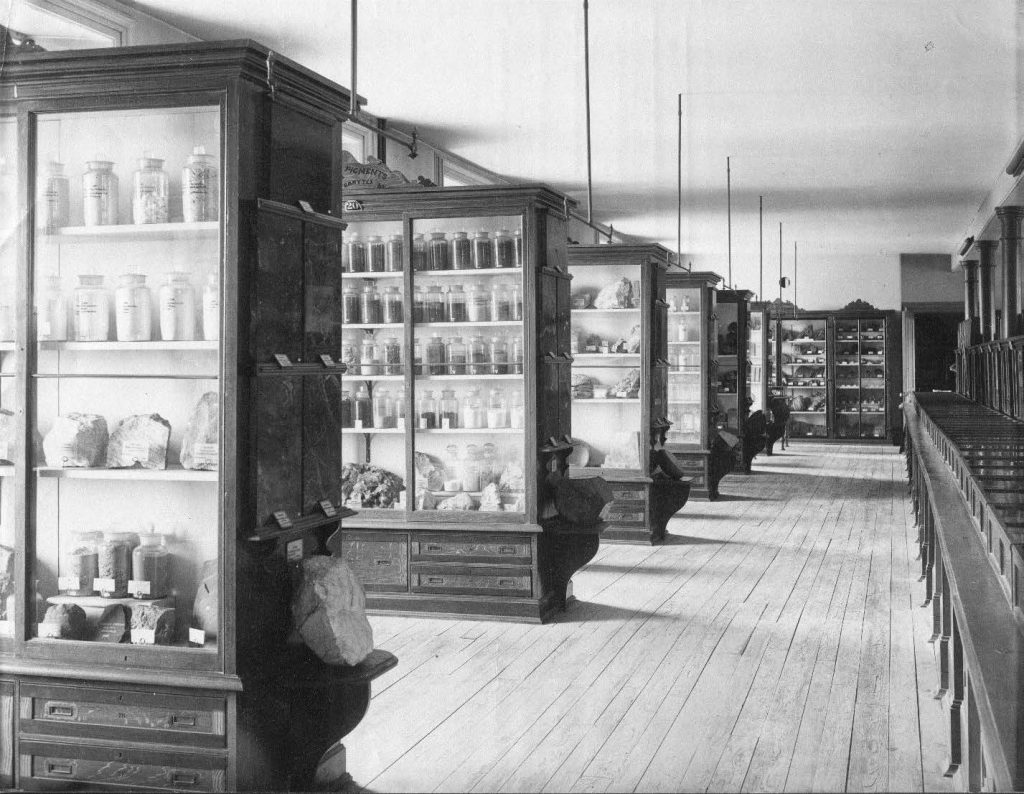 Interior view of the mineral display in the National Museum on 541 Sussex, Ottawa, dated 1881.
Source

JENAN GHAZAL is a PhD candidate at the Azrieli School of Architecture & Urbanism, involved in historical and contemporary entanglements of architecture, political violence, and the body in urban spaces. She has a BA (2012) and MA (2014) from the Académie des Beaux-Arts in Lebanon, where she also has professional experience as a licensed architect. Before obtaining a Master of Architectural Studies from Carleton University (2016), Jenan was actively involved with community-based activism and documentation of endangered heritage buildings in her hometown Tripoli, Lebanon. Living in a city in conflict, she has experienced first-hand the destruction inflicted both on and by the built environment while she was in her undergraduate studies in architecture.

Inspired by this journey, her doctoral research aims to destabilize traditional assumptions about the dynamics between political violence and architecture in Lebanon. Considering spatial violence as a political (and architectural) practice of oppressing states, she looks at Beirut’s specific urban spaces where citizens experienced physical and non-physical violence brought by their immediate built environment. Her work aims to contribute to an understanding of spatial violence in architecture –not as a state of exception but as continuous immanence. She is currently a SSHRC scholar (2020) and is affiliated with the Department of Near and Middle Eastern Civilizations at the University of Toronto.

ÉMÉLIE DESROCHERS-TURGEON is a designer and researcher whose work explores the intersections of architectural representation, spatial justice, and landscape through the mediums of drawing, publication, exhibition, and education. Her research interests broadly include the relationship between built environments and ecologies, with a particular emphasis on settler colonial building practices. She holds a professional master’s degree in architecture from McGill University and a bachelor’s degree in environmental design from Université du Québec à Montréal. She practiced design in Montreal and Berlin, where she gained experience in low-income housing and exhibition design. Her doctoral research, funded by the Vanier Canada Graduate Scholarship, considers the scale, the material assemblages, and the political aesthetic of the Central Experimental Farm and Museum of Nature in Ottawa as infrastructures of settler colonization.

RANA ABUGHANNAM began her PhD studies at Carleton University’s school of architecture and urbanism in 2017. Her research interests revolve around architecture and urbanity and the socio-political conditions which govern them. She is a contract instructor at Carleton University, teaching undergraduate studios and history and theory seminars. She has also co-taught graduate studios revolving around architectural design, urbanism, and spatial formations within colonial and post-colonial settings. Before joining Carleton University, Rana taught at the Canadian University Dubai and the Department of Architecture at Birzeit University. Rana obtained her professional degree in architectural engineering from Birzeit University in Palestine in 2012. In 2013, she received her post-professional master’s degree in the history and theory of architecture from McGill University. Rana is a registered architect in Palestine. Her PhD dissertation, supported by a SSHRC Doctoral Fellowship, builds on her previous research and focuses on built heritage rehabilitation in Hebron, Palestine, as a form of countering colonialism.

KATIE GRAHAM is part of the faculty of the Bachelor of Media Production and Design (BMPD) in the School of Journalism & Communications at Carleton University. Through her work as an instructor, she teaches topics related to visual communications, digital media, and storytelling. For the 2020/21 academic year, Katie won the “Excellence in Blended and Online Teaching Award” for creating engaging online courses that acted as an example of how digital technology communicates successfully. Katie is associate faculty at Carleton Immersive Media Studio (CIMS), a research lab focusing on how advanced digital technologies and hybrid forms of representation can reveal the invisible aspects of architecture. Before her appointment with BMPD, she led multiple digitally assisted storytelling projects at CIMS that use digital assets to create public outreach projects for the web, mobile, and virtual reality. Projects include the Parliament: A Virtual Experience, which won a prix gémeaux in 2020. She has recently been appointed the Digital initiatives Advisor for the Canadian Centre for Mindful Habitats – a non-profit organization that engages in thoughtful conversations regarding mindfulness in areas including storytelling and digital technology. Katie is currently completing her PhD in Architecture at Carleton University with a focus on virtual reality storytelling.

KRISTIN WASHCO is a PhD Candidate at the ASAU, Carleton University. She received her master’s in architectural history and theory from McGill University and her professional degree in architecture from Virginia Polytechnic Institute. Kristin is a registered architect and has practiced professionally across the United States and Canada. Her research interests are centered around the synesthetic experience of architecture, methods of architectural representation, and the translation from page to built work. In 2021, she co-founded the design firm Métier Projects and currently lives and practices in New York. She is also a coordinator of CR|PT|C (Carleton Research Practice of Teaching Collaborative).

SERKAN TAYCAN is a PhD student at the Azrieli School of Architecture & Urbanism. He holds a BA (2003) in civil engineering and completed his MA (2014) in visual arts at Sabancı University, Istanbul, and in photography at Aalto University, Helsinki. Serkan is a visual artist whose work has been exhibited in various museums and galleries, including the Venice Architectural Biennial, MAXXI, MuCEM, and the Istanbul Museum of Modern Art. Between 2015-2018, he taught courses on visual arts in the public realm and architectural photography. In his PhD research, he focuses on how infrastructural interventions alter water bodies and their transformative effects on border ecologies.

AHMED ELSHERIF is a PhD student at the Azrieli School of Architecture & Urbanism. He holds a BFA (2012) from Alexandria University, Egypt, where he worked in academia at various universities. He received the Erasmus+ grant (2016) for staff training mobility program, England, UK, and was awarded the Fulbright scholarship to pursue his MDesSE (2018) at Iowa State University. Prior to joining Carleton University, Ahmed worked as a teaching assistant in the United States, where he received his MFA/MS Arch (2021) at Iowa State University. His research interests span the nexus of architecture history, critical theory, and culture.

WARREN BORG, OAA, NWTAA, MRAIC, has been a PhD student at Carleton University’s ASAU since 2020. He is also an architect and the founder of borg architect. Warren specializes in Arctic design and construction methodologies with substantial commercial, residential, and institutional experience in the government and private sectors. One of his guiding principles is that “pride of place is sustainable,” and holism is essential to creating viable environments. Warren has served as a guest speaker at various institutions, including Carleton University, Laurentian University and the University of Technology, Jamaica. Warren’s research interests revolve around remote transformative architecture and its role during rapid societal shifts within Indigenous communities. His doctoral work deals specifically with Iqaluit, Nunavut’s transformative architecture during Sangussaqtauliqtilluta (period of disruption) from the community’s inception in 1941 to 1965. 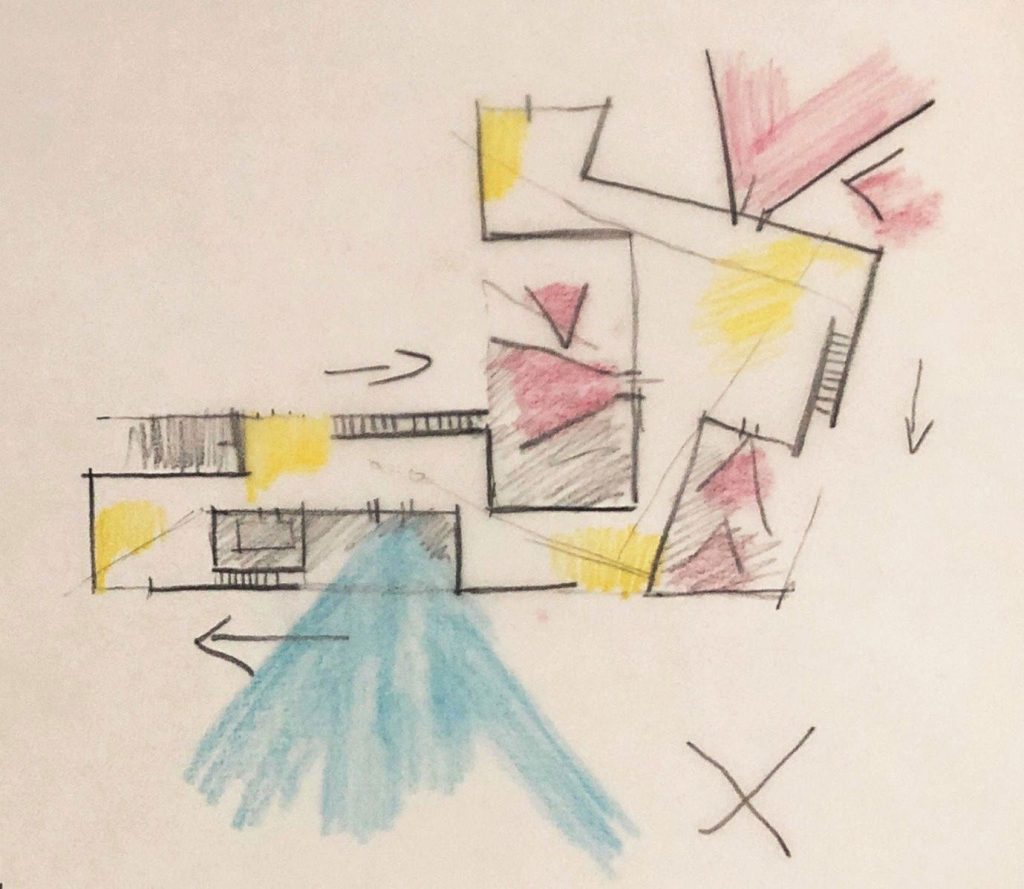 Isabel Potworowski — Mediators of Transcendence: Examining the capacity of architecture to mediate an experience of transcendence in three buildings by Peter Zumthor

Floorplan sketch of the Kolumba museum. Traced by Potworowski from an original drawing by Peter Zumthor. 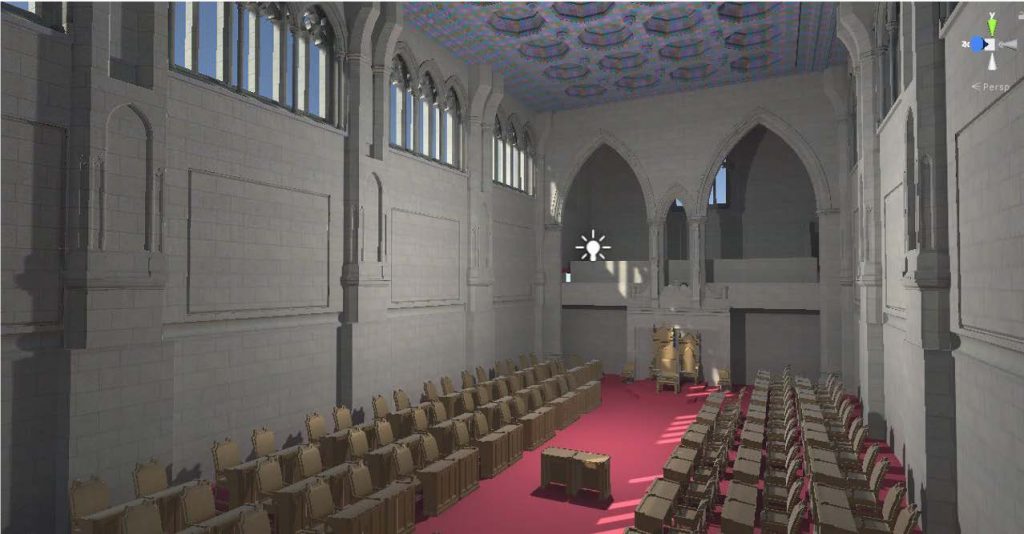 Katie Graham — The Focalization of Heritage through Digital Modelling and Representation 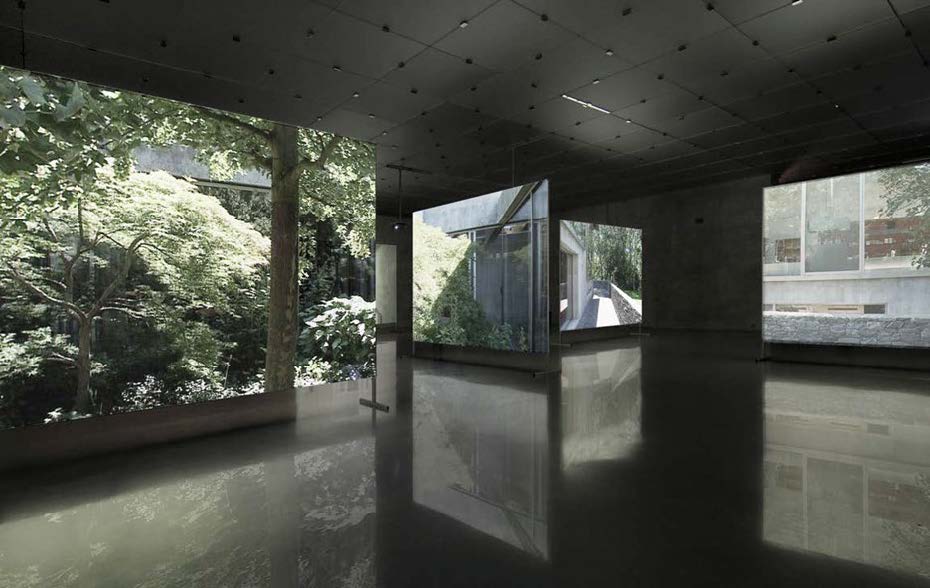 About the Critical Respondents

Dr. Eunice Seng is an associate professor and chair of the PhD Program in the Department of Architecture at the University of Hong Kong and founding principal of SKEW Collaborative. Her work explores interdisciplinary intersections, transnational connections and agency in architecture, housing, domesticity, gender, labor, and public space. Recent publications include Resistant City: Histories, Maps, and the Architecture of Development (WSP, 2020), “Whose Habitat? Housing and the Dilemma of Architectural Production,” TDSR (2021), and “Working Women and Architectural Work,” Aggregate (forthcoming). She is co-editor of “Dwelling in Asia,” Journal of Architecture (2017), and “Cosmopolitanism’s Others: Forgotten Histories of Transnational Architectural Practice,” Architectural Theory Review (2022); and editor of “Competency,” Ardeth 10 (2022).

Dr. Sophia Psarra is a professor and director of the Architectural and Urban History and Theory PhD Programme at the Bartlett School of Architecture, UCL. Her research centres on how architectural and urban spaces are shaped through design. She is a specialist in the intersection of spatial configuration with power relations and the spatial and political culture of buildings and cities. She published three books on this subject. She researches the architecture of parliaments in relation to the formation of political culture in European and wider contexts. This work led to two conferences on Parliament Buildings at the Bartlett, UCL (November 2020; February 2021) and a forthcoming co-edited volume. She was part of a team that won first prizes in international architectural competitions (EUROPAN). Her work was exhibited at the Venice Biennale, the George Pompidou Centre, NAI Rotterdam, London, Berlin, Milan, and Athens.

Dr. David Theodore‘s scholarship explores the history and theory of computers in the organization, construction, and management of institutions such as hospitals and prisons. He co-published on the history of medicine and architecture in the Canadian Bulletin of Medical History, Social Science & Medicine, Technology and Culture, and Scientia Canadensis. His research has received support from FRQSC, CFI, SSHRC, CIHR, the Graham Foundation, and the Pierre Elliott Trudeau Foundation. He is an active design journalist and critic, serving as regional correspondent for Canadian Architect and a contributing editor at Azure.

Dr. Lisa Moffitt‘s design, research, and teaching are prompted by a deep compulsion to make things – paintings, photographs, buildings, installations, speculative design projects, physical models, and environmental instruments – that question how architecture materially alters, impacts, and constructs new environments in light of climate change. Lisa founded her design practice, Studio Moffitt, in 2008 after working as senior designer at PLANT Architect in Toronto. She was most recently a tenured academic at the University of Edinburgh, where she also completed a PhD in architecture by design exploring the use of physical environmental models as architectural design tools. She has published widely on this topic, including in Landscape Research, Technology | Architecture + Design, Architectural Research Quarterly, and Architecture and Culture. She is currently completing a book titled Architecture’s Model Environments as part of UCL Press’s Design Research in Architecture series. Lisa was Washington University’s Fitzgibbon Scholar, RISD’s AIA Henry Adams Gold Medal Recipient, and received the University of Edinburgh’s David Willis prize for doctoral research. 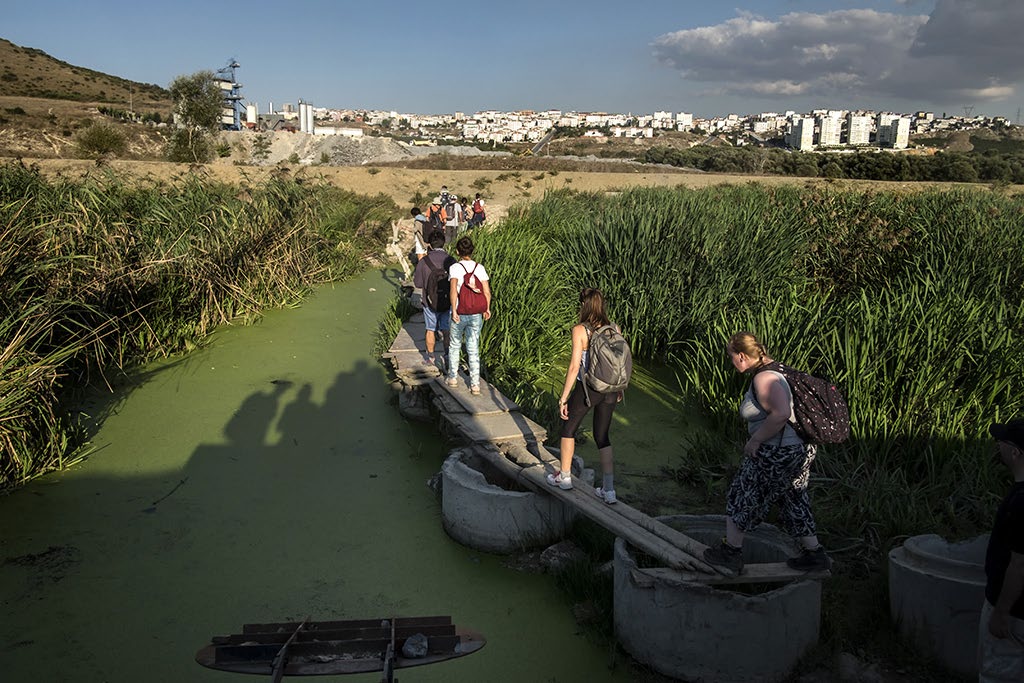 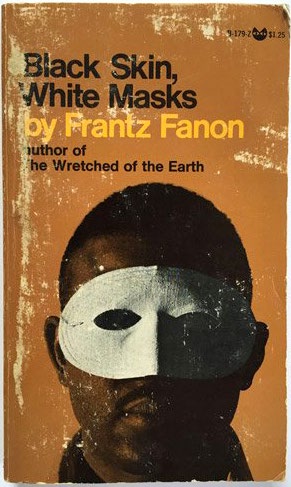 Ahmed Elsherif — Architectures of Liberation: Epistemic Disobedience and other Ontologies of the Nile Valley

The journey “from one way of life to another, but not from one life to another”. Cover page, from Fanon, Frantz. Black Skin, White Masks [1952]. Translated by Charles Lam Markmann. New York: Grove Press, 1977. 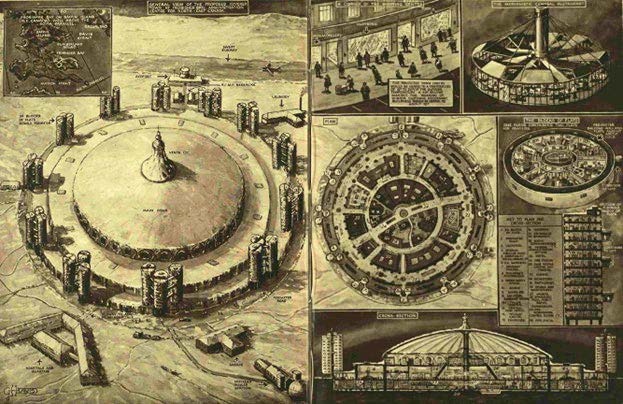 Warren Borg — Transformative Architecture during Sangussaqtauliqtilluta from 1941 to 1965: The Beginnings of Iqaluit (Formerly Frobisher Bay)