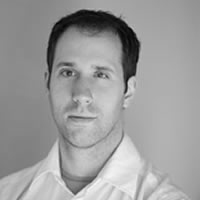 Johan Voordouw is a registered architect in the UK. Prior to his appointment at Carleton University, he taught at De Montfort University and London Southbank University. He has worked in professional practice in the UK, most notably at Foster + Partners, and in practices in Canada and the Netherlands.

Johan’s research interests are broadly described as digital design practice but focus on new modes of architectural representation and fabrication, situating his visual research to established theoretical discourse on representation, and material practice. Recent interests are on the conceptual condition of the cloud as a natural phenomenon and technological system.

At its core is an aim to develop new means of visualizing architectural information and ideas.

His work methods are two-fold; the primary mode of inquiry uses large catalogues of architectural information to reveal latent architectural histories and narratives. These narratives are simultaneously reinforced through a novel exploration of technique. These explorations question the very purpose of representation such as the expanding definition of the line – as expressed in his Weerkas project and published in the article Digital Line: Architecture’s Expanding Thread – or considered in the New Image of Home where the role of the point, dot and pixel is explored and theorized as a novel method of image making.

Johan’s work has been extensively published and exhibited in Canada, the United States, England, Austria, and the Netherlands. Venues include the Magazin Gallery and Academy of Fine Art in Vienna, International Architecture Biennale in Rotterdam, Royal Academy Summer Show London, and the Venice Architecture Biennale. In 2019 he completed the architecture residency at Art Omi; in 2020 he held two exhibitions in Ottawa at the Shenkman Arts Centre and the Lightroom Gallery.

Johan is establishing a  research-based design practice with his colleague Ozayr Saloojee. This practice will continue the line of design thinking established through the Fluid Boundaries project, and aims to develop socially, and environmentally considered projects and installations.