Part One: Jonathan Caron — “Show you really want to do it”

Many architecture students dream of working at famous international architecture offices. This four-part series tells the stories of three students from the Azrieli School of Architecture & Urbanism who landed at high-profile firms and the insights and opportunities they gained from their experiences.

Jonathan Caron’s favourite architecture firm “forever” is Herzog & de Meuron, of Switzerland. “There’s this incredible thoroughness in everything they do,” he says. “At Carleton, when I wanted inspiration, I would look at their projects.”

Caron told himself that one day — after becoming a licensed architect and honing his skills at a top Canadian firm, perhaps Saucier + Perrotte — he would dare to apply to Herzog & de Meuron.

Winner of the 2001 Pritzker Prize, Herzog & de Meuron has designed projects across the globe, including stadiums, hospitals, offices, laboratories, and apartment buildings. Among their highly recognized public facilities are the Tate Modern in London, the National Stadium (nicknamed the “Bird’s Nest”) in Beijing, and the Elbphilharmonie in Hamburg. The firm has nearly 500 employees.

“This whole world is attainable.”

In 2018, Caron received some astonishing news. It was during his third year of the Bachelor of Architectural Studies program, and he was on a six-month exchange at the Technical University of Berlin in Germany.

Two of his classmates at the Azrieli School of Architecture & Urbanism, James Caruso and Zak Hamza, had landed jobs at the Bjarke Ingels Group, an internationally renowned Danish firm known as BIG. 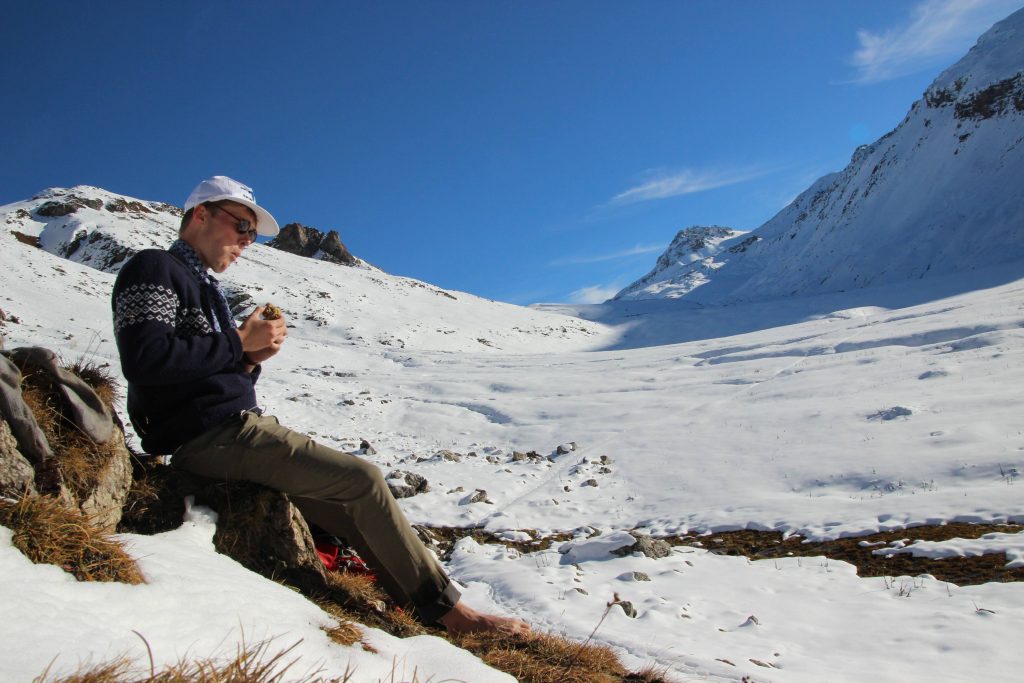 Caron knew that Caruso and Hamza were talented. In fact, they were part of a group of friends with whom he engaged in friendly competition. “It was fantastic to be around them,” he recalls. “They pushed me to work harder and harder. I almost did my projects for them.”

Still, this development was a game-changer. “I imagined that people going to these offices are absolute legends,” marveled Caron. “It suddenly gave me hope that I can try something like that. It means this whole world is attainable.”

Caron got busy. He knew that Herzog & de Meuron had an office in Berlin. He researched the name of the office director and went to a print shop to make a hard copy of his portfolio. Then, he went to their office, knocked on the door, and asked for the director, who told him: “I literally have no time, but you can give me your portfolio.”

Two weeks came and went. Finally, discouraged, Caron called to ask: “Can I at least come and pick up my portfolio?” It was a Tuesday. 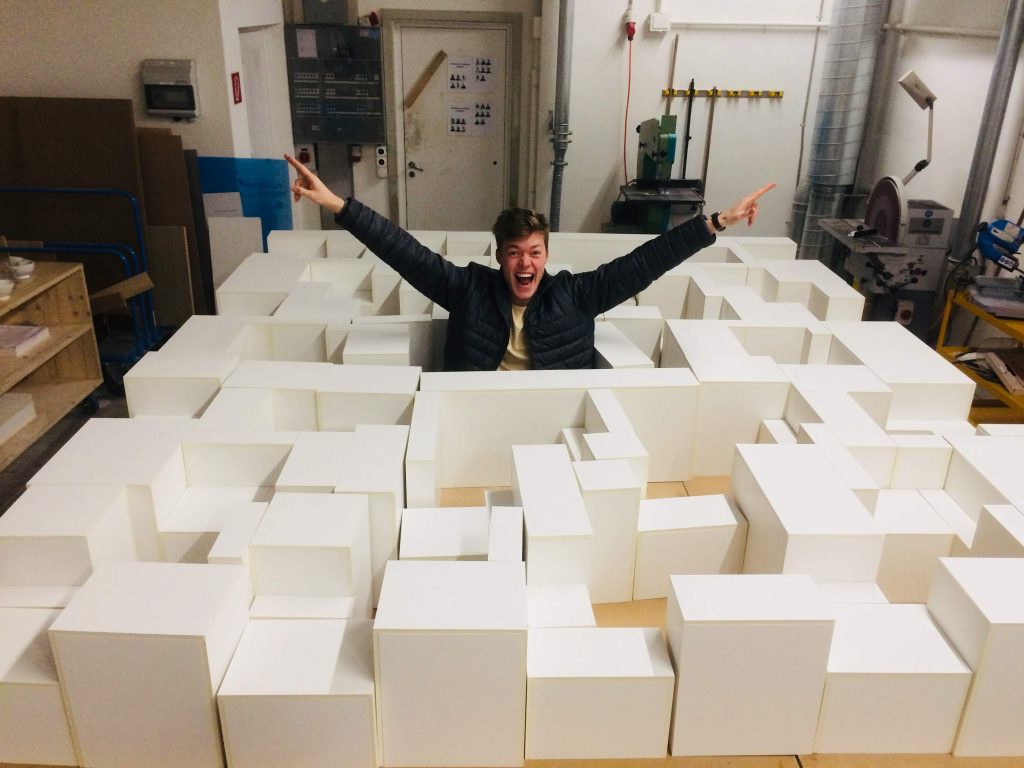 Jonathan Caron with the façade mockup of the Museum of the 20th Century.

“Are you available on Friday?” the director asked.

Caron presented himself at the office on Friday for an interview. “I tried to communicate as much as possible my extreme eagerness to work there.”

The next day, he received an email offering a job at the Berlin office but noting that he would be a better fit for the Basel, Switzerland office. “I was ecstatically happy,” says Caron. “I was supposed to achieve that a few years down the line.”

A trainee at Herzog & de Meuron

In September 2018, he reported for work as a trainee in Basel, joining a team whose members hailed from all continents.

“I was so taken aback at the quality of the people,” he says. “It was the highest concentration of incredibly talented people that I had ever seen. It was overwhelming how interesting, cultivated, sporty, political they were. We’d go on hikes. Have philosophical discussions.”

Caron started on the Museum of the 20th Century in Berlin as part of a 22-person team. “I loved that project.” He worked with six other people for eight months on the façade. “I was doing a lot of renders, elevations, sections, plans, and material mockups.”

The founding partners, Jacques Herzog and Pierre de Meuron, “would come and look at them, and we’d have discussions.”

He knew he was in a remarkable situation. “What other office in the world has seven people working on a façade for eight months?”

As the museum wrapped up in the spring, Caron wondered about his next assignment. He hoped to gain experience with a smaller, early-stage project. Though he was at the “very bottom of the pyramid,” he decided to email a senior partner. “I told him how grateful I was to be part of the museum team and told him what I would love to do.”

Unexpectedly, his wish was granted. “I was like, ‘Wow.’ I was put on exactly the project I wanted. I was there on the first day of a small housing project in Switzerland. It was very small scale with only two people on it full-time.” 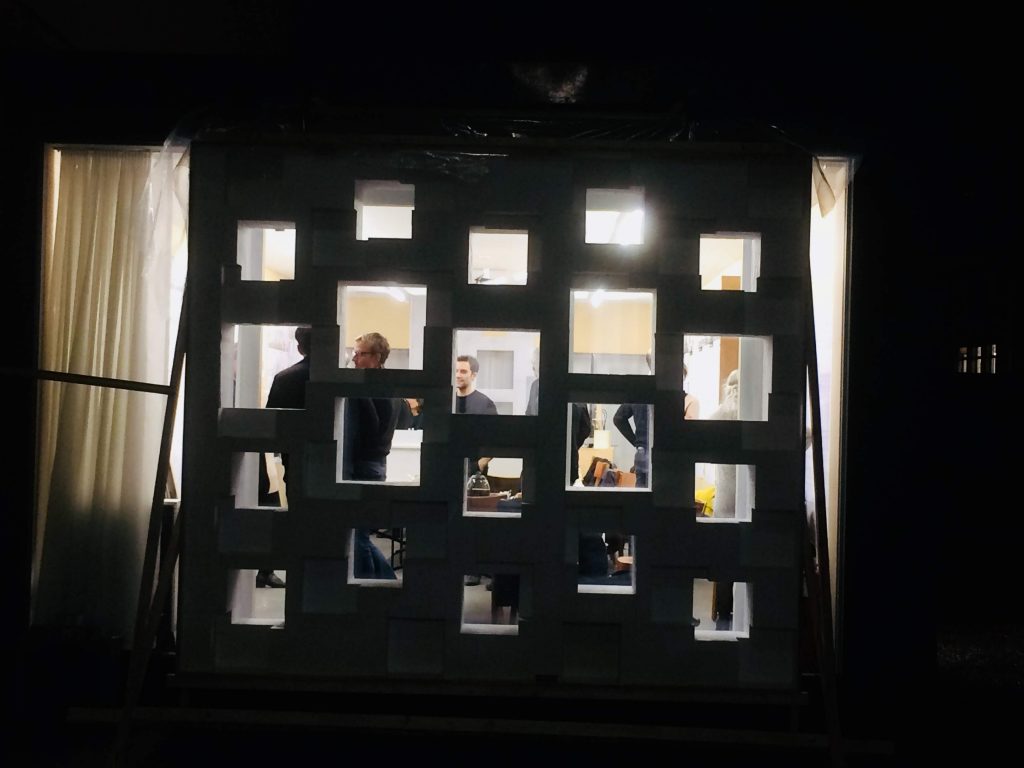 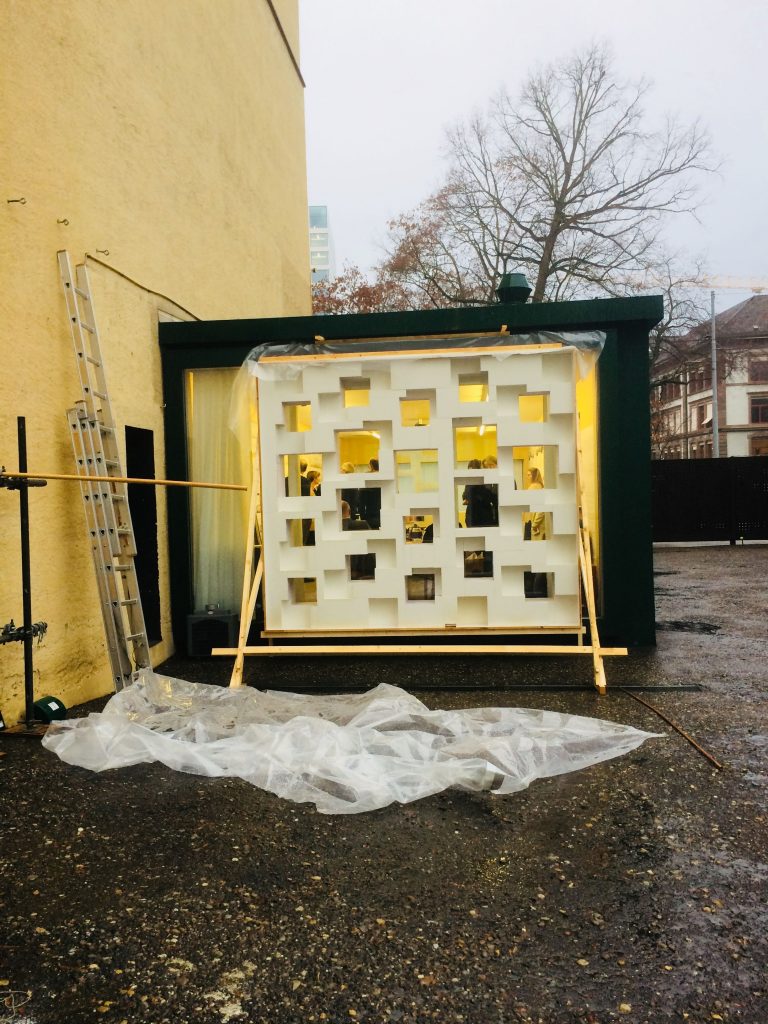 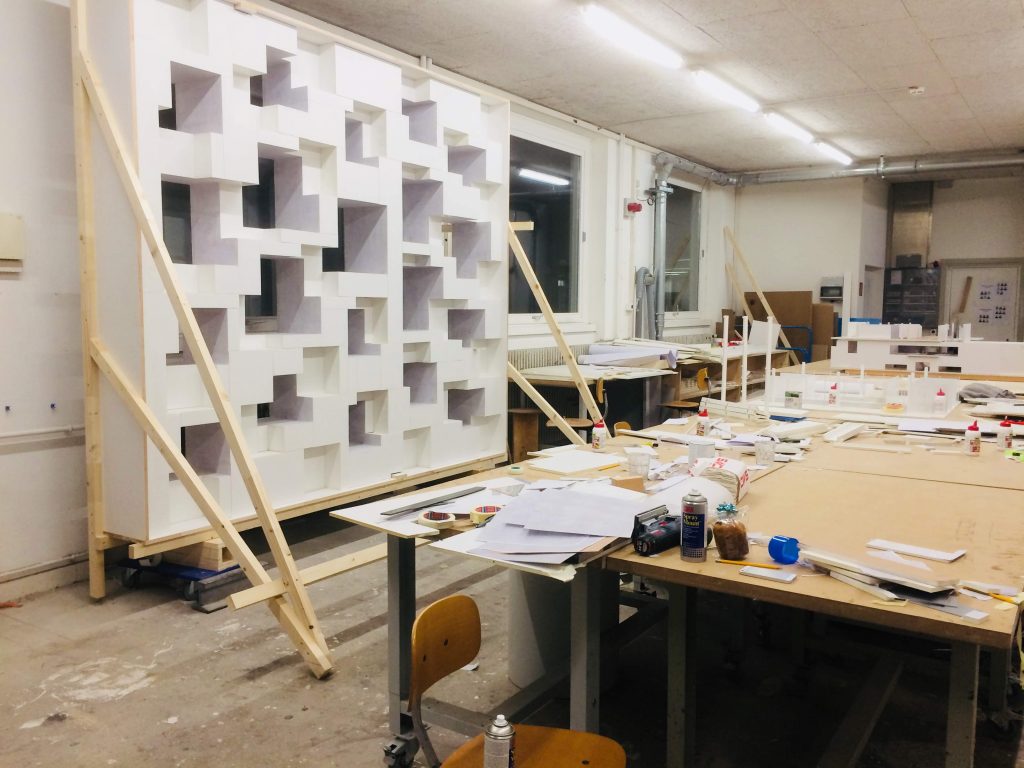 Façade mockup of the Museum of the 20th Century. Images: Courtesy of Jonathan Caron

While Herzog & de Meuron works in scales ranging from private houses to urban design, small projects remain rare, given the firm’s stature. “It was an incredible opportunity for me,” he says.

In addition to working hard, Caron took part in the social life of the office, playing beach volleyball and eating lunch with colleagues. He also organized the annual Christmas raffle that raised money to buy musical instruments for a favela in Brazil. “I would gather the whole office in the cafeteria twice a day to raffle off the prizes.”

Before his term ended in August 2019, he bought a set of the complete works of the firm as a souvenir and succeeded in having the founding partners sign and even sketch in the books. “I was extremely happy with my experience,” he says.

I’m happy I went to Carleton.”

Caron had taken a year off school between third and fourth year to take this extraordinary opportunity, and now it was time to go back. He returned to Carleton in September 2019 to complete his fourth and final year.  During the inaugural 2020 Hobin Prize the jury praised Jonathan Caron and Sarania Dabbe for the experimental and innovative ways of imagining the city by proposing new forms of urban housing. They had developed an immense mega-structure made up of individually refined house designs.

While studying at Carleton, he lived with his family in Gatineau, QC, and cycled to school. “I’m happy I went to Carleton,” he says. “The classes I did were really good. The professors encouraged us to go beyond the status quo, but with a foot in reality.” A highlight was the Directed Studies Abroad trip in February 2020 to Chile. “It tightened the bonds between students. We got to pick our projects. We were so free.”

He also valued how much time professors spend with students, including one-on-one, compared to his experience in Berlin, where professors are typically also involved in practice and less available. “At TU, they would come two or three times a semester for crits. You’d always be with the teaching assistants.”

While in Ottawa, Caron texted a senior partner at Herzog & de Meuron inquiring about a summer job and was offered a four-month position. He completed the BAS program in April 2020, and one month later, in May, he navigated the complications of travelling during COVID-19 to return to Basel.

At first, he was assigned to a hotel project for Seattle, WA. “It was great for me to learn how to do a budget Herzog & de Meuron building,” he says. “I was mostly working on the façade, renders, plans, and massing models.”

He attended client meetings, helped prepare documents for submission to city hall, and enjoyed “re-thinking” the building during late-evening discussions with the project lead. “I felt I had an impact on the concept.”

Then, in July 2020, management put him on a team preparing for a hospital competition. The competition thrust him into a schedule where he was working from 9 a.m. to 2 a.m. and eating lunch in front of his computer. It was an introduction to another reality of office life.

At the same time, it was “an incredible opportunity” to interact daily with the founding partners.

Caron left Herzog & de Meuron in August 2020 “with fantastic memories” and plans for his next adventure. 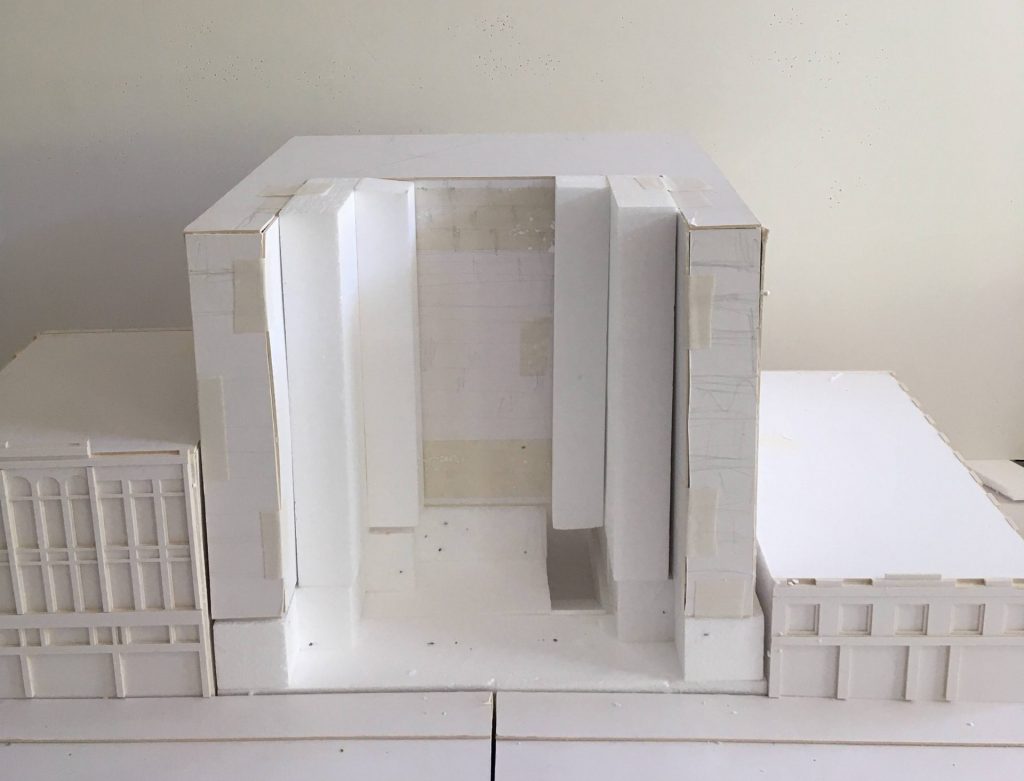 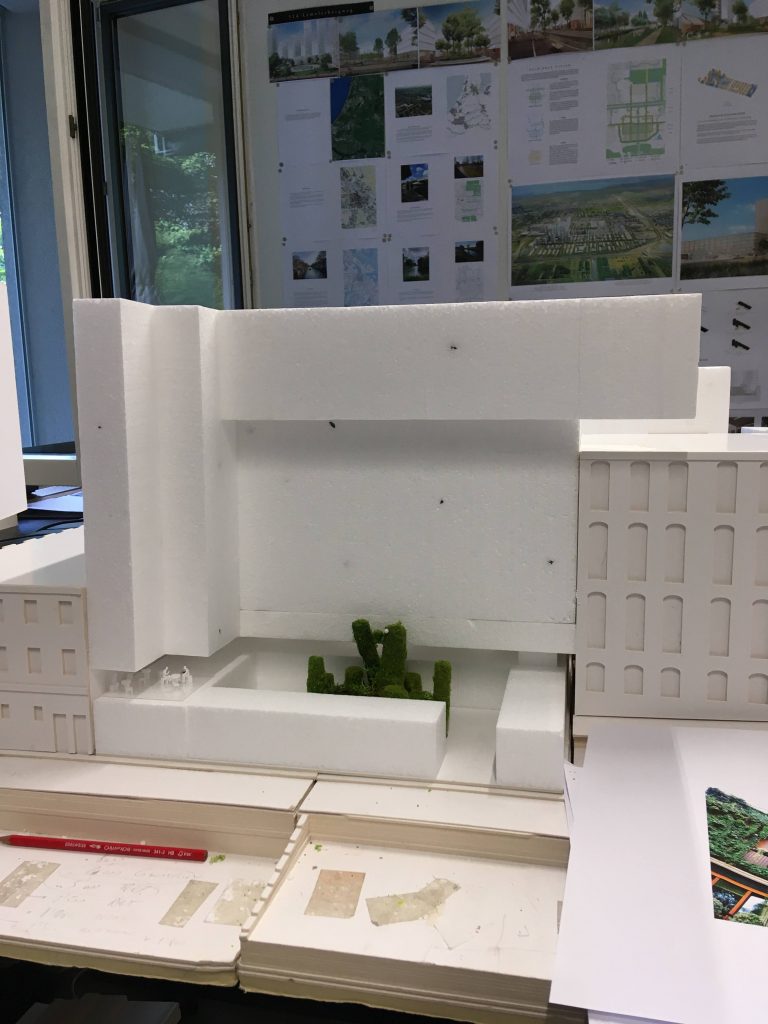 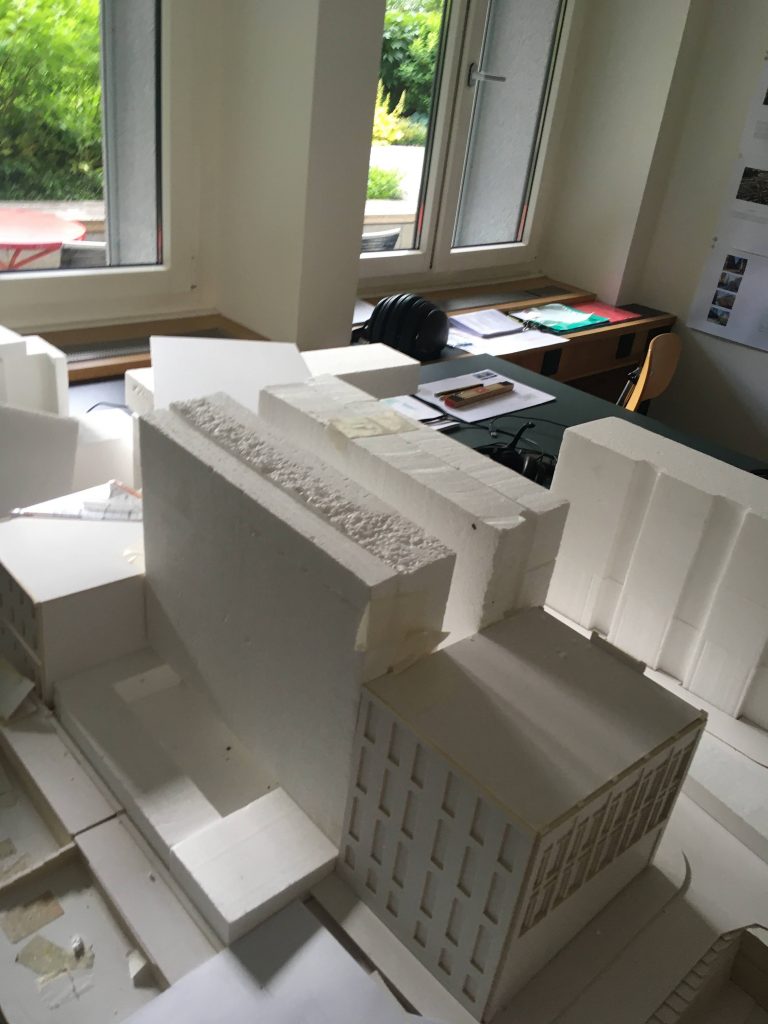 Caron, now 25, attributes his success to asking, showing enthusiasm, and taking the extra step, for example, showing up in person instead of emailing.

“I managed to do things because I asked for them,” he says. “Nobody will ever give you something if you don’t ask. Most people are happy to help if one shows a strong enthusiasm. They want to be surrounded by enthusiastic people. Asking opens more doors than you think.”

Caron offers this advice to students yearning for excitement. “Don’t just send your portfolio online. Go there, smile, show you really want to do it. It puts you in a different category than the thousands of people sending portfolios.”

He adds: “You just have to dare. It’s OK to fail. You’d be surprised at how many times success can also come in the first shot.”

Jonathan Caron has completed the first year of the Master of Architecture program at Harvard University, where he received a full merit scholarship.