Winners of the inaugural Hobin Prize in Architecture & City Building

The prize recognizes excellent work in the fourth-year undergraduate studio at the Azrieli School of Architecture & Urbanism. “Every one of those schemes is something we could work with in our office, something we could build on,” said Ottawa architect Barry Hobin, a graduate of the school and founder of Hobin Architecture, which endowed the prize last year. 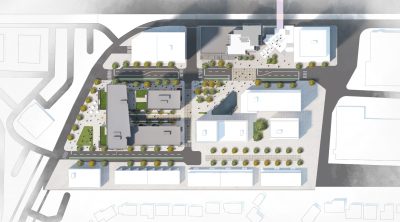 The first prize of $2,000 goes to Adam Achtenberg and Gregorius Erico for BY45, a project that envisions dense, transit-oriented residential development on the 7.8-acre site of the Ottawa Citizen building. They describe their project as “porous” at the ground level, to be shared by residents and the broader community. A video that moves around the buildings and shows the public spaces they frame helped to convince the judges. 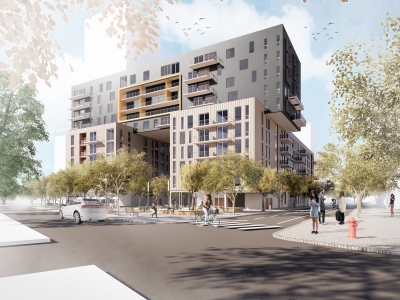 “BY45 was designed to be a human-oriented place,” said Achtenberg and Erico. “The connection between it and the new LRT bridge coming off Baxter Rd. was our main concern.”

The jury awarded two second-place prizes of $1,000 each. 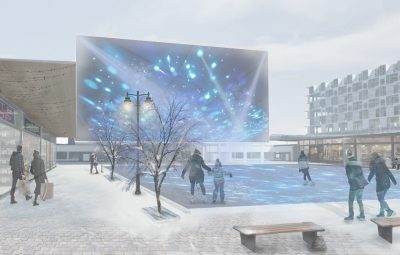 Urban Theatre, by Kim Langat and Ashlin Lithgow, is a proposal for a mixed-use development and creative hub on the Dustbane site adjacent to the Ottawa Train Station and the Tremblay LRT Station. It imagines a theatre, acting and dance school, and maker space at its heart. “Our site is a place to encourage a creative community with one main central space where the community comes together,” they said. 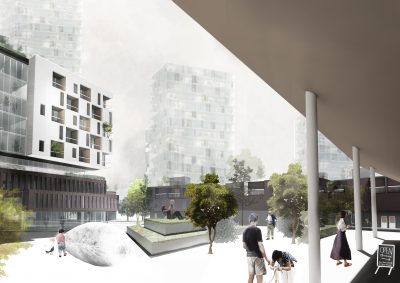 Piazza, by Yoyo Tang and Laura Ye, is a scheme for a high-rise development on the Ottawa Citizen site. An open square gives the project its name. It is green and sheltered by tall buildings from the noise of the nearby Queensway. “We introduced community spaces, such as grocery stores, a community centre, parks, and outdoor markets to compensate for the busy and densifying transit-oriented site,” said Tang and Ye. 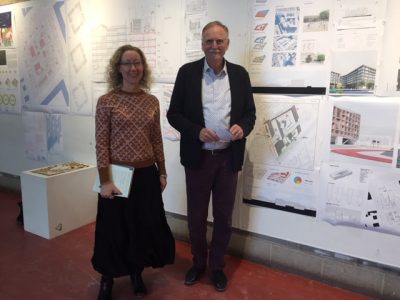 The focus of the fourth-year undergraduate studio is urban housing and community building. Conceived by Professor Benjamin Gianni, this mandatory capstone studio brings together students from all three undergraduate majors – Design, Urbanism, and Conservation and Sustainability – to study possibilities for the redevelopment of sites within the city. Since 2015, the studio has received sponsorships from local developers, who join architects, city staff, and community members in spirited discussions around the student work.

Hobin personally presented the awards at a well-attended ceremony at the end of the day in the PIT. “I found the work to be extraordinary,” he said, adding that the three winners demonstrated how increased density and high-rise residential building types could contribute to urban public space if animated by “ideas of city-building.”

He stressed to students the importance of being able to clearly and succinctly describe a scheme, both verbally and visually. “All of you have done a bit of master planning and then buildings that speak to the master plan,” he said. “What’s the big idea that you pursued?” he asked, adding: “The second criteria is context and public realm. All these sites will be phased and built over time. You can’t wait until the end of the project to do something interesting.

“In terms of Canadian architecture now, it’s about designing for the city,” Hobin told the students. “One of the things we think really strongly about is the public realm; how those buildings come together to create and enforce places, as opposed to being objects standing by themselves. In an economically driven equation, how do you do things in a guerrilla fashion to make the public realm better?”

In addition to the winners, the jury praised three projects that experimented with innovative ways of imagining the city by proposing new forms of urban housing. 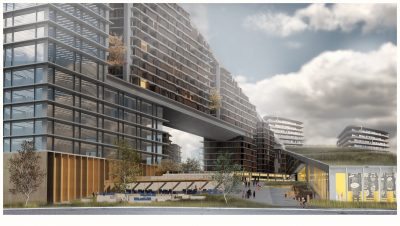 Jonathan Caron and Sarania Dabbe developed an immense mega-structure made up of individually refined house designs. 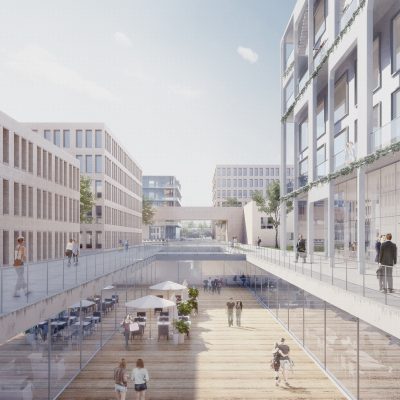 Guanlin Li and Lesley Li demonstrated density with modest-scaled buildings and pedestrian streets sensitive to the grain of existing neighbourhoods. 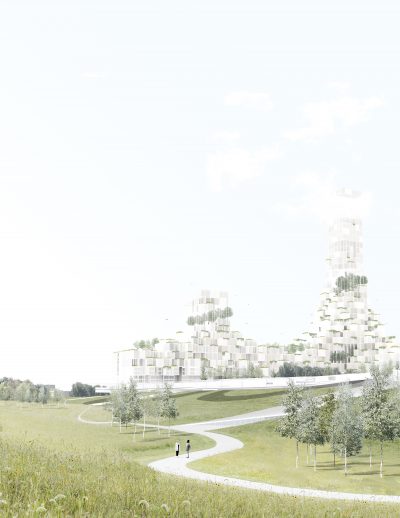 Zak Hamza and Charlotte Keskinen-Keith explored a modular structure giving many possible house sizes and arrangements together with a “vegetated oasis.”