Winners of the 2022 Marco Frascari Prize in Architecture for Drawing

The 2022 Marco Frascari Prize in Architecture recognized two winners each for the first, second, and third prize categories at an awards ceremony on March 29.

The results are “a mark of the high calibre of the work submitted,” said Interim Director Frederica Goffi. “The international jury was unanimous in the recognition of the work. Congratulations to all those whose work was acknowledged by the jury.”

See the call for works and jury here

See the work and jury comments below.

“I was very pleased to see 26 excellent entries in the Marco Frascari Prize this year, which emphasizes hybrid drawings merging handwork and digital craft in conveying micronarratives in architecture research at the graduate level,” said Goffi.

She noted that Devon Moar’s submission earned him an invitation from Niall Hobhouse — founder of Drawing Matter — to expand his writings on his first prize entry and publish it along with his drawings on the Drawing Matter archive website.

“I am grateful to the jurors, Dr. Suzanne Ewing (University of Edinburgh), Niall Hobhouse (Drawing Matter), John Cook (ASAU), and Adriana Ross (ASAU), for being with us on March 29, which would have marked the birthday of Marco Frascari (1945-2013),” said Goffi.

“The collective readings that emerged from their discussion were enriching and opened up the significance of architectural drawings as material artifacts communicating ideas and thoughts.”

This year’s competition invited students to use drawings as demonstrations offering clues of micro-stories and narratives in development. Recipients must have demonstrated excellence in the practice of hand-drawing and have developed a critical understanding of the craft and role of drawing in architecture. Submissions may also have included hybrid drawing (hand/digital).

“It’s brilliant to have a prize like this that focuses on drawings,” said Ewing.

The prize was endowed in 2013 by Dr. David Azrieli in memory of Marco Frascari, former director of the Azrieli School of Architecture & Urbanism.

Today there is no remaining marine environment free of plastic waste. Trash Towers collect the plastic, compress it into brick-like building blocks, and stack it above or below its main structure to create large towers of plastic. As the towers approach the shore, their size and multitude are impactful, putting a scale to the damage we have inflicted on our oceans. It would take thousands of Trash Towers to eliminate the Great Pacific Garbage Patch.

Jury Comments: The jury called it memorable and atmospheric. They noted it had the sense of an engraving and engaged with a contemporary issue. Adriana Ross observed that “it takes an enormous degree of skill and vision to create a beautiful world from ugliness.” Suzanne Ewing appreciated the panoramic immersion. “It’s a mega story; the impossibility of managing the great Pacific garbage patch,” she said. “What’s very beautiful about the drawing is the urban and the oceanic are sort of merging together. It genuinely feels that it is a world being made, even if it’s a world that raises a question that’s very complex.”

How Big is Big – Does Scale Matter?

A Reflection on Scale in Architecture and Drawing

The bee drawings illustrate that scale is relative and is part of a wider description of interrelationships. Once size and proportion are understood as a system of relationships between objects – scale is inferred – thus, does scale matter? It must, when associated with the process of production, in order to understand the size at which to create something, the amount of information which is required, and the time needed to complete the process. 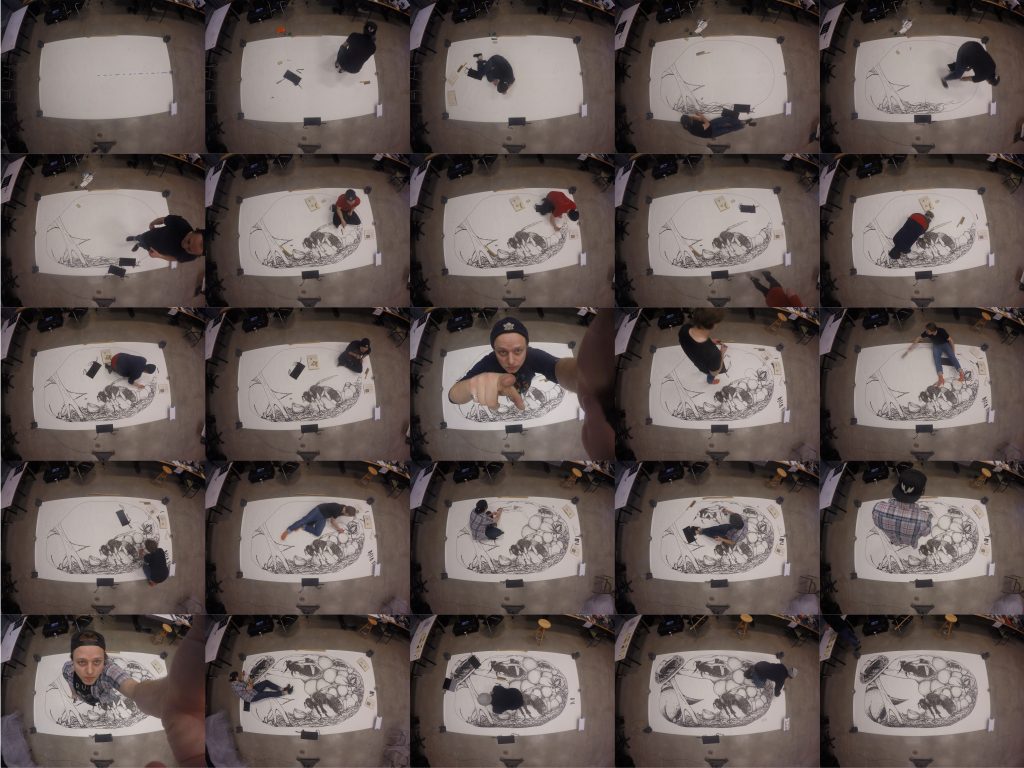 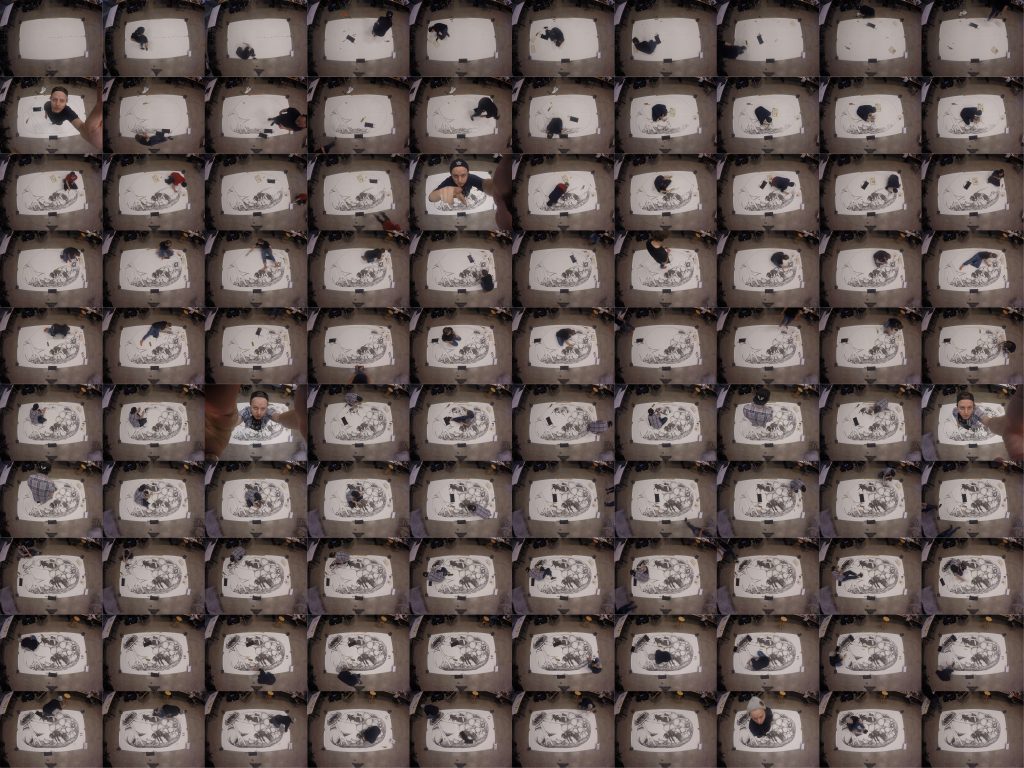 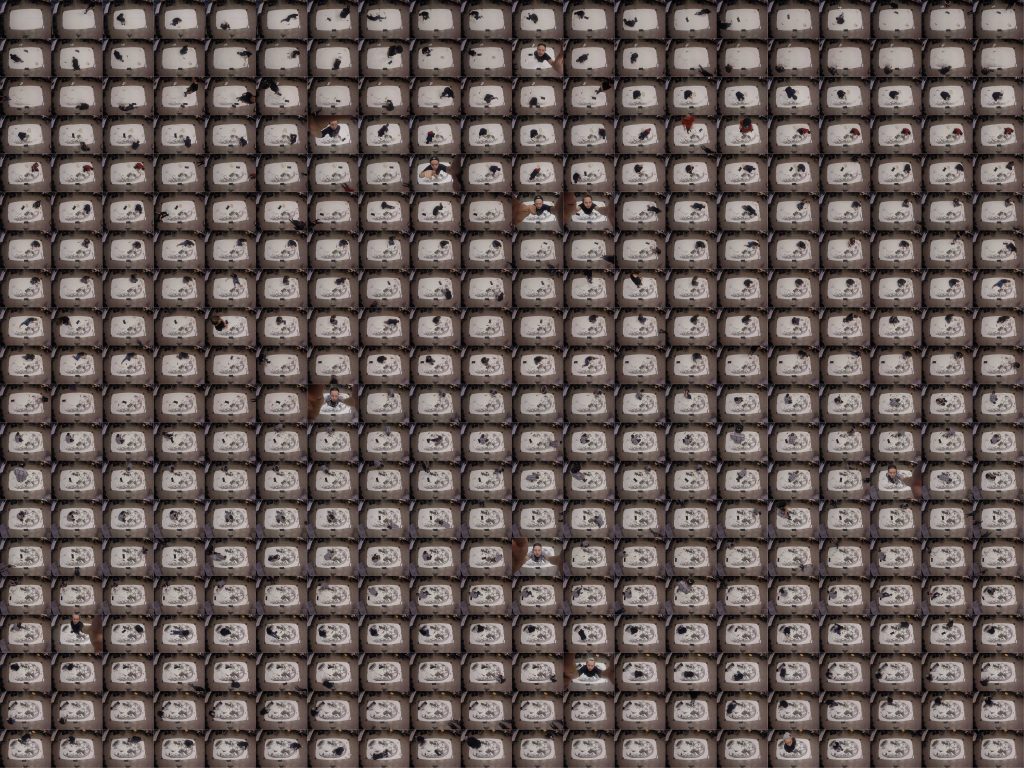 Jury Comments: The jury enjoyed the fact that drawing was the subject as well as the medium for communicating and inquiry into scale. “It gives a chance for the audience to zoom in and out and appreciate the complexity and beauty of different scales of representation,” said Adriana Ross. “There was a real question here about scale, and it was a question about the world around us and about drawing,” added Niall Hobhouse. “You took what might have seemed a kind of playful choice of subject which you then approached in a very rigorous way to produce something which must have been incredibly complicated to produce.”

This series narrates moments of landscape transformations on a copper mine site in Flin Flon, Manitoba. It is based on thesis research that considers several responses to a landscape that is the marker of millions of years of geological activity, as well as more than a century of resource extraction. The site’s geological past, extractive present, and imagined futures are represented in three drawings, creating interactions and simultaneous existence between various timescales and energetic forces. 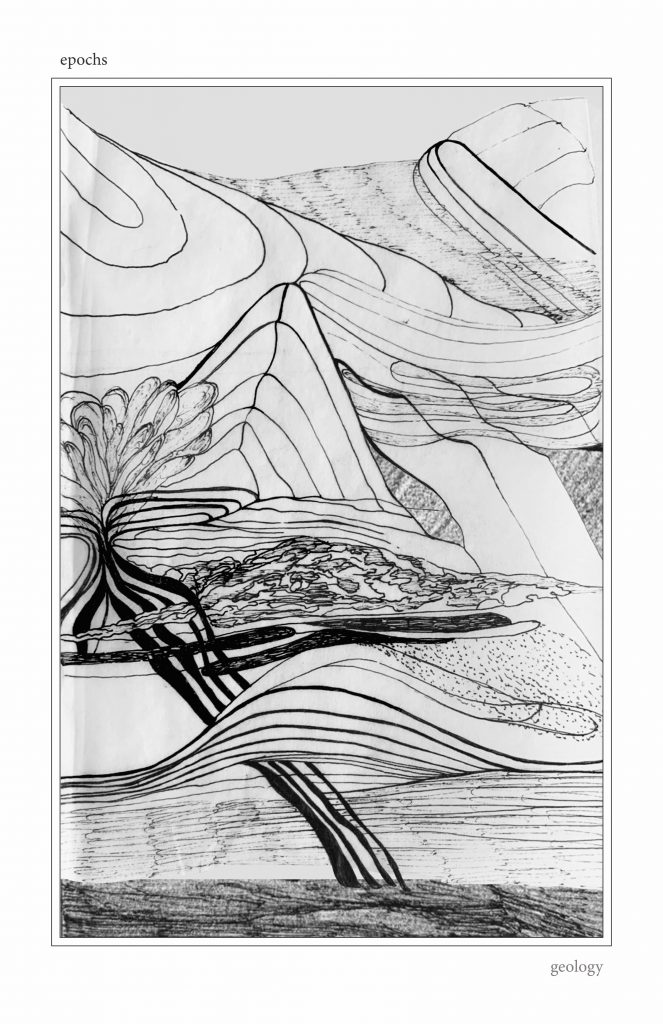 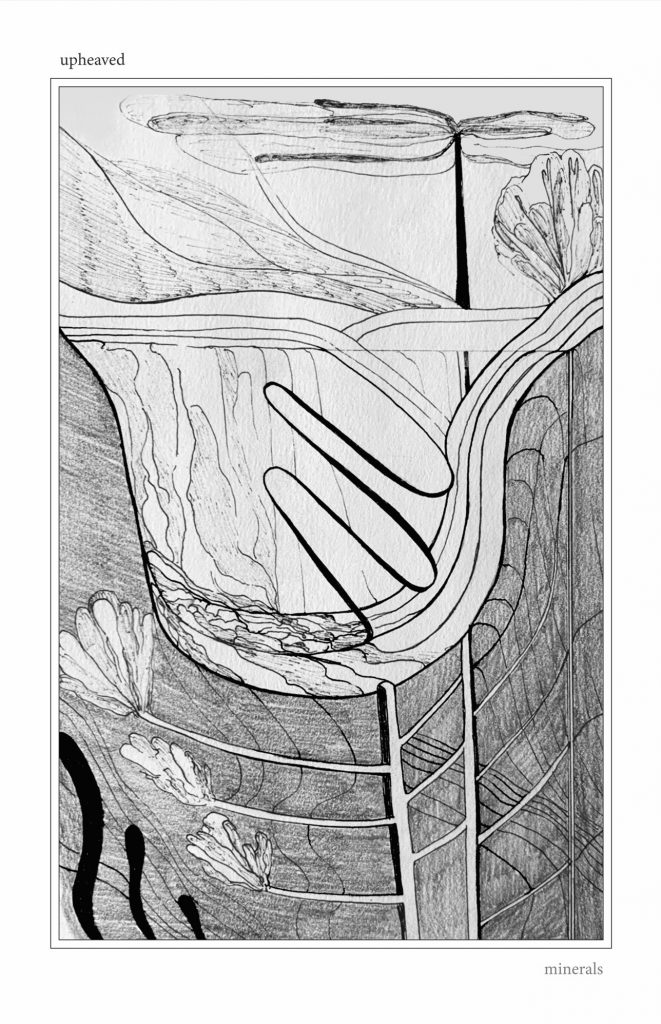 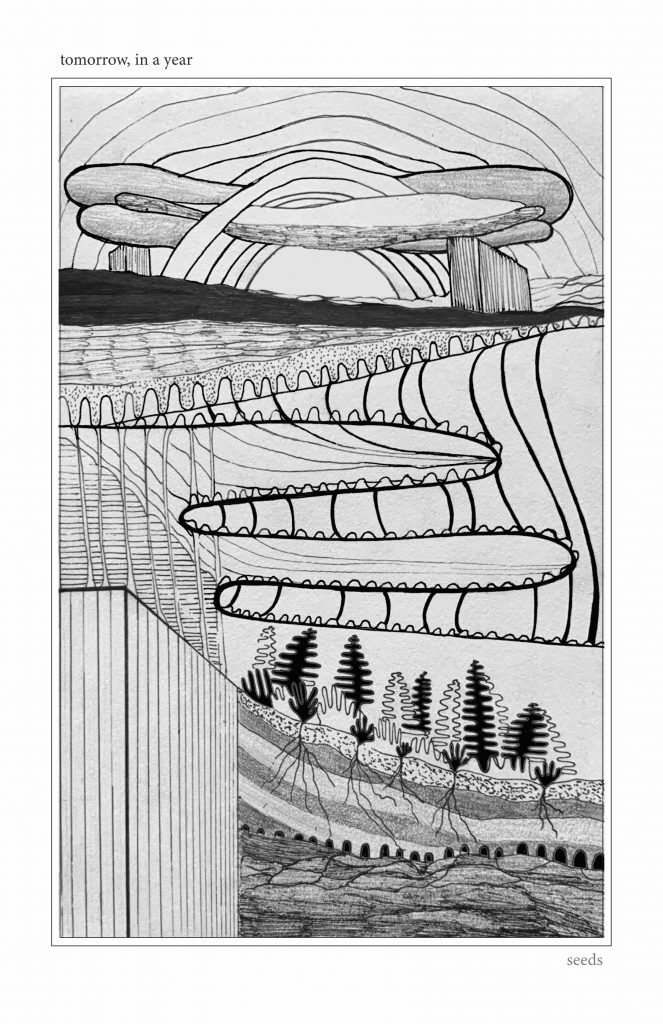 Jury Comments: The jury called the drawing intriguing and “well-judged in weights and balances.” They praised the “poised” storytelling and composition. “Although hand drawing is not an absolute requirement, this is one that really seemed to come from the hand,” said John Cook. “The drawing invokes a world, and it makes use simultaneously of things observed and things known. We see use of the conventions of section, elevation, view, and perspective. At the same time as it makes use of knowledge and thought about natural processes, time and geology taking place at totally different time scales. It’s a drawing which is a thought piece.”

The thesis drawings explore Al Fahidi district, a historic neighbourhood in Dubai, United Arab Emirates, to investigate the implications of materiality, microclimatic conditions, light and shadow in spaces inside, outside, and in between. Given the wide range of demographics and ethnicities in Dubai, spatial segregation, exclusion, and inclusion are often spatial issues. Can light, shadow, materiality, and environmental conditions help conceal or disguise, if only momentarily, one’s class condition and identity in space? 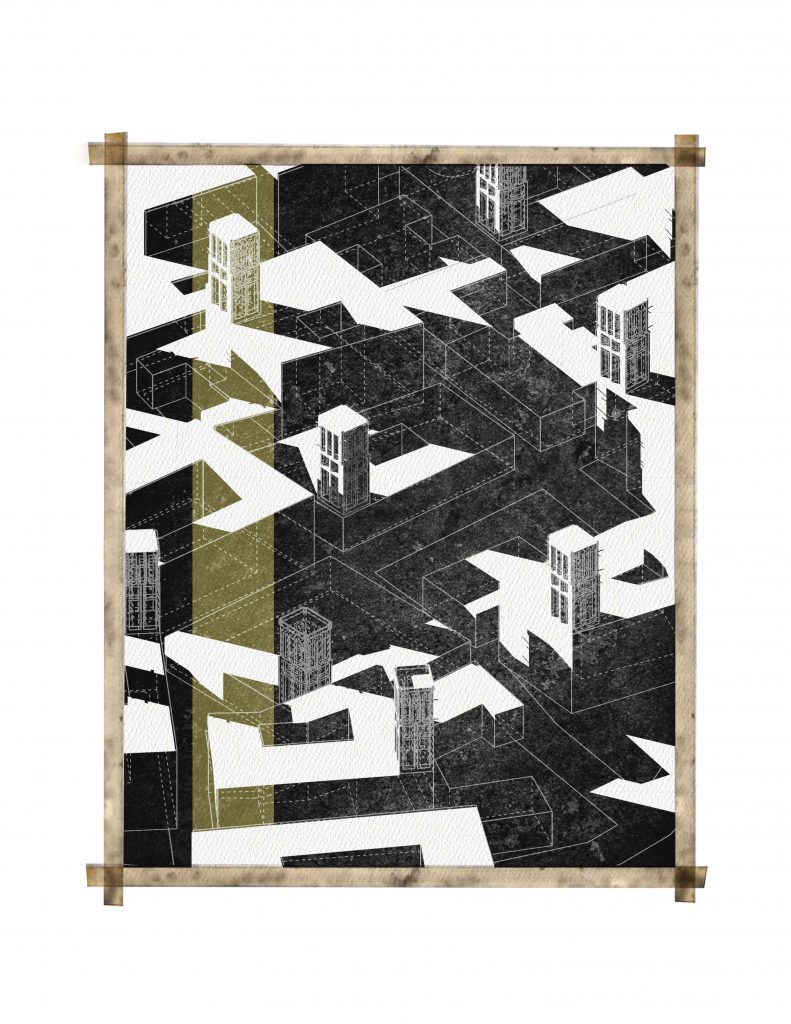 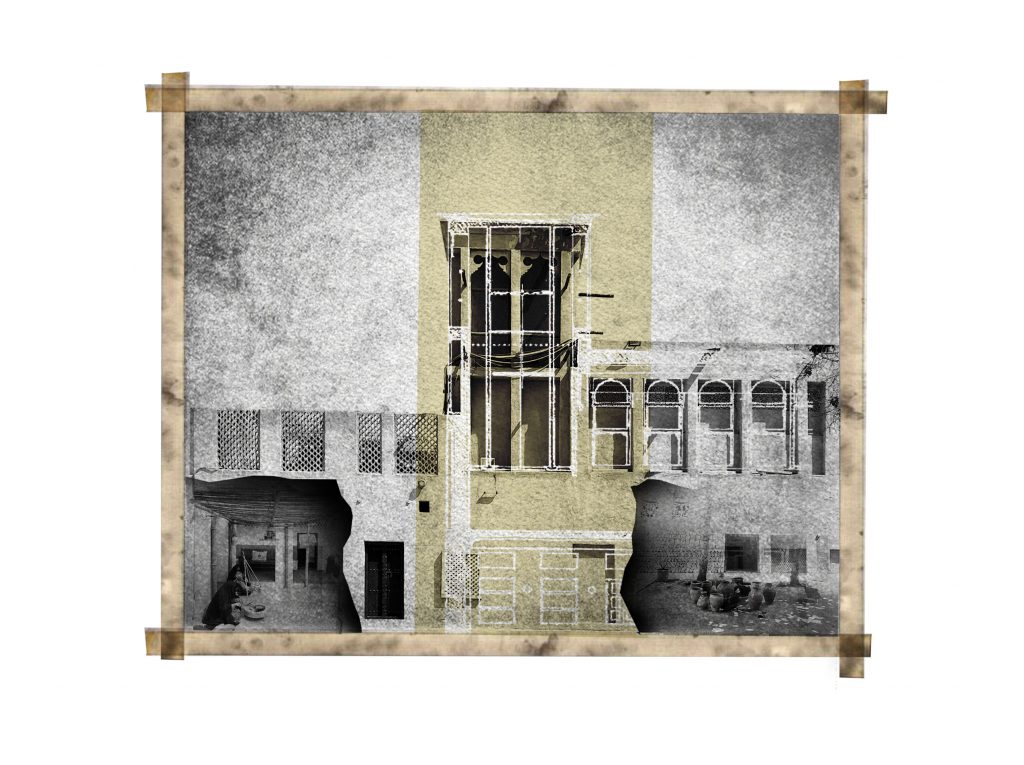 Jury Comments: The jury called it very skilled as a constructed drawing and appreciated the depiction of climatic extremes as well as sense of inhabitation. “We all agreed that this was another exquisite work,” said Adriana Ross. “The examination of the implication on the surrounding area from microclimatic and materiality changes are powerful, and yet there is this enigmatic veil made of light and shadow gently appearing and disappearing through the walls and streets of the district as a reminder of time. The choice of the use of shadow as a character who shapes and determines the soul of the district is poetic and compelling.”

The drawings follow the idea of non-permanence, abiding to the provincial laws, and deploying movement as a form of recognition of this “now vulnerable and no longer protected land” as Indigenous land. I began to explore a non-prescriptive language of a quilt that extends, folds, curls, and uncurls any which way into the land and how this reinstated mobility (through protest) could help to protect the land and provide land recognition to Indigenous communities.

Jury Comments: The jury enjoyed the idea of the journey, the quilting analogy, and the political issue being raised. “We read it as a kind of fieldwork activism,” said Suzanne Ewing. “What is so enjoyable about this set of drawings is that they are about settling and regathering, and we have a map of the journey at the top. There’s an abstraction about the grid which is obviously to do with that territorial claim to the land, which is at play with the more fluid fabric of the quilting. There’s a lovely temporal inhabitation but worked through in a controlled and beautiful way. Lovely colour tones.”

Being part of this idea of journey, settlement, thinking about the traces, thinking about the inhabitation which may or may not be permissible. What is so enjoyable about this set of drawings is that they are about settling and regathering, and we have a map of the journey at the top. Then there’s the map of the territory and this lovely idea of quilting. Lovely colour tones. There’s a sort of abstraction about the grid which is obviously to do with that territorial claim to the land which is at play with the more fluid fabric of the quilting. There’s a lovely temporal inhabitation but worked through in a controlled and poised beautiful way.” 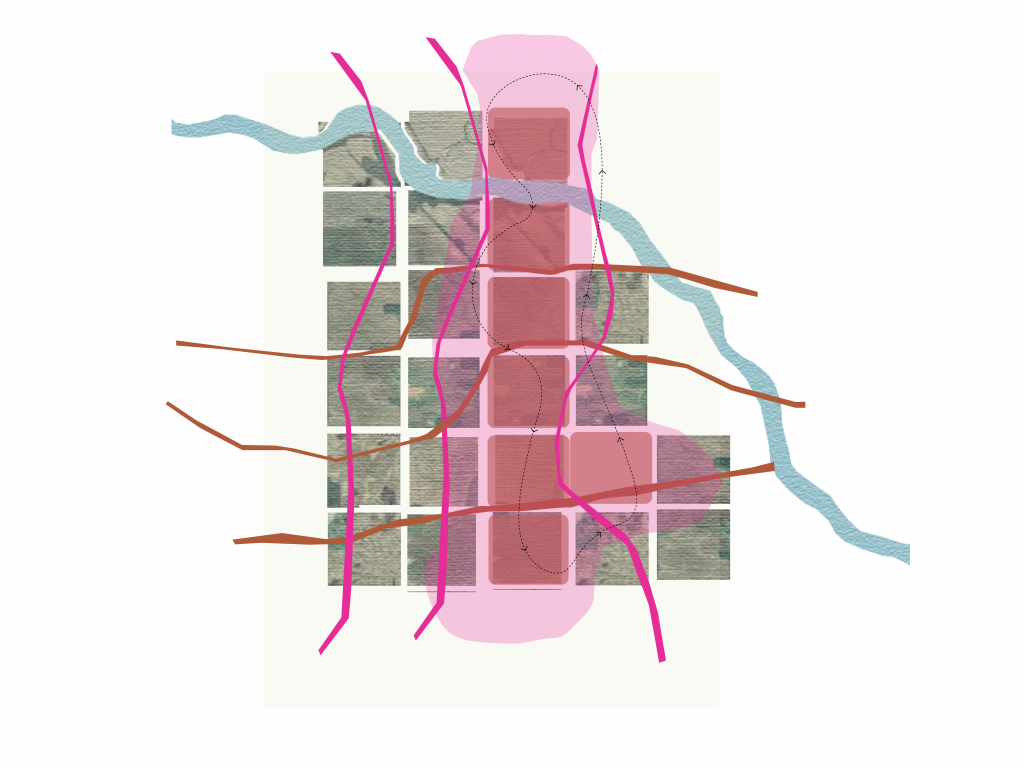 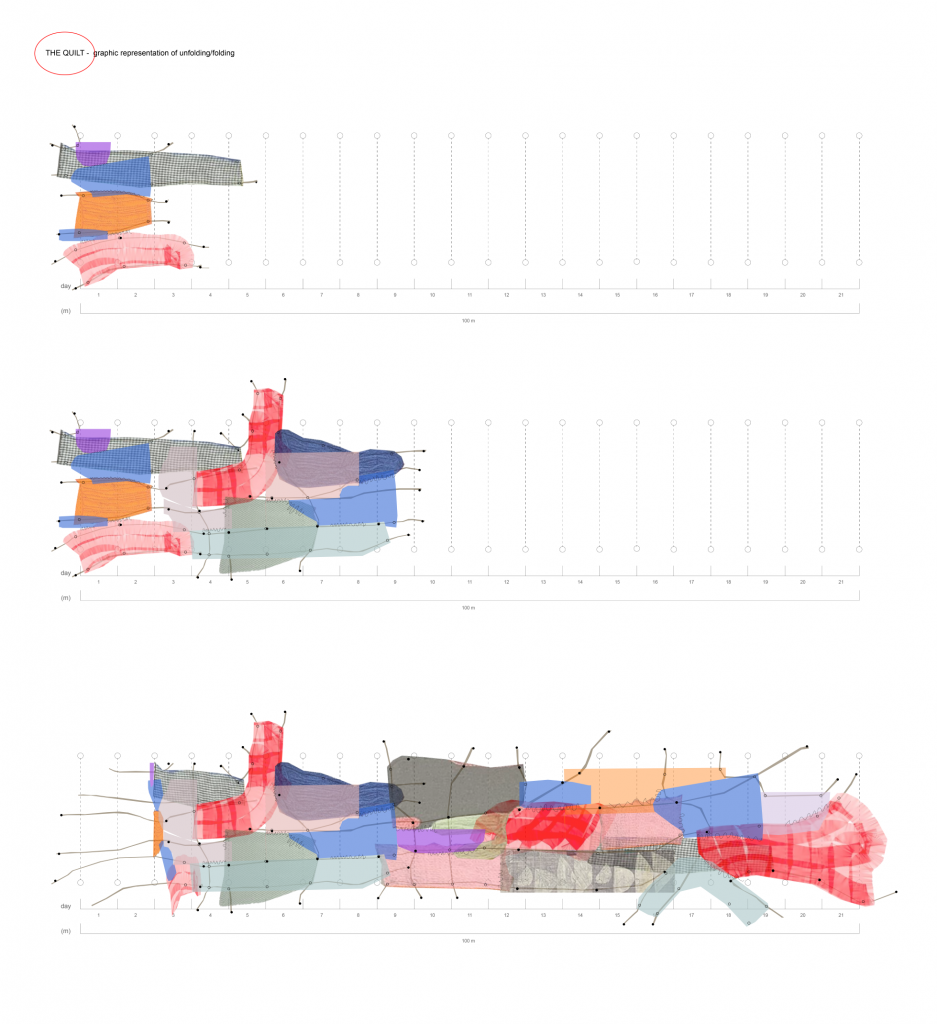 I present a diptych of hybrid drawings of two important sites that inform my thesis work. These are my grandmother’s altar room in Haiphong, Vietnam, and the corner of Yonge and Wellesley Street in Toronto, a key intersection into the gay village. In investigating these two sites of exchange and ritual, I invite designers and architects to collectively consider what spaces emerge when we reconstruct traditions for our ancestors, kin, and our multi-adjectival selves. 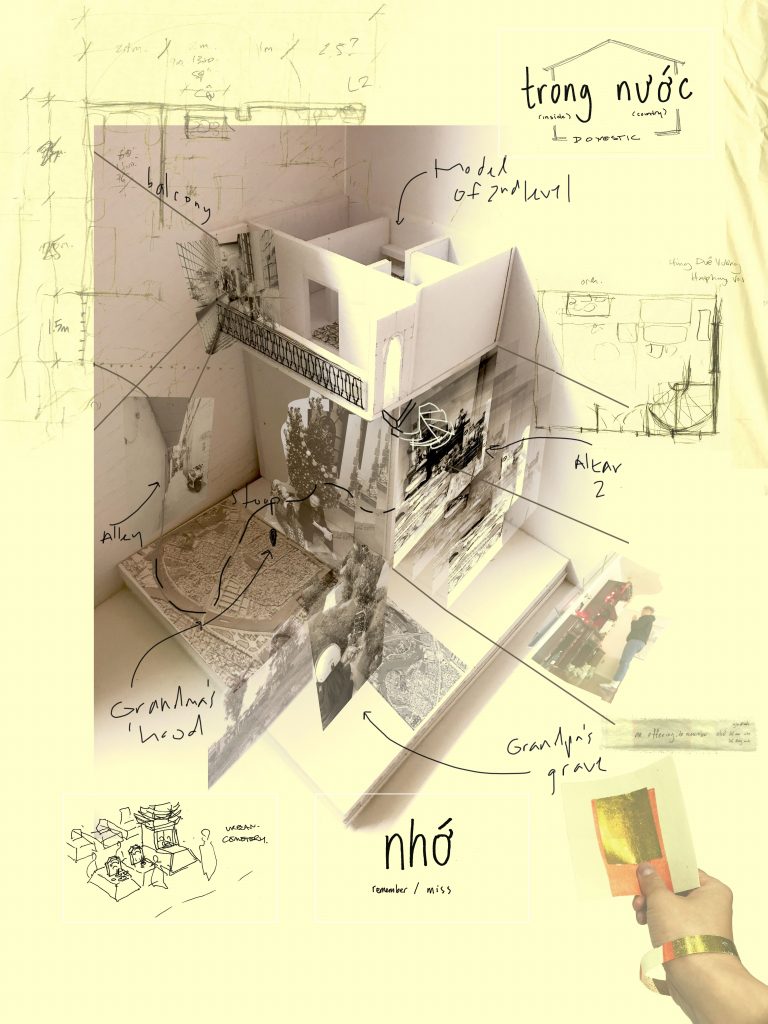 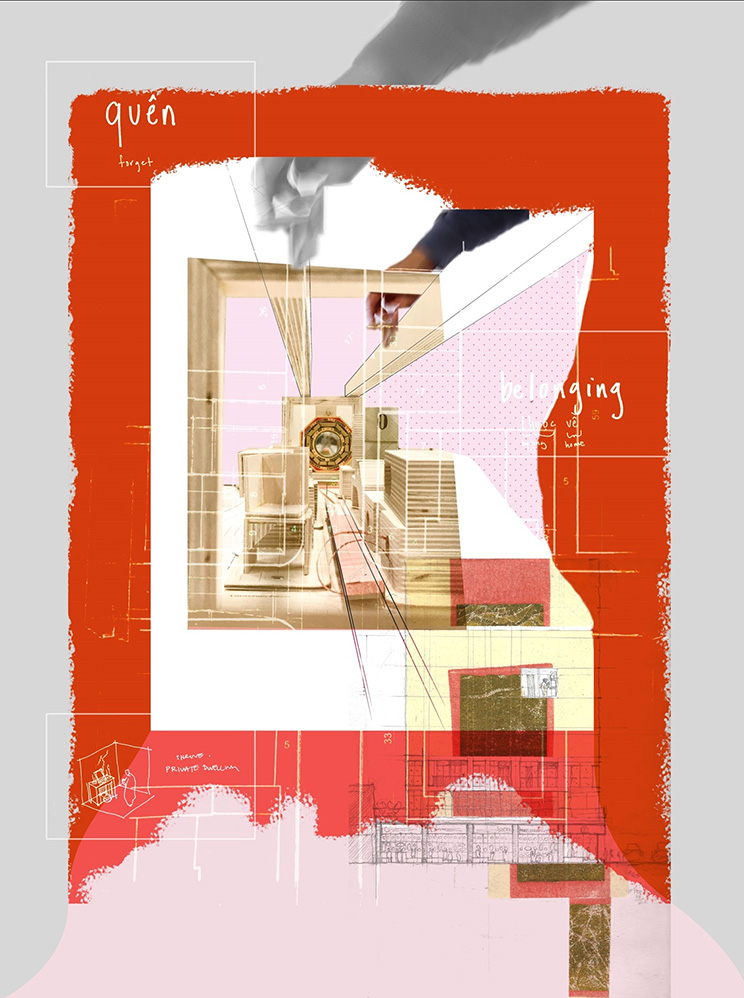 Jury Comments: “The beautiful performance of the overlay of physical model, personal photographs, cards, and hand sketches invites the viewer to examine, engage, and inhabit through different lenses and perspectives the author’s remembered and imagined space,” said Adriana Ross. “For me personally, it was the bravery of tackling something very personal to Thompson’s life, so fearlessly and without compromise,” said Niall Hobhouse. “Making something very public out of something that by your own admission was extremely personal and in a certain way quite painful. You articulated the conflict beautifully, and there was a wonderful correspondence between the text and the work we saw in the drawings.”