A Canvas on Which to Feast: AD publishes work from Azrieli School Option Studios

The special issue, titled Emerging Talents: Training Architects, is billed as “a survey of some of the best contemporary architecture student work in the world.” The 136-page publication is available for purchase in softcover or digital versions here: https://onlinelibrary.wiley.com/journal/15542769 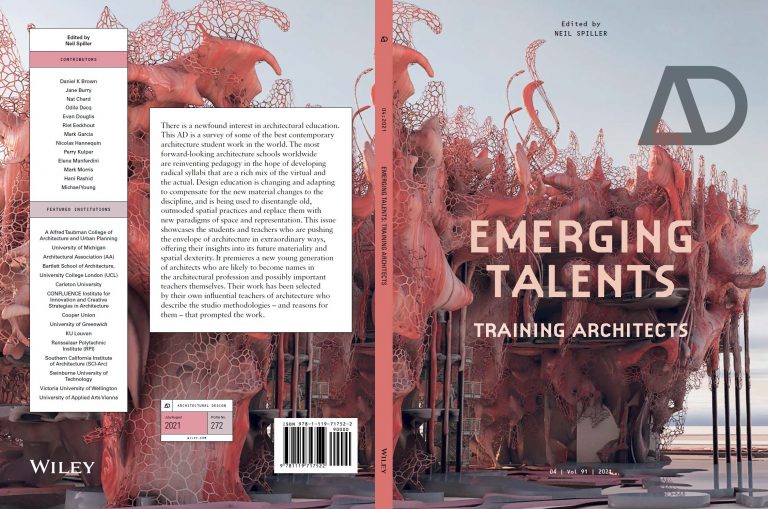 Carleton University’s Azrieli School of Architecture & Urbanism is among 13 featured architecture schools across North America, the UK, and Europe.

“This issue showcases the students and teachers who are pushing the envelope of architecture in extraordinary ways, offering their insights into its future materiality and spatial dexterity,” says publisher John Wiley & Sons Ltd. “It premieres a new young generation of architects who are likely to become names in the architectural profession and possibly important teachers themselves.”

Spiller came to Carleton for the winter 2020 term to run two six-week Master of Architecture option studios. He is the former Hawksmoor Chair of Architecture and Landscape and Deputy Pro Vice-Chancellor of the University of Greenwich in London, England, and editor of AD.

“The milieu suited me perfectly, with its emphasis on hand drawings, art, narrative, poetry, prose, and experiment in both analogue and digital techniques,” he writes in an essay in the journal.

The first studio, A Canvas for the Imagination – The Artist in their Studio, invited students to design a Surrealist artist’s live/work accommodation in Ottawa’s arts district.

The second, Flora and Fauna – Feasting in the City, brought together a cuisine, an animal, and a plant to develop a surreal dining environment.

“Up until then, I had never run a six-week studio, and it seemed very fast; in both cases, the students had to design their buildings in two weeks and spend the next four weeks representing and finessing them,” says Spiller. “The intellectual content of the studio was to reveal to the students the interconnected nature of art, poetry, architecture and its history over the last six decades.”

“There is a newfound interest in architectural education,” says the publisher. “The most forward-looking architecture schools worldwide are reinventing pedagogy in the hope of developing radical syllabi that are a rich mix of the virtual and the actual. Design education is changing and adapting to compensate for the new material changes to the discipline, and is being used to disentangle old, outmoded spatial practices and replace them with new paradigms of space and representation.”