The Director’s Project is a seven-day drawing competition that takes place in the first week of the fall term and celebrates the start of a new school year. Participation is mandatory for undergraduates and first-year master’s students. There are cash awards, including the traditional Murray & Murray Prize, and critical discussion.

This year, on September 9, Director Jill Stoner invited students to make a single drawing in response to the theme “the fierce urgency of now,” from a speech by Martin Luther King. Also, a short poem to accompany the drawings.

Below are the winners and jury comments. To see drawings with their poems, visit the gallery.

Stoner’s prompt encouraged students to explore the intense social and environmental climate through such current events as the Black Lives Matter movement, displacement through war and other forms of conflict, the crisis of climate change, and the effects of the coronavirus pandemic.

More than 400 students submitted drawings in a wide range of media.

One week later, on September 16, the school’s studio instructors narrowed down a shortlist. Then, an international jury representing South Africa, Lebanon, the United States, and Canada, met online to determine the winning drawings. Jury members included Tim Murray, 90, a retired architect, for whom the prize is named.

The results were announced at a Zoom awards ceremony that drew more than 400 guests across 11 time zones, for a “collective conversation that captured the current spirit of our school,” said Stoner. 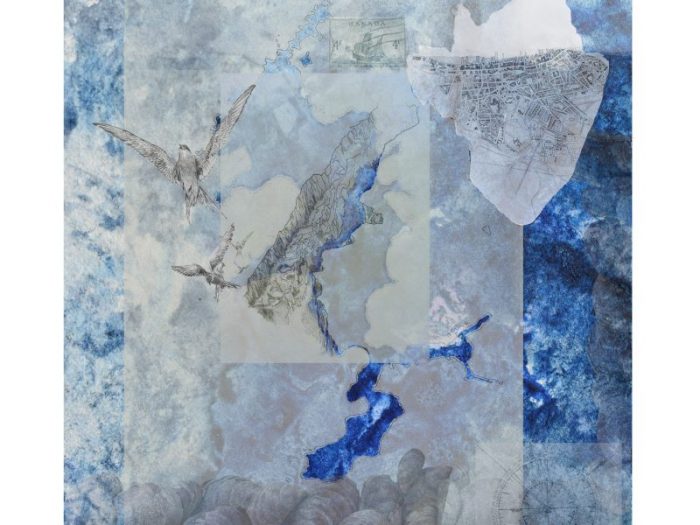 Tim Murray remarked on the captivating elements of storytelling: birds in flight, cities seen from above, flowing waterways, and floating historical markers such as the old postage stamp of a sailing ship.

“It’s a wonderful composition, full of subtleties,” he said. “It has a kind of collage quality about it. Beautifully rendered.” 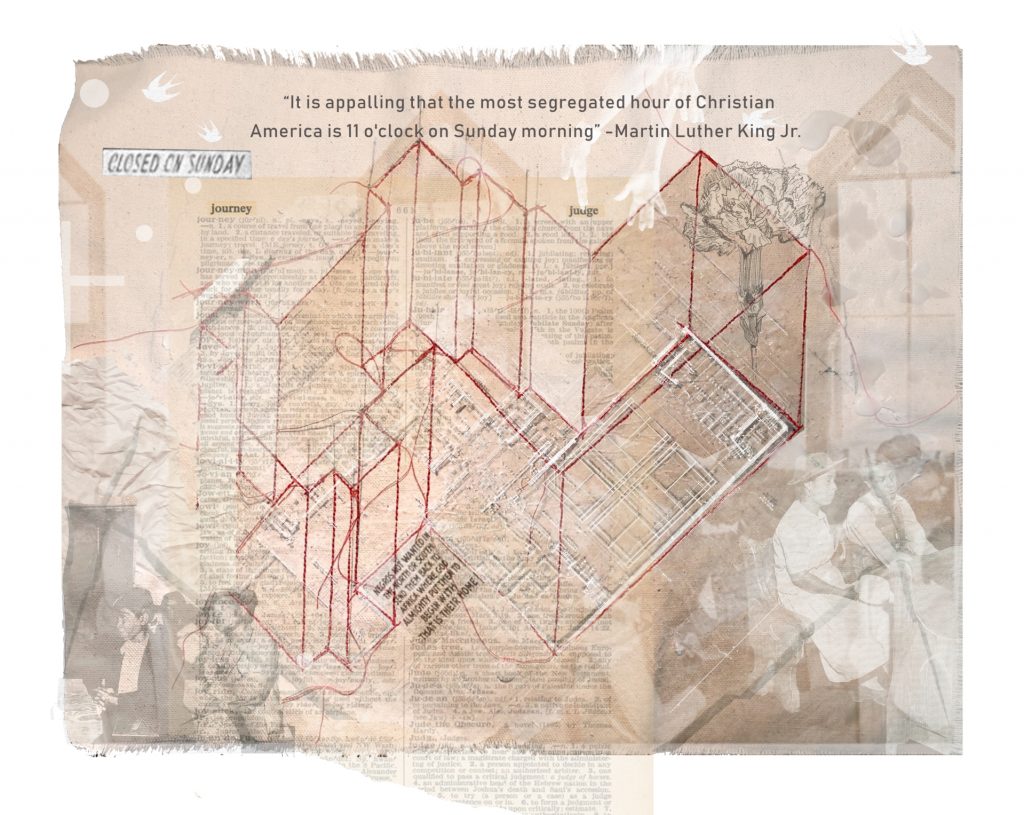 Tim Murray noted the commitment to the craft of making things visible in the thread stitched through the page and demarcating three-dimensional space. “Just the work and craftsmanship alone to be done under the space of a week and then the subtle intrusion of the figures. It’s a lovely piece of work.” 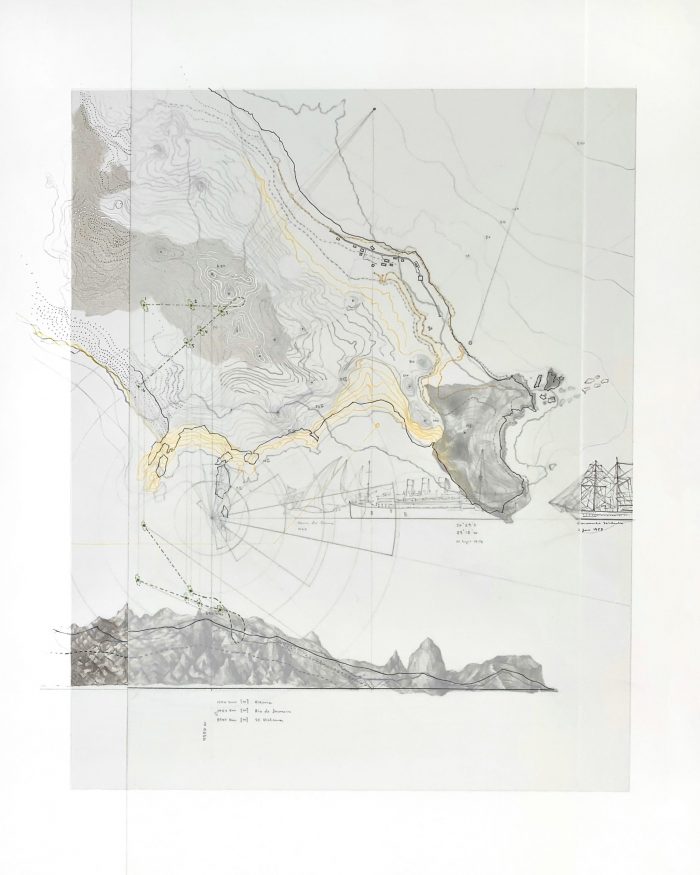 Tim Murray observed elements expressing migration, including a steamship, sailboat, and map. “Migration is right in the foreground at the moment,” he said. “People suffering and the voyage of discovery about where we’re going. There’s a wonderful drawing at the bottom of the sheet showing the coastline being approached from the sea.” 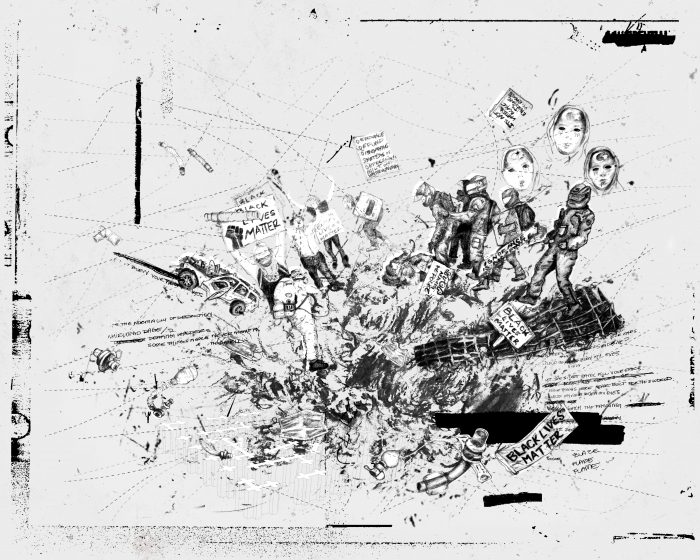 Tim Murray remarked on the explosive energy and “street” quality of the drawing and the “great freedom as they escaped outwards onto the sheet.” Every element appears drawn. “And the nice balance between the intense and dense drawing to the middle third and then the white sheet out. It’s a lovely composition.” 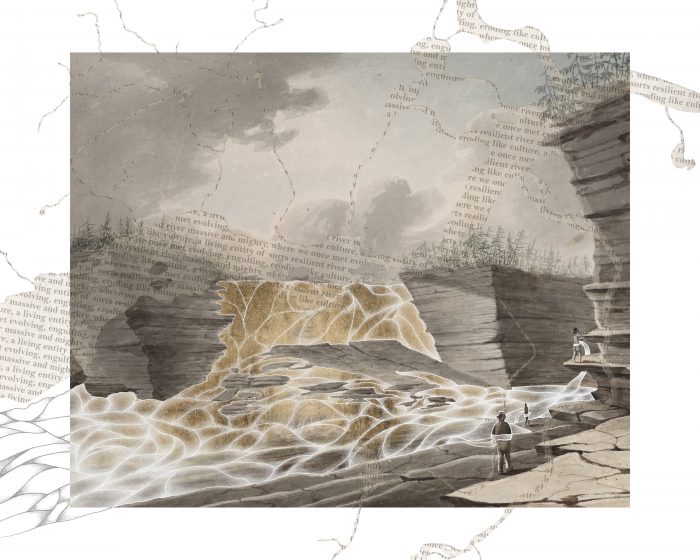 Juror Mokena Makeka, of Cape Town, South Africa, said striking qualities include “the way that the text begins to interrupt the border essentially defining a new territory, the subject who’s pouring out the water into this parched landscape. There’s a transcendent and ethereal quality to this drawing.” 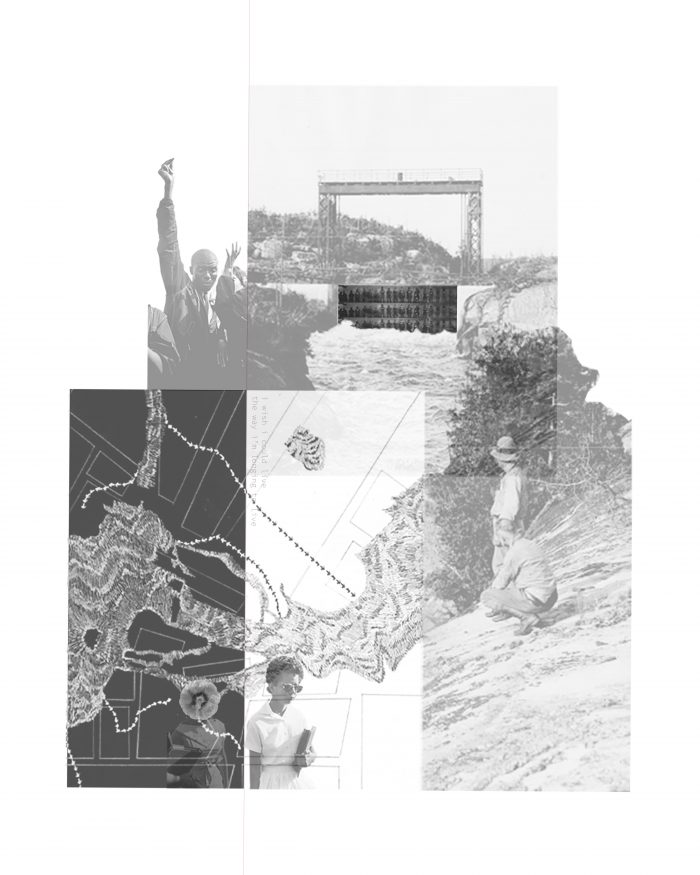 “There is an overlying, really wonderful thesis to the image that seems to be this juxtaposition between nature, industry, and people,” said juror Chris Cornelius, of Madison, WI, USA. “All those sorts of elements are really quite beautifully put together and I think there’s a high level of sophistication in the image.” 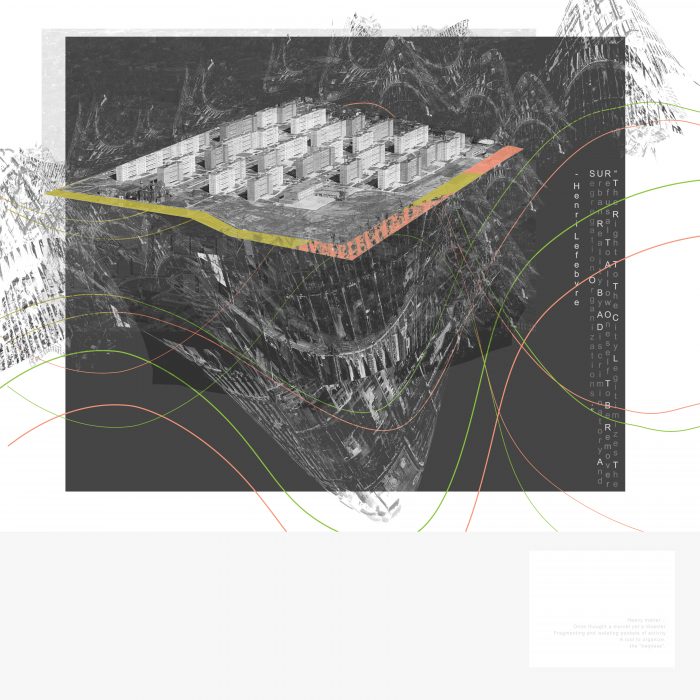 Juror Jennifer Luce, of San Diego, CA, said the imagery speaks to the accompanying poem. “This idea that we have a dream, we have a dream of organizing culture and it really has begun to dissolve. I particularly love how the city is dissolving itself into the earth but also the borders are dissolving on the drawing too.” 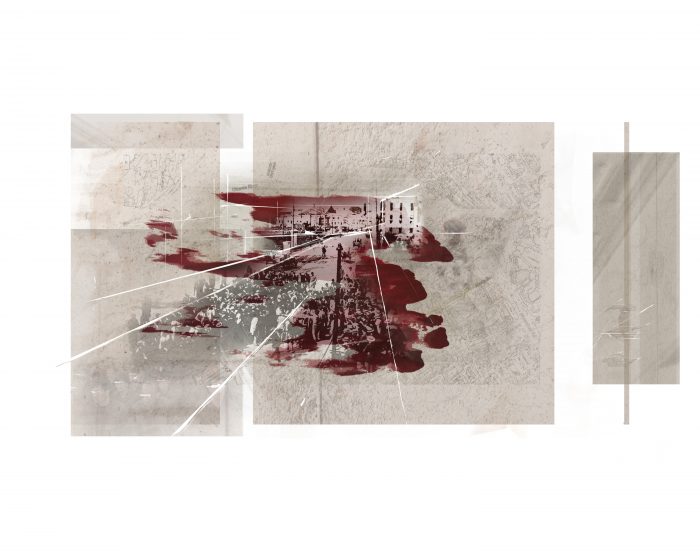 “Sarah uses different techniques and different scale to reveal what I think is beneath the surface of the architectural drawings; the map of our city,” said juror Jenan Ghazal, of Beirut, Lebanon. “The act of breaking the frame gives this drawing another layer of complexity and adds to the colonial violence hidden and drawn over.” 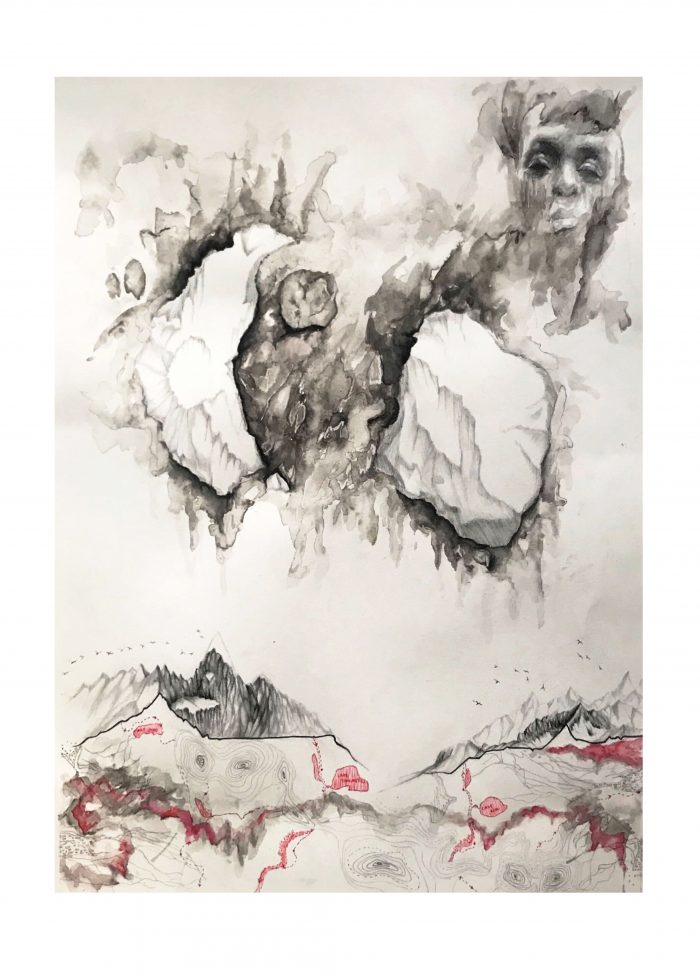 “What struck me is the intentionality with regards to solid and void, light and dark,” said juror Mokena Makeka. “The integration between the human up at the top and the landscape perspective at the bottom was compelling. There’s a sense of desire, a sense of curiosity, a sense of hunger that comes through in the piece.” 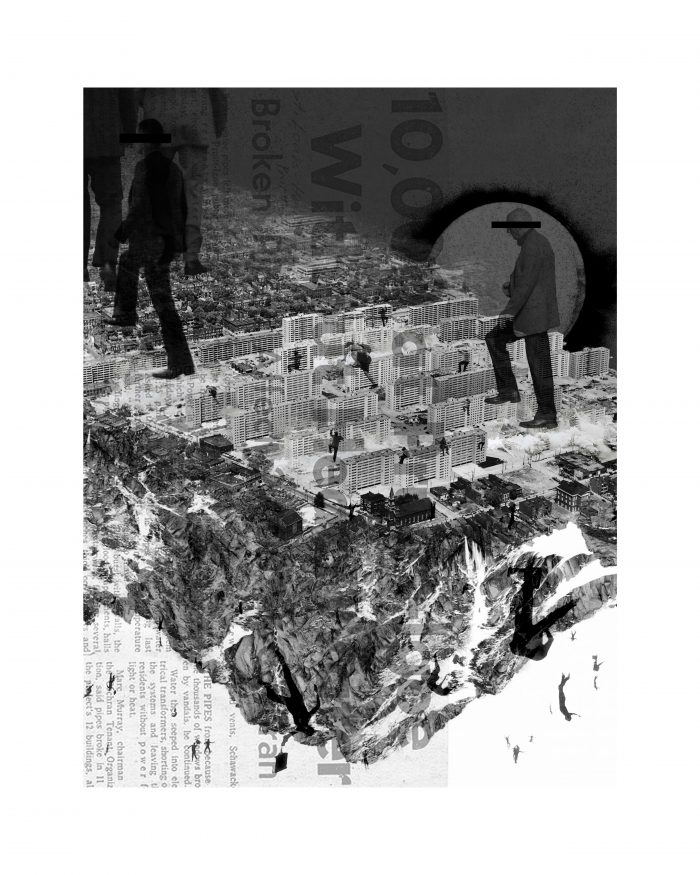 “As I look at the drawing and the scales, the different people walking, escaping the city, you start to think about different opportunities and advantages that people have,” said juror Nicole Nomsa Moyo, Toronto, ON. “Understanding that we fill these unequal spaces and that some people truly fall behind in the society that we’re building.” 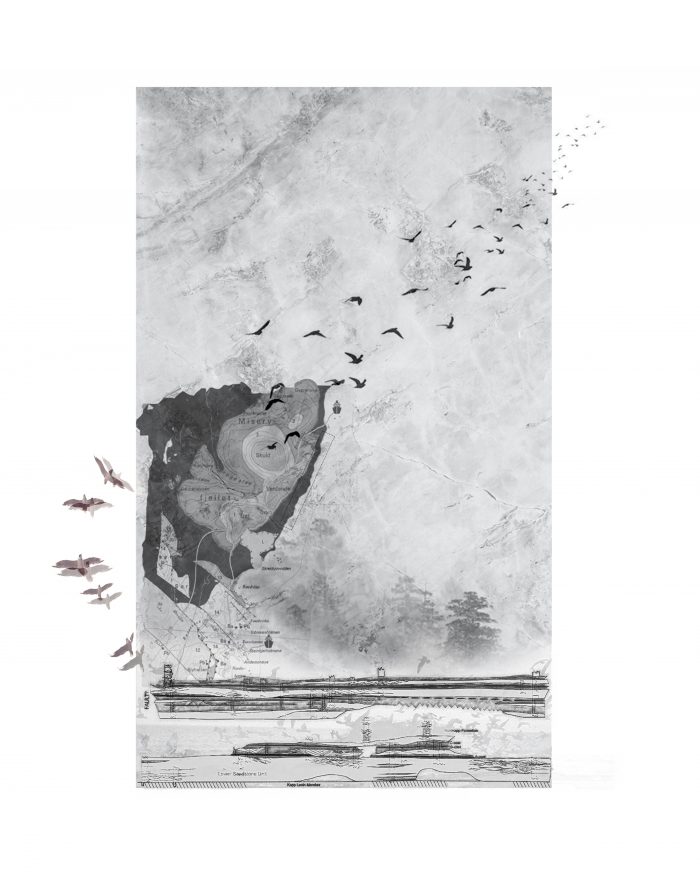 “What I find remarkable about this drawing is that it somehow suggests that a response to this fierce sense of urgency might be qualities that seem almost counter to responding to urgency,” said jury member Prof. Lisa Moffit. “Certain qualities of calm, stasis, of serenity, of peacefulness. There’s something very hopeful about this drawing.”