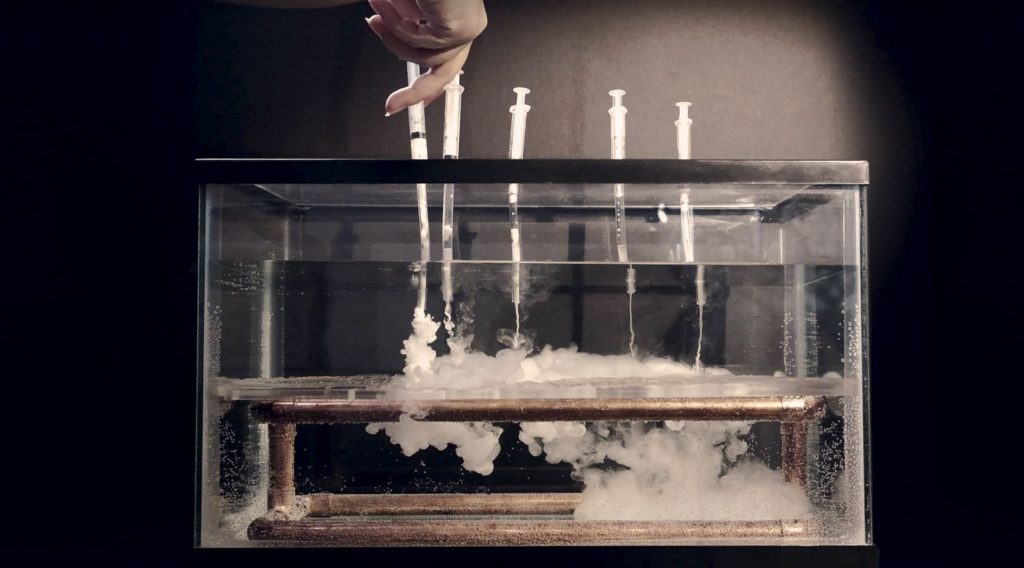 Based on thesis work titled “Borderline Fictions: Spaces of Absurdity in the Korean Demilitarized Zone”, the experiments of this project play upon spaces of absurdity discovered, treating the tank as an investigative tool. Acting as a miniaturized Demilitarized Zone, or miniverse of sorts, an acrylic topography model of the Zone, along with a copper pipe base, provides testing grounds to analyze various border interactions, as well as creating Spaces of the Above, Air, Water, and the Below,
coinciding with paired thesis drawings. Five experiments, one within each “space” identified, were performed, and revealed phenomena usually unseen along the border zone. Experiments included the investigation of Propaganda Balloons and their flight paths, Speaker Wars through the representation of sound waves, the detection of Tunnels of Aggression through the visualization of vibrations, the effect of water currents on Propaganda Bottled Messages, as well as the mapping of flow patterns around Dark Tourism sites. These experiments play upon ideas of scale and juxtaposition, echoing methods of representation explored in thesis research, while also unveiling a new lens to understand the phenomena of the absurd.