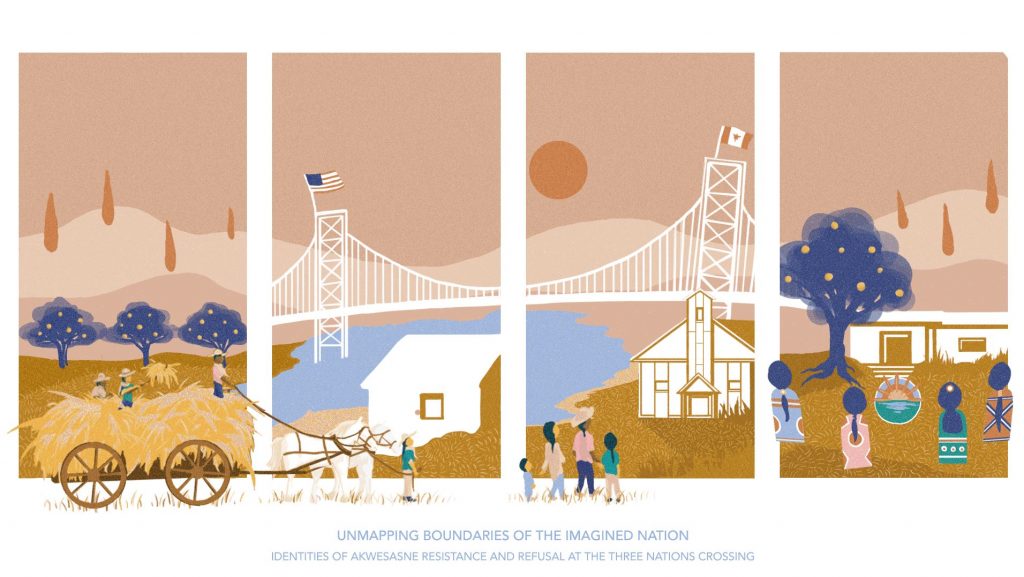 Unmapping Boundaries of the Imagined Nation: Identities of Akwesasne Resistance and Refusal at The Three Nations Crossing

Drawing on themes of nationalism, the geography of violence, and Indigenous resurgence, this project considers the implications of mapping boundaries of the imagined settler-colonial nation on concepts of national identity building in Canada. The denaturalization of colonial approaches to nation building and national legitimacy, which are characterized by border strength and control, has been at the centre of conversation regarding communities around the world that straddle, blur and erase political borders. The Mohawk community of Akwesasne, which straddles the Canada-U.S. and Ontario-Quebec borders becomes a site in which to study processes of “unmapping the white settler society,” a phrase termed by Sherene Razack, a professor of Women’s Studies at the University of California. Despite these ongoing conversations occurring in communities across the country, Canada is a nation which itself is rooted in an erasure of Indigenous territories and superimposition of settler-colonial boundaries. The role of border erasure and consolidation throughout Canada’s history therefore becomes one that is closely
tied to Canada’s identity building. The presence of Three Nations Crossing bridge at Akwesasne sparks a conversation surrounding the role of erasure, consolidation and overlay of imagined boundaries in building or erasing shared identity.