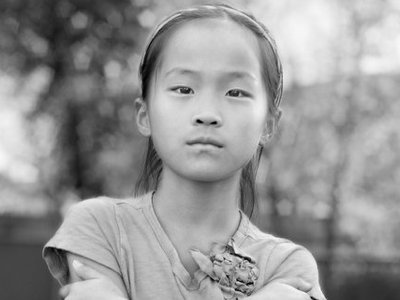 The show is on until Wednesday, January 15 at the Lightroom Gallery, room 234, Architecture Building, Carleton University. The gallery is open Monday to Friday, from 9 a.m. to 5 p.m.

Artist statement
The title of O Human Child is a line borrowed from the W.B. Yeats poem The Stolen Child, which is about the fairy tales we tell children to protect and shelter them from the tragedies of the world.

The impetus for this series of photographs came from a desire to better understand the place where I currently find myself, rural Saskatchewan. I turned to the writings of W.O. Mitchell in hopes that his words would help me gain a sense of the Saskatchewan identity.

In Who Has Seen the Wind Mitchell depicts life as a child in rural Saskatchewan in the 1930s. Through stories of everyday events of a young boy trying to make sense of life, death, and God, he addresses universal themes in his iconic Canadian prairie voice.

My goal in creating O Human Child is to take a contemporary look at children growing up in rural Saskatchewan and consider how the tensions and complexities of childhood today both contrast and mirror those of Mitchell’s time.

About Vera Saltzman
Born and raised in Cape Breton, Nova Scotia, photography has long been a “back burner” interest for Vera, but she didn’t become serious about it until she moved north to Nunavut. Struggling to fit in, she turned to her photography to build a bridge between herself and the Inuit, a friendship of sorts – a visual record of an intangible exchange.

After returning south, Vera studied full time at the School of the Photographic Arts: Ottawa (SPAO), completing their portfolio development program. Through her work, she focuses her attention on issues of identity and the development of a “sense of place,” the passage of time and the fragility of life. She currently lives in Fort Qu’Appelle, Saskatchewan.

Vera won the Silver Award in Saskatchewan’s Prairie Light Photography Festival in 2016 and Applied Arts Awards for her Sue and Winnie series and for an image from The Elevators. She was a runner up in the Creative Quarterly: Journal of Art and Design for her series Cry of the Lake Dwellers. Her work has been been published in several magazines including Ottawa Magazine, Black & White, Shots and Seites, and been featured on a number of online sites including The Atlantic and Lenscratch.

She is represented by Slate Fine Art Gallery in Regina, Saskatchewan.

The Azrieli School of Architecture + Urbanism gratefully acknowledges the School of the Photographic Arts: Ottawa  (SPAO) for the loan of the works. O Human Child was previously exhibited at the SPAO.