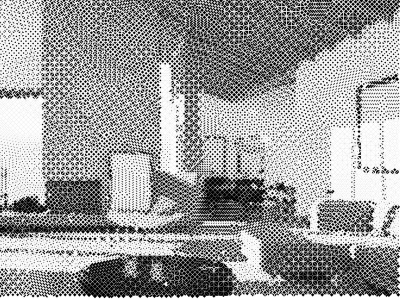 A new exhibition by Associate Professor Johan Voordouw opens January 9 at the Shenkman Arts Centre, 245 Centrum Boulevard, Ottawa. The show features a set of 24 architectural drawings that explore contemporary representations of Canadian domestic space and new ways of drawing architecture. The digital drawings will be on display until February 11. FREE ADMISSION.

Everyone is welcome to attend the opening reception on January 12, from 1 p.m. to 3 p.m.

New Image of Home examines how the home is represented in contemporary media. The drawings challenge the idea of the perfect, curated image of the home. In this domestic space, cups are left on the coffee table, toys under the television stand, and laptops and other devices are strewn around. All of these things are visible, but the method of drawing makes them fuzzy, hidden, ghostly.

The drawings represent domestic interiors in novel ways. They are embroidered, backlit, and drawn using dots instead of lines or rendered.

“I became interested in the home as represented in design magazines and sought to convey domestic space as an expression of daily life,” says Voordouw, 39. “As an architect, I am very interested in developing new modes of drawing architecture. In this set of images, I investigate the dot as the primary element of drawing. I argue that architectural representation is dominated by two modes of imaging making – the line – used in images such as sketches or technical drawings, and the render – used in either hand drawings through shading or in computer images such as digital visualizations.”

Dots have historical significance in art, such as pointillism and Pop Art, and media, through halftone images in newspapers and print magazines. They are, however, unexplored in architecture.

“What I like about the dot is that I can manipulate each one in the computer, vary its shape, or size to get a visible image from far away that dissolves as you step closer,” says Voordouw.

The images are a culmination of a two-year research project examining the spatial evolution of the Canadian single-family home and its material contents in photographic representations. The research studied 325 projects from 1956 to 2017.

About Johan Voordouw
Johan Voordouw is an associate professor at the Azrieli School of Architecture + Urbanism at Carleton University and a registered architect in the United Kingdom. He has taught and practiced in the UK, Canada, and the Netherlands. Johan’s work has been extensively published and exhibited, including the IABR 2014, Royal Academy Summer Show in London (2010 and 2011) and the Venice Biennale (2010). He completed graduate studies at the Bartlett School of Architecture in London, England, and his undergraduate studies at the University of Manitoba in Winnipeg. Johan’s research interests include digital design practice and its connection to architectural fabrication, theory, representation, and material craft.