Listening to Climate Change: Winner of a 2019 Canadian Architect Student Award of Excellence 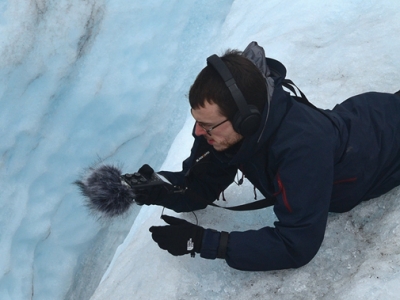 Josh Wallace has won a Canadian Architect Student Award of Excellence for his 2019 Master of Architecture thesis, Listening to Climate Change, which explores sounds made by the melting of the Athabasca Glacier.  “I was looking for ways to communicate the urgency of global warming,” says Wallace, who graduated from the Azrieli School of Architecture & Urbanism last May. His thesis advisor was Catherine Bonier.

Wallace traveled to the glacier in Jasper National Park, AB, and recorded the atonal and arhythmic sounds made by the glacier. “I could hear the melting,” he recalls. “It’s a lot of dripping. The sound of rivers flowing. A lot of waterfalls. I am used to navigating with my eyes. This was a way of engaging space with my ears. I found myself in places I wouldn’t have ended up at all if I hadn’t used hearing as my primary sense.”

His thesis asks: “How can climate change be woven into human imagination and memory through the medium of sound?” Wallace explores the question through the design and construction of imagined instruments or listening devices that are activated by forces of nature or human beings. For example, a Glacier Accordion, anchored into the Athabasca Glacier, yields sound from the wind and shifting ground plane and by humans tuning the membranes with cranks and pulleys. “Common human relationships with climate change are often conceptual and abstract, informed by popular media, buzz words, and large datasets that are incompatible with a human-scale of understanding,” Wallace writes. “Augmented interactions between humans and environmental phenomena may facilitate the development of a visceral knowledge of climatic realities.”

Wallace first combined his personal interest in music with architectural exploration at the scale of the landscape in the context of a Graduate Option Studio with Director Jill Stoner, in winter 2018.  That project mapped the boundaries of the Athabasca Glacier onto the urban fabric of Ottawa, using poles that “whistled” in the wind and were deliberately relocated as the glacier receded.  “Players engaging these new devices and landscapes must listen and adapt, letting go of accepted musical norms…” he writes, adding “this ‘letting go’ may aid the necessary philosophical and behavioural shift towards adapting to a new climate paradigm.”

Canadian Architect magazine announced the winners of its 2019 Awards of Excellence in December. The annual awards honour design excellence for projects in the design and construction phases, as well as final-year projects by Canadian architecture students. This year, the jury members were Rami Bebawi of KANVA, Joe Lobko of DTAH, and Cindy Wilson of LWPAC/Intelligent City.  “This project is about the engagement of senses, being in the moment, the awareness of place, and most importantly, giving voice to climate change,” said Lobko. “The imagery is seductive. I can’t wait to hear it.”

Before joining the MArch program at Carleton, Wallace earned a Bachelor of Environmental Design Studies at Dalhousie University. He is currently exploring job opportunities in the profession.