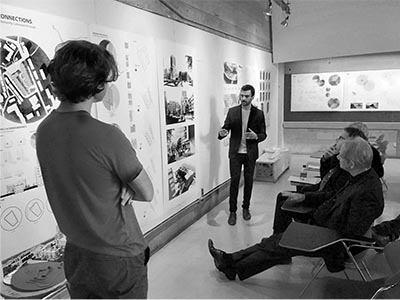 The Azrieli School of Architecture and Urbanism is excited to announce the establishment of the new Hobin Prize in Architecture & City Building, endowed by a generous gift from Hobin Architecture. Each year, the endowment will award several monetary prizes to students in the fourth-year undergraduate studio in recognition of excellent work.

Conceived by Professor Benjamin Gianni, this mandatory capstone studio focuses on housing. It brings together students from all three undergraduate majors – Design, Urbanism, and Conservation – to explore the redevelopment of relatively large sites within the city.

This new prize strengthens a deep and long-standing connection between Hobin Architecture and the school. “I’m really proud of our relationship with Carleton,” says Barry Hobin, founder of Ottawa-based Hobin Architecture, which has consistently hired talented Carleton graduates.

Hobin, who has participated deeply in the life of the school for decades, currently sits on the Azrieli Advisory Council, which oversees one of the school’s largest endowments. He was part of the architecture school’s second graduating class, and three of his partners, Wendy Brawley, Sandy Davis, and Gord Lorimer, are also alumni.

The focus of the fourth-year undergraduate studio is community building and the creation of urban fabric. Since 2015, the studio has received sponsorships from local developers, who join architects, city staff, and community members in spirited discussions around the student work. Beyond the exceptional pedagogical experience it provides for students, it facilitates a broader engagement between the school, the professional community, and the city at large. Hobin Architecture, together with the Trinity Group, has sponsored two of these studios in recent years.

“I think it’s unusual for a school,” says Hobin, about the studio’s focus and approach. “It’s engagement with the notion of the role of an architect as part of our culture. Affordability, unusual housing typology, community engagement. How do you create interesting cities? These are the themes of our times. It means you have to have a lens that is bigger than your client requirements.”

The prize will continue to affirm and emphasize the importance of city building as a crucial dimension in architectural education. The first awards will be given in January 2020.