Winners of the 2022 Hobin Prize in Architecture & City Building

The prize recognizes excellence in the fourth-year undergraduate housing and city-building studio at the Azrieli School of Architecture & Urbanism.

“A hundred years ago, 80 percent of the population lived outside cities, and 20 percent lived inside cities,” said Hobin. “Today, it’s the flip of that. Cities and city pieces of land are really important and under tremendous change.”

The awards ceremony took place on March 2 in the PIT at the Architecture Building and was also live streamed on Facebook. In total, $4,000 in prize money was distributed to the winners.

See the winning projects below.

The studio explored the redevelopment of:

• Somerset St. (between the Plant Recreation Centre and the O-Train tracks,) with support from the City of Ottawa;

• The former bus station site on Catherine St., with sponsorship from Brigil;

• The corner of Innes and de Lamarche Roads in Orleans, in partnership with Groupe Lépine.

“In all those sites, there are common themes that are shaped by context,” said Hobin. “Certainly, one of them is green space and open space and how we create urban public realm spaces. The other big thing is mass and typology and how to actually create the most livable environments. Increasingly we’re being asked to live in denser and denser situations.”

“Most of these projects were done by teams,” observed Lorimer. “That’s a remarkable thing. That’s a skill that you’re learning right now about how to work with other people. Everything that’s good, in the way of the design world, is a team effort. The notion that one person designs it all is wrong.”

Each year fourth-year students in Carleton’s Bachelor of Architectural Studies program undertake a major housing and city-building project. Operating under the rubric of intensification, students produce proposals for multi-unit housing on sites that are likely to redevelop in the near future.

Among other things, this involves understanding what zoning will permit, what the marketplace will support, and what the community might envision. Ranging from 40 to 400 units, projects must accommodate a mix of housing types and residents, complemented by uses such as street-oriented retail.

In addition to orchestrating the tight boundaries between the public and private realms, students must consider how their projects contribute to character and integrity of the street and the surrounding neighborhood.

Interim Director Federica Goffi congratulated all the students for their entries. “It’s wonderful to see what you were able to accomplish, all the more considering that in the fall, we were still primarily online, so you’d be working with partners but also in isolation from each other.” 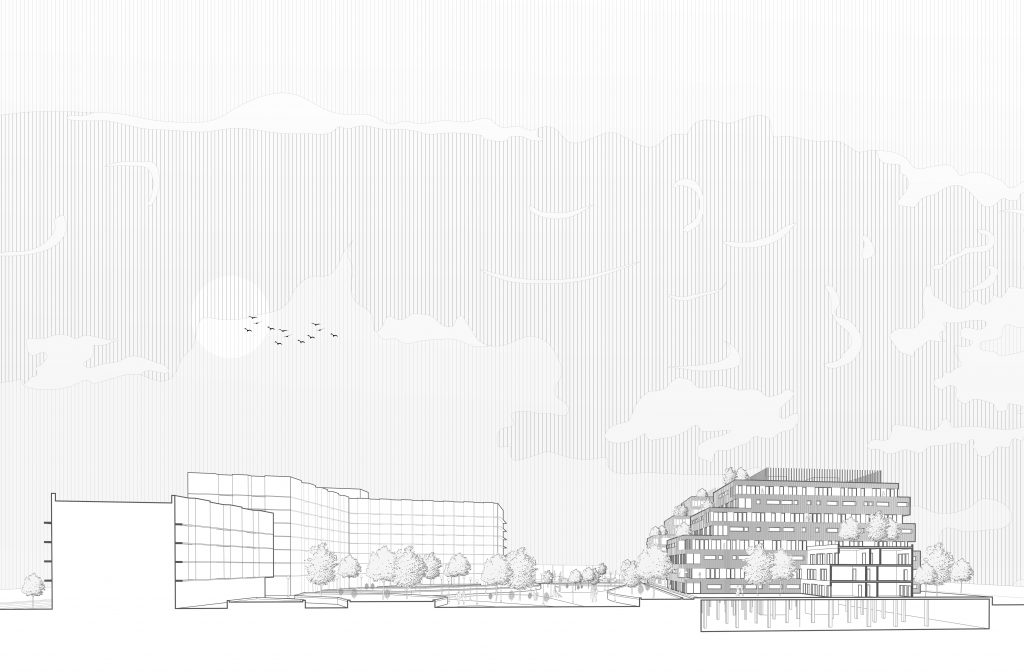 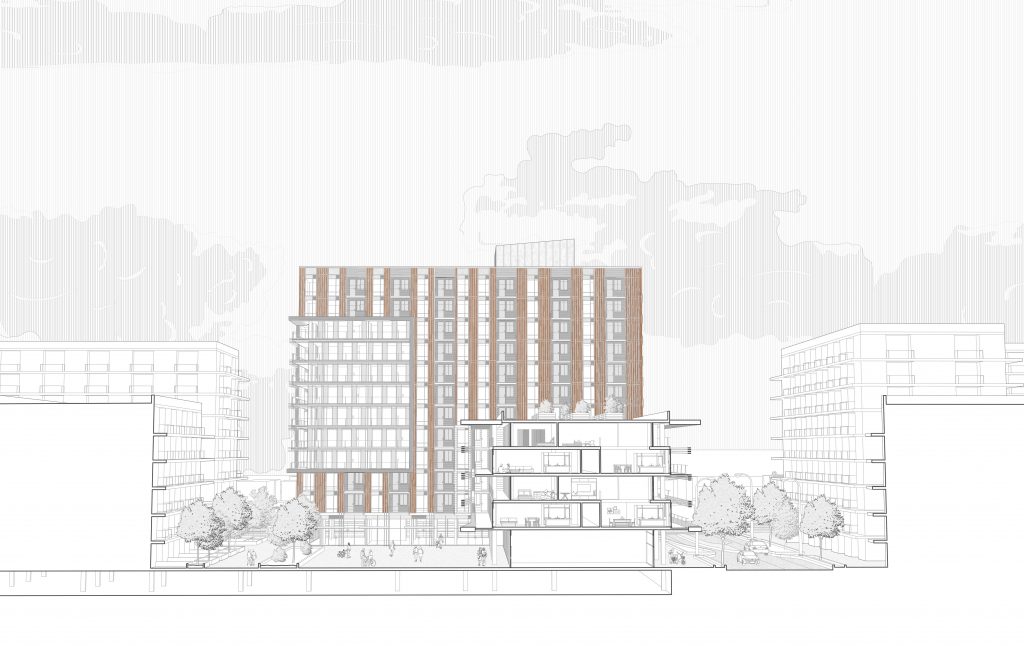 Traverse proposes a “fabric of landscape” in the quickly urbanizing east urban community of Orleans. With significant densification anticipated over the coming decade, Traverse fosters a vibrant, mixed-use community with adaptable residential units, service-oriented retail, and remote-working solutions. Simultaneously, as Orleans becomes progressively urbanized, the project strives to respect the suburban context by allocating generous green spaces, such as the municipal park and community gardens. Traverse is designed to support a diverse range of demographics, including young professionals, families, and individuals aging-in-place. Accordingly, Traverse offered a wide range of housing typologies and public amenities to support the unique socio-spatial needs of each resident.

Jury Comments: This was the most complete presentation that we saw and communicated well in terms of diagrams, the site plan, and the renderings. It’s extremely well presented. It’s the kind of project that would be easy to develop. The site planning was strong — even the way it integrated the park area, bridging over the street to maintain car access. It explored two different building forms. The low-rise with three blocks stepping was interesting. The higher building form is quite massive, but it’s broken down in massing. (An architect) could take that scheme into any boardroom and present it. It’s well resolved. A very accomplished scheme and fully worthy of the first prize. 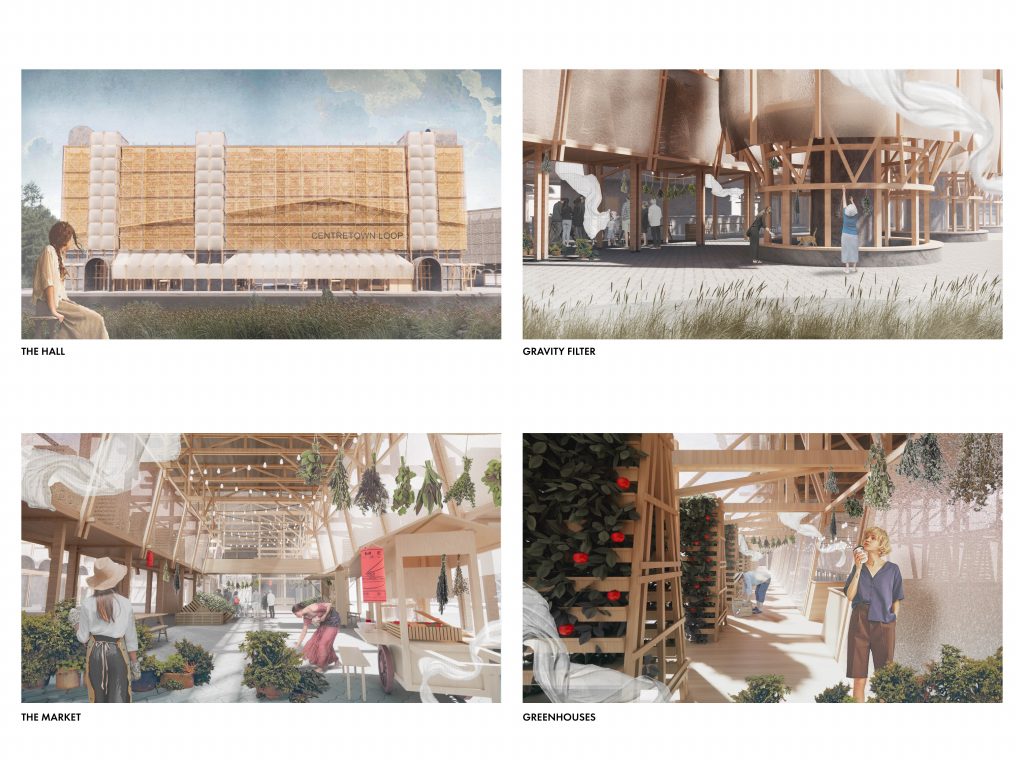 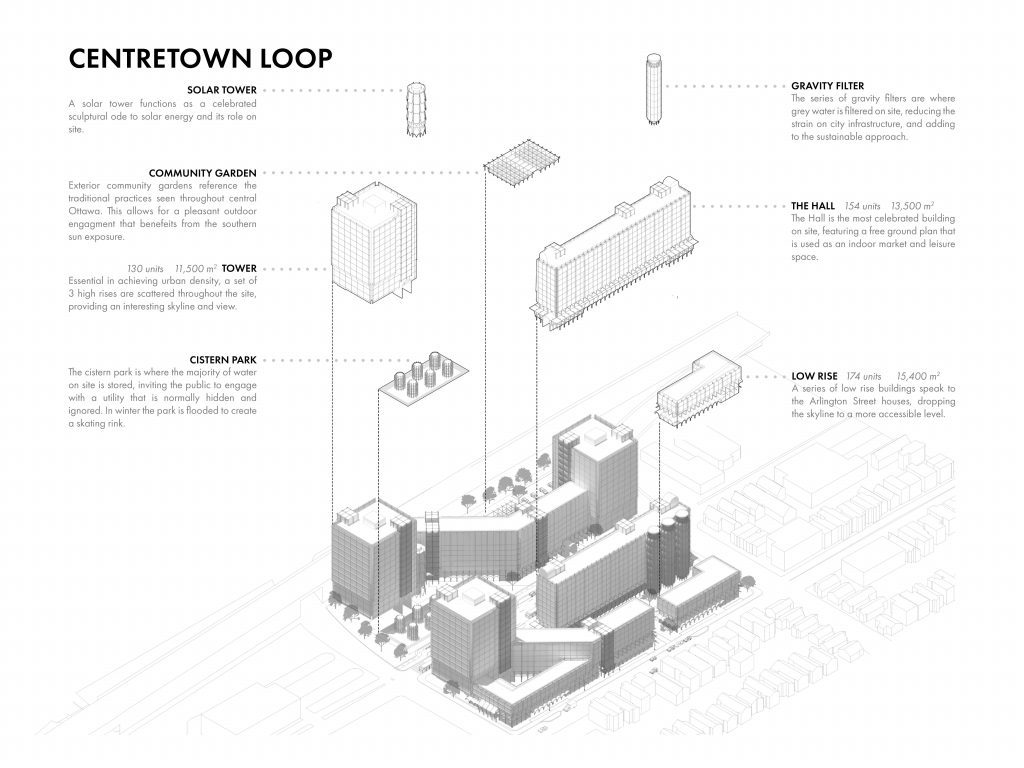 Centretown Loop seeks to be a precedent for progressive urban community living. Reconnecting urban residents with their environment while celebrating the infrastructure that supports them forms the project’s mission. Inspired by the network of community gardens throughout central Ottawa, much of the site is devoted to greenhouse space to bring local fresh produce to residents and the neighbourhood. Tenants can use garden space for their kitchens or sell their yields at the onsite market. Water is stored and filtered onsite through a series of cisterns and gravity filters. Energy is supplied from solar augmented mesh facades and roof arrays to offset the site’s demand.

Jury Comments: The jury selected this project because of its innovation and considered it an ideas project. We appreciated the integration of the urban farming component, the on-site water management, and the building tectonics of the site. It was beautifully rendered, with great graphics, and conceptually interesting and enlightening. This was the only scheme that tackled wood frame construction. They set up some challenges, such as how you collect and filter the greywater, and from the challenges they made architecture. That was impressive. The architecture is informed by sustainable design principles. 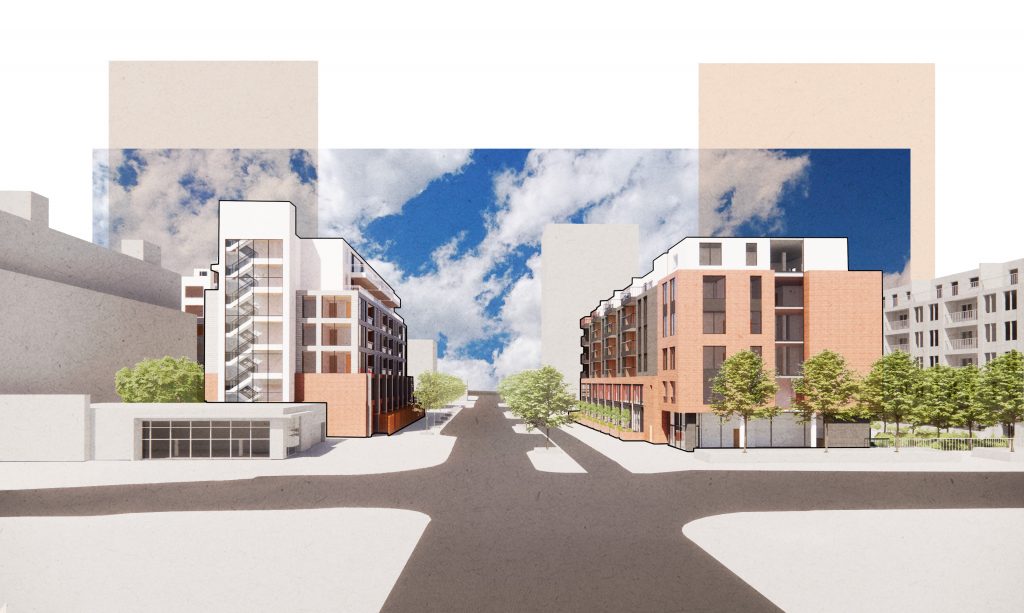 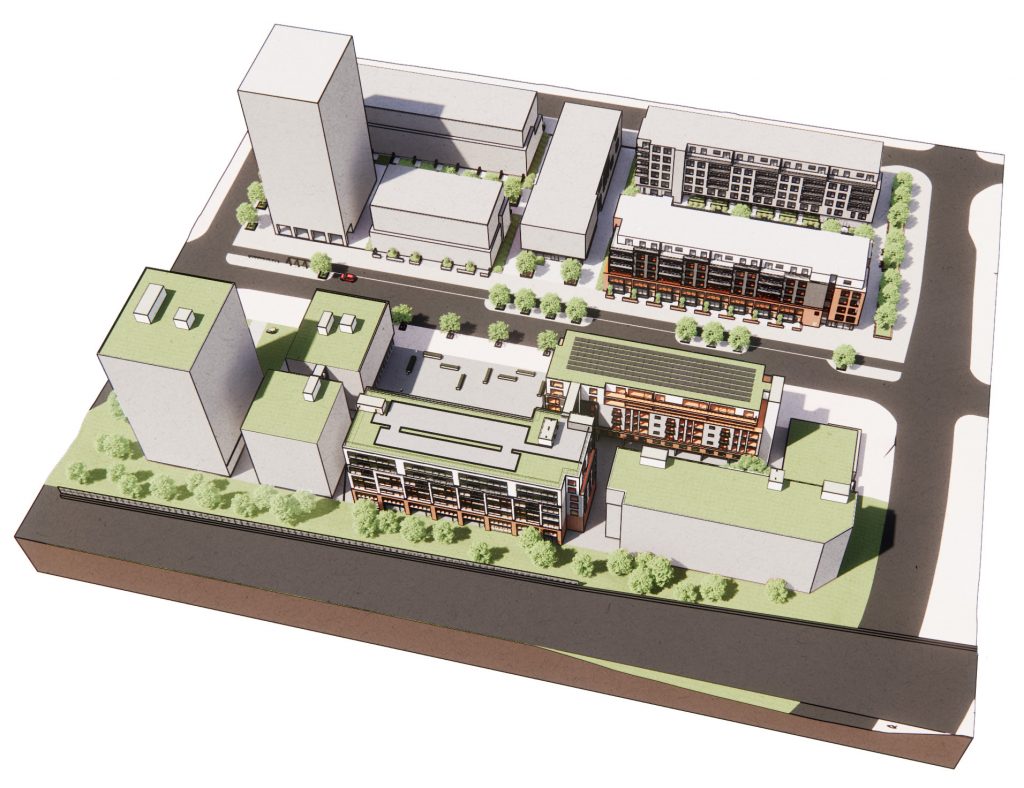 Located just north of the Queensway Highway between Kent and Lyon Streets, the site of the former Greyhound bus station is a challenging yet exciting site to propose a new housing typology to Ottawa. Haven Housing is a project centred around the use of plazas and courtyards, which offer pleasant outdoor space for residents while protecting them from the noise and traffic of the Queensway Highway. To the north, quiet family-oriented units take advantage of the neighbouring elementary school to draw families into the city. To the south, a mix of typologies creates a menagerie of public and private spaces which invite residents to mingle.

Jury Comments: This project had great renderings and a really nice scale and sense of detail. The architecture was believable and well developed. The master plan is well developed. It converted Catherine to a complete street with a bike path. It has nice low-rise and mid-rise buildings. It’s an interesting low-profile scheme, well-executed. It’s an anti-current-development project. It doesn’t have as much green space, but it’s meaningful. 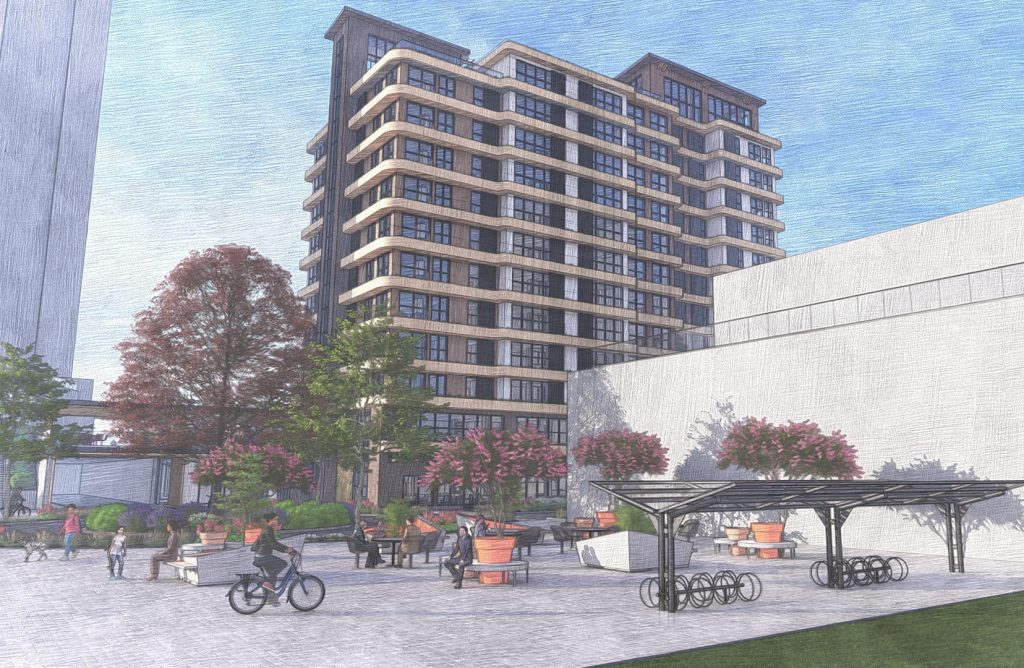 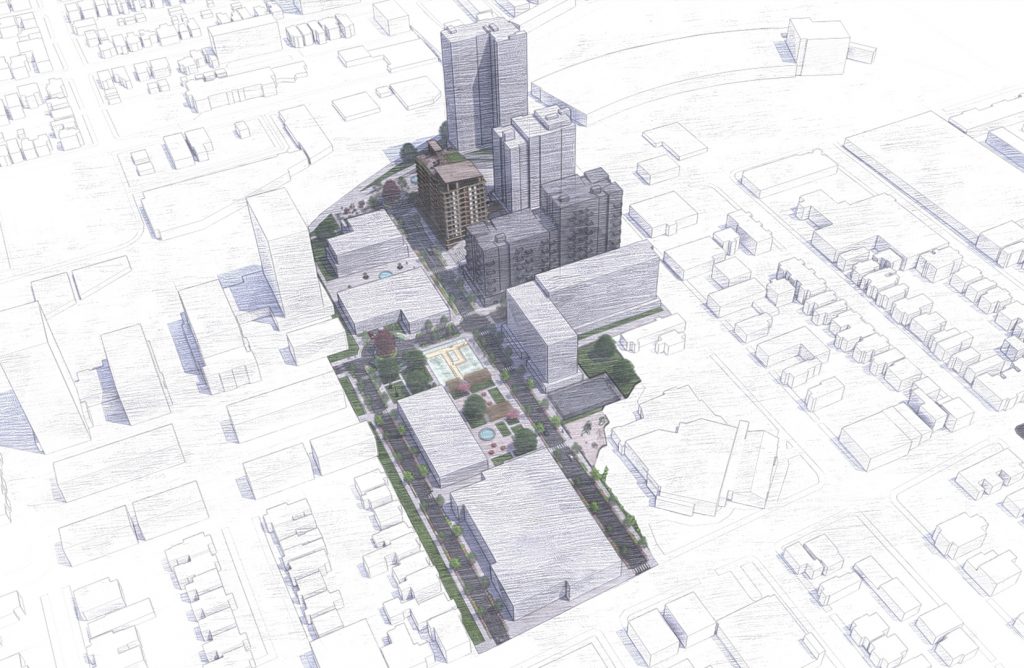 Framework Junction proposed the establishment of a community where people could be surrounded and embraced by art and culture. The primary goal was a pivotal node that would attract new demographics into this area of Ottawa. Residence Building B, titled Interface, is intended to fuse the realm of the podium level adjacent to Somerset St. West and the arts and cultural realm on the new boulevard at grade. The units were designed with inclusivity, visit-ability, and adaptability in mind to accommodate families and be a viable option as residents inevitably age and have new requirements.

Jury Comments: This was an incredible solo effort. It is graphically good and content-wise fairly complete. There’s a good amount of work. We commend her on the details and floor plans that were developed. It’s a really nice idea addressing not just the physical context but also the social and cultural context.