Frank Carter, the Thumbnail Sketch, and the Joy of Architecture

The passing of Frank Carter is an occasion to look back at a cherished faculty member, as well as the history of our school. On Saturday, February 12, friends and family gathered in Metcalfe, Ontario, to say goodbye to a dear friend: Frank Carter, who passed away on January 22, 2022. After the service, all were invited to the farmhouse where Frank and his partner Norma had lived for nine years before moving to a retirement home in June 2021. The late afternoon sun shone over the fields into the farmhouse catching the corner of the dining table generously laid with homemade dishes, highlighting a moment of simple and quiet togetherness of which Frank would have approved.

Frank Carter was one of the first professors hired to staff the newly established school of architecture in Ottawa, Canada, in 1973. He became Assistant Professor the following year and held the position of Associate Professor from 1984 until his retirement in 1997. Frank is remembered with fondness by generations of students and faculty members at Carleton University who valued his teaching in studio and design-related courses. These include a course titled “The Fundamentals of Architectural Vocabulary,” in which Frank introduced students to his favorite buildings – such as Mario Botta’s House at Riva San Vitale and Charles Moore’s house at Orinda, California — works that are uniquely and deeply rooted to their sites. 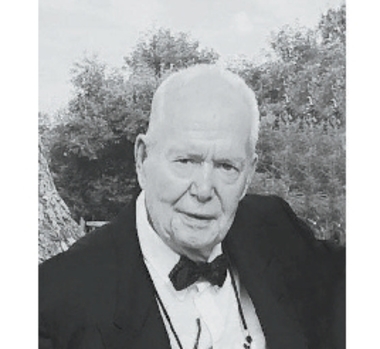 Born in Montreal in 1940, Frank and his twin brother Stewart spent their early years in that city with an older brother and their parents before moving to Toronto, the city of his youth. Frank studied architecture at the University of Toronto, and upon graduating, he was hired by one of his professors, the Australian modernist architect John Andrews. Frank would thus work on some of the most fascinating projects of the day, including the structuralist design at Scarborough College. Andrews encouraged Frank to complete a masters’ degree at Harvard GSD and even financed those further studies. To complete the circle, Frank invited Andrews to lecture in our PIT in the late 1970s, proudly introducing him to the school.

Frank was passionate about architecture and teaching. As coordinator of second and third-year studios for many years, Frank nurtured a love of design and architecture at our school. A lucid designer who enjoyed working through a project’s embryonic moments, Frank was a wonderful early-design teacher. What is more, Frank valued the human dweller and emphasized spaces of welcome and gathering in every project he assigned or reviewed. That an elevating space for human encounters mattered so much to Frank speaks volumes about who he was. Meeting Frank in Ron Thom’s office changed the life of Toronto architect Ian MacDonald. (Frank had joined the office during a sabbatical year in 1976 to work on a competition). MacDonald followed Frank back to Carleton University to complete his Bachelor of Architecture after three years at the University of Waterloo. MacDonald reflects: “Frank had adopted a rough, crusty exterior to protect the soft kind inner core of his being. His kindness and inclination to help others were real. This is the central character of Frank that I loved so much. He was thoughtful and cared deeply about making spaces for people.”

In both his professional and personal life, Frank’s often devoted his travel to seeking out the immediate experience of buildings. For example, he guided a Directed Studies Abroad (DSA) studio to Rome in the Fall Term of 1985 and another to Los Angeles in the early 1990s. Students fitted up various cars and trucks with sleeping and camping facilities and drove to California in a make-shift caravan. 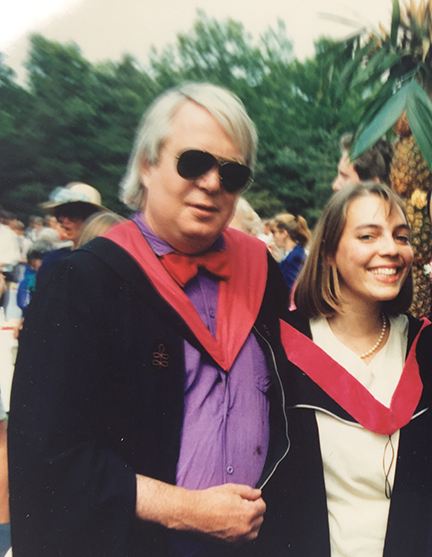 Heather Cameron (BArch 1987) was Frank’s student Teaching Assistant for DSA Rome and would become his second-year teaching colleague at Carleton from 1992 to 1996. Heather and Frank took students on several trips to the Eastern United States and arranged for access to numerous projects by Frank Lloyd Wright and Louis Kahn. Looking back to this time, Heather recalls that they lost and found a student along the itinerary. “Long sessions of driving were key to these road trips and what Frank liked to do best: drive anywhere and for any reason. I and many of the students will never forget these fantastic journeys.” Frank’s last architecture trip occurred recently when his former student Rita Komendant invited Frank to accompany her to Fogo Island, Newfoundland, a place Frank had long dreamt of visiting. The life-long friends were able to take in the exceptional architecture of Fogo Island Inn and to view the artist studios from a distance in the landscape. Norma was very grateful to Rita for making it possible for Frank to enjoy one more architecture trip in his last days.

Frank was many people’s doorway into our school. This was the case for outgoing Director Jill Stoner. Frank had brought a group of Carleton students to the New Jersey Institute of Technology (NJIT) when Jill was teaching there in the fall of 1986. They collaborated on a one-week charrette tied to the 100th anniversary of Mies Van der Rohe’s birth. Frank subsequently invited Jill to final reviews at Carleton in December of 1986. Jill recalls this visit fondly. “When I first visited Carleton for Frank’s studio review in the winter of 1986, when temperatures were well below zero, he met me on the tarmac coatless, in shirtsleeves. The work of his students was more bold and conceptual than any I had seen in the US. My first and lasting impression: an inspired teacher and intrepid Canadian.” Jill remained close to Frank during her years as Director, involving him in planning the school’s 50th-anniversary celebrations.

In 1977, Frank was also first to welcome a newly hired professor, Croatian Montrealer Tom Dubicanac, who would become his friend and long-time colleague. “Frank was the first person I ran into when I arrived at the school. I don’t think I would have made it in Ottawa without him. He was the brother I never had, a pivotal human being in my life.” During a time of need, Frank offered living and studio space to Tom in his Gleneagle home: “I painted many paintings in his basement; he stored them for many years.” Dubicanac also recalls Frank’s role as a mediator in the faculty, saying “he was like a human instrument, a pied piper; he didn’t polarize.” Tom admired how Frank “would take a pencil and draw in a calm, peaceful, non-aggressive manner.” Reflectively, Tom adds, “I wished I had that. I wish I had his human qualities.”

Upon learning of Frank’s passing, former Director Alberto Pérez Gómez (1982-1985) wrote, “He was truly a wonderful person, always positive, helpful, and with a smile on his face. Students loved him. He made my difficult task as Director, back in the days, much lighter, often coming to my office to ask how I was doing, trying to put things in perspective for someone like me, just arrived at Carleton, young and ignorant of the political tensions, always doing his best to mediate and mitigate conflicts.”

In their eulogy, Frank’s children Marney and Cresswell emphasized the place of our school in their father’s life. “Visiting Dad was exciting because we got to explore his homes in the Gatineau, in Hull, in Ottawa, and to see his office at the university. Driving over to the university was consistently a part of our Ottawa visits, so he could drop something off or check how the students were doing with their models and projects. In retrospect, we are quite thankful to have seen Dad in his element, working with students in the studio and running into colleagues and past students all over Ottawa. Whenever we crossed paths with such friends or students — which was quite often — they took the time to say a real hello and have a genuine exchange, it was never a superficial greeting.” 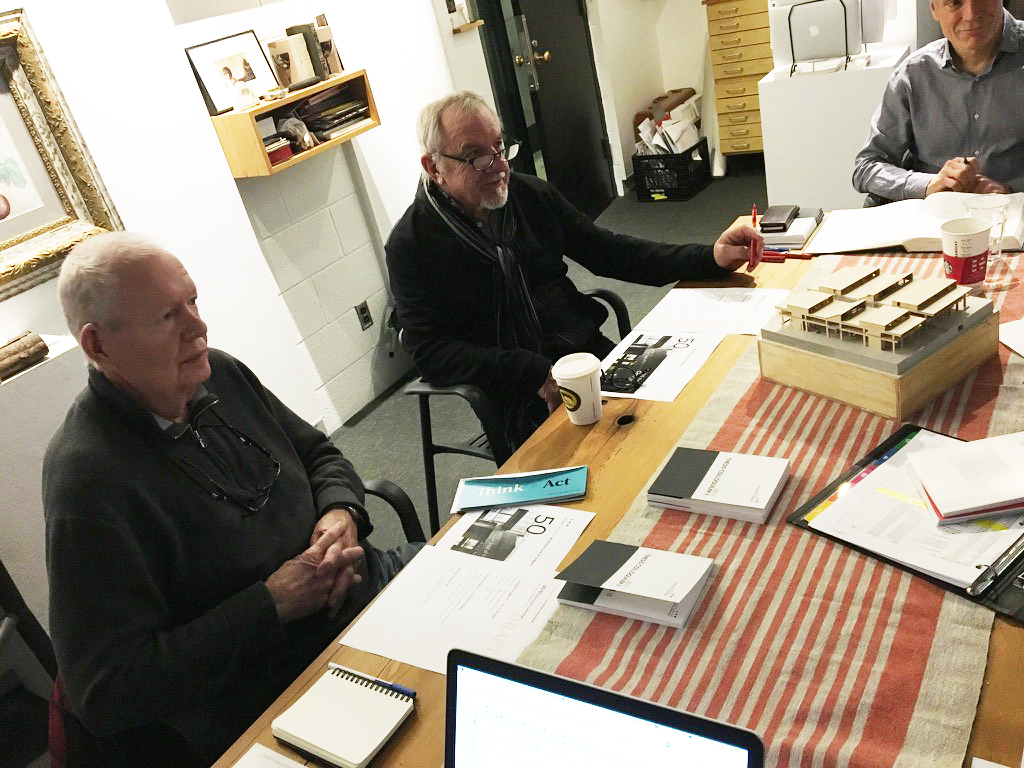 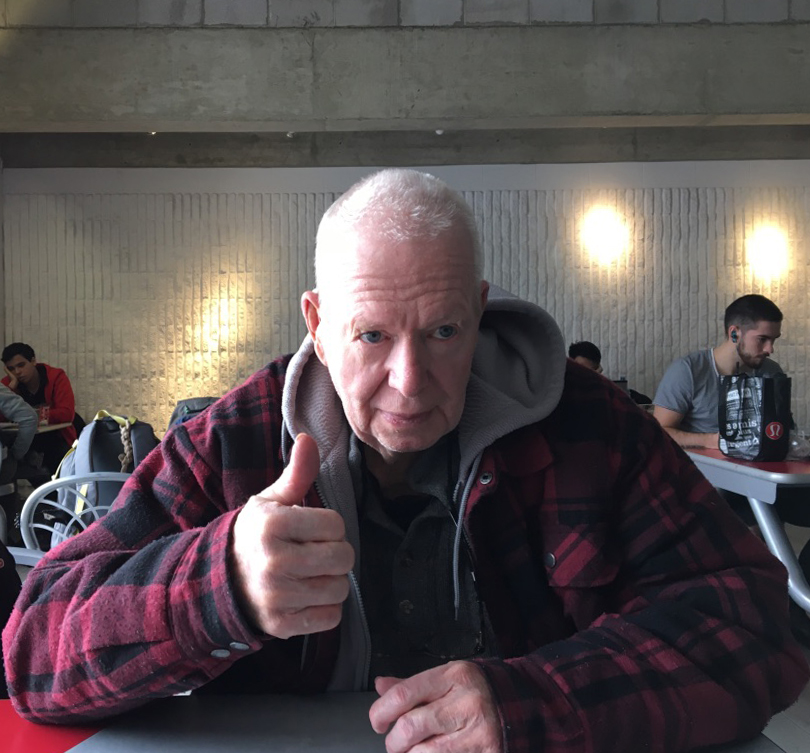 Recently retired professor Lucie Fontein offered these words: “Frank was always very good to me. We taught studio together for a number of years and always got along. I really appreciated the clarity of his design thinking.” Recently retired professor Yvan Cazabon expressed his gratitude to Frank in this way: “I will truly miss his candour and skewed sense of humour. We often said that he wore his name well, for he was truly “frank and earnest.”

Frank, my own former teacher, became a central figure in my life at Carleton when I joined the faculty in 2001. Generations of students will likely recall Frank’s appearances at studio reviews in the studios I taught. I regularly invited Frank for crits, knowing that he would bring seasoned experience to the young design students. He seemed to derive sincere happiness from sitting among them, engaging in their projects, feeling at home in a conversation about ideas across generations. Through the graphite markings that flowed from his oversized red lead-holder atop carefully torn and neatly layered sheets of tracing paper, Frank consistently helped them find greater clarity. He did not visit as often in recent years, but I would occasionally see him attending an early morning exercise class at the Carleton pool (before COVID). Wearing yellow crocs and bright trunks, he always waved from the pool deck. Frank advocated the practice of drawing a thumbnail sketch at the end of each design day, for through this small humble drawing, one returns to the first idea. With Frank vividly in my memory and heart, I shall continue to repeat this wise lesson to my students for as long as I teach.

Frank’s passage at the Carleton School of Architecture, now named Azrieli School of Architecture & Urbanism, has marked the lives of many. I return to the words of Tom Dubicanac once again here: “For me, there is only heaven for Frank. I keep Frank very high in my life book. He was a good man.”