The Azrieli School of Architecture & Urbanism is pleased to announce a new scholarship for a student enrolled in the Bachelor of Architectural Studies program in Conservation and Sustainability.

The Gouhar Shemdin Award in Built Heritage Conservation recognizes design excellence and innovative approaches to sustainability for the conservation, safeguarding, and reuse of built heritage.

The $1,000 annual award will go to an outstanding student in the fourth and final year of the Conservation and Sustainability program. The inaugural award will be presented in June 2022.

A second annual award of $1,000 will go to a student enrolled in the Bachelor of Engineering program in Architectural Conservation and Sustainability.

The award was established in 2021 by Gouhar Shemdin, an Ottawa-based conservation architect with more than two decades in the federal civil service, and later as a heritage consultant internationally

“Having had great professional and friendly cooperation over the years with the conservation programs of architecture and engineering, I thought of establishing this award,” says Shemdin.

“I hope to continue motivating young professionals to enter this field that we are passionate about, to protect our architectural heritage and prevent wasteful destruction that is not sustainable.” 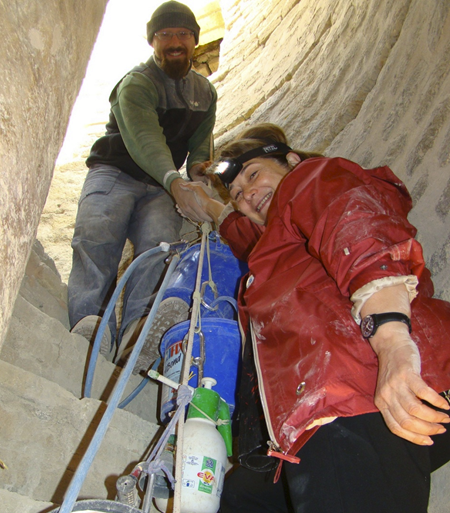 Both scholarships will be awarded on the recommendation of the Dean of the Faculty of Engineering and Design.

Since 2009, the Azrieli School of Architecture & Urbanism has offered the only Canadian undergraduate level specialization in architectural conservation and sustainability.

“The Gouhar Shemdin Award is a recognition of the hard work and creativity by conservation students in looking for sustainable solutions to the built environment,” says Associate Professor Mariana Esponda, the program coordinator.

“One of the key elements in most of the conservation studios is the integration of the local community,” says Dr. Esponda. “So far, we have repurposed or conserved more than 25 heritage buildings in Ottawa and the surrounding area.

“We have trained young generations on how to apply a set of values associated with the place and to reinterpret the history, the main features, and the cultural meaning of an existing building for sustainable uses to the community,” she adds.

For the past decade, the school has worked with the ICOMOS Canada Martin Weaver Memorial Fund. Mrs. Shemdin is the founder and chair. Dr. Esponda and Professor Mario Santana-Quintero sit on the board.

In 2013, the Martin Weaver Memorial Fund through ICOMOS Canada funded one of the most successful events. It saw 60 multidisciplinary students imagine Victoria Island in Ottawa as a celebratory space, reconciling the heritage significance of the site and identity.

Having decided on her field, she enrolled in the International Center for Conservation in Rome (ICCROM), where she obtained her Diploma in Architectural Conservation in 1970.

Mrs. Shemdin moved to Canada in 1972 and was employed by the federal government in the Restoration Services Division. That summer, restoration employees were sent to Cornell University in Ithaca, NY for a course in Preservation Planning. After three decades of working on historic sites in various government departments, she retired in 1995. After returning for five years, she retired again in 2005.

She also took part in the review of Parks Canada policy and in training civil servants to implement it. She enjoyed working on the intervention reviews with the Federal Heritage Building Review Bureau (FHBRO).

In addition, she was a contributor to the 1983 Appleton Charter for the Protection and Enhancement of the Built Environment, published by the Canadian chapter of the International Council on Monuments and Sites (ICOMOS-Canada).

During the 2000s, Mrs. Shemdin focused on international work and participated in training Iraqi professionals in Jordan with UNESCO, WMF, GCI, and ICCROM.