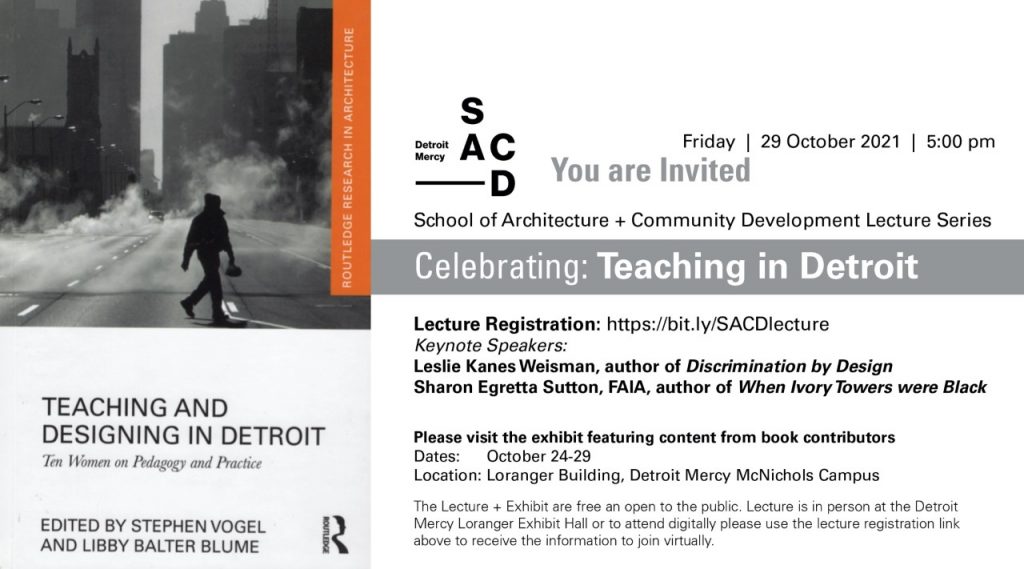 A free online lecture on Friday, October 29, focuses on a book, Teaching and Designing in Detroit: Ten Women on Pedagogy and Practice, whose contributors include Associate Professor Janine Debanné.

The book, published in 2019, contains essays by 10 women, including Debanné, who were instrumental in changing the culture of the Detroit Mercy School of Architecture + Community Development (SACD.) It is about teaching in Detroit, activism and feminism.

Leslie Kanes Weisman, author of Discrimination by Design, and Sharon Egretta Sutton, author of When Ivory Towers were Black, will be the keynote speakers. Many of the authors will also be present for a panel discussion after the speakers.

“This was the adventure of my life,” says Debanné, who taught at the University of Detroit Mercy and researched Mies van der Rohe’s Lafayette Park as a participant-observer over the course of six years in the 1990s.

She describes the keynote speakers as “inspiring activist educators.”

Leslie Weisman was the only female architecture professor at the University of Detroit Mercy in the 1970s and one of the founders of the Women’s School of Planning and Architecture. Sharon Sutton is the 12th  African-American woman to be licensed to practice architecture and the first to be promoted to full professor of architecture.

In 1993, when Stephen Vogel became Dean of the University of Detroit Mercy School of Architecture, women comprised about 20 percent of the student body. There were no full-time and few part-time women faculty members. He hired several women, including Debanné in her early years of teaching.

In Chapter 9, titled Detroit, My Teacher, Debanné recounts the “hidden curriculum” she discovered and pursued in Detroit. Although describing a city in disrepair, the chapter reflects on empathic urbanism, civic memory, and bricolage renovation, as well as architecture’s potential to activate urban life and relationships.

Debanné also contributed the book cover photograph, taken in 1996 on a winter’s day on Woodward Avenue in Detroit, with her Pentax K1000.

This book provides a compelling and insightful portrait of ten female architects, artists, and designers who explored unique approaches to teaching, practice, and research in the post-industrial city of Detroit. These women explored the phenomenon of a new “ecological urbanism” through their own work in art, architecture, design, planning, landscape architecture, and installation as well as the work of their students.

Teaching and Designing in Detroit provides an 18-year snapshot of this work, how it affected the women’s practice, how they influenced student relationships to design and community development, and how their visions are now being carried out in Detroit. This book is organized into sections that group stories according to their focus on practice, pedagogy, and community engagement.

Included in the book is a foreword by Leslie Kanes Weisman, the only female architecture professor at the University of Detroit Mercy in the 1970s, and an afterword by Sharon Egretta Sutton reflecting on how working and practicing in Detroit foreshadowed the future vision now being carried out in the rebounding city of Detroit.

An intriguing read for students and professionals, this book will illustrate how these lessons learned can be applied by universities and communities in other post-industrial cities.