2021 Stantec Architecture Prize for Excellence in the Comprehensive Studio Project

Nine graduate students have received awards in the 2021 Stantec Architecture Prize for Excellence in the Comprehensive Studio Project event.

“There were some fantastic drawings and renderings,” said Stantec Principal Deanna Brown during the awards ceremony on February 5. “We do appreciate that you’re all working in a very strange year not having regular access to a studio and live access to your studio mates.”

Recipients are selected based on excellence in their project in the graduate Gateway Studio.

The project brief called for an urban forestry workshop in Gatineau, QC, on the site of a former paper factory along the Ottawa River. The building’s activities include the cultivation of trees, research and development, public awareness, and support for stakeholder groups. 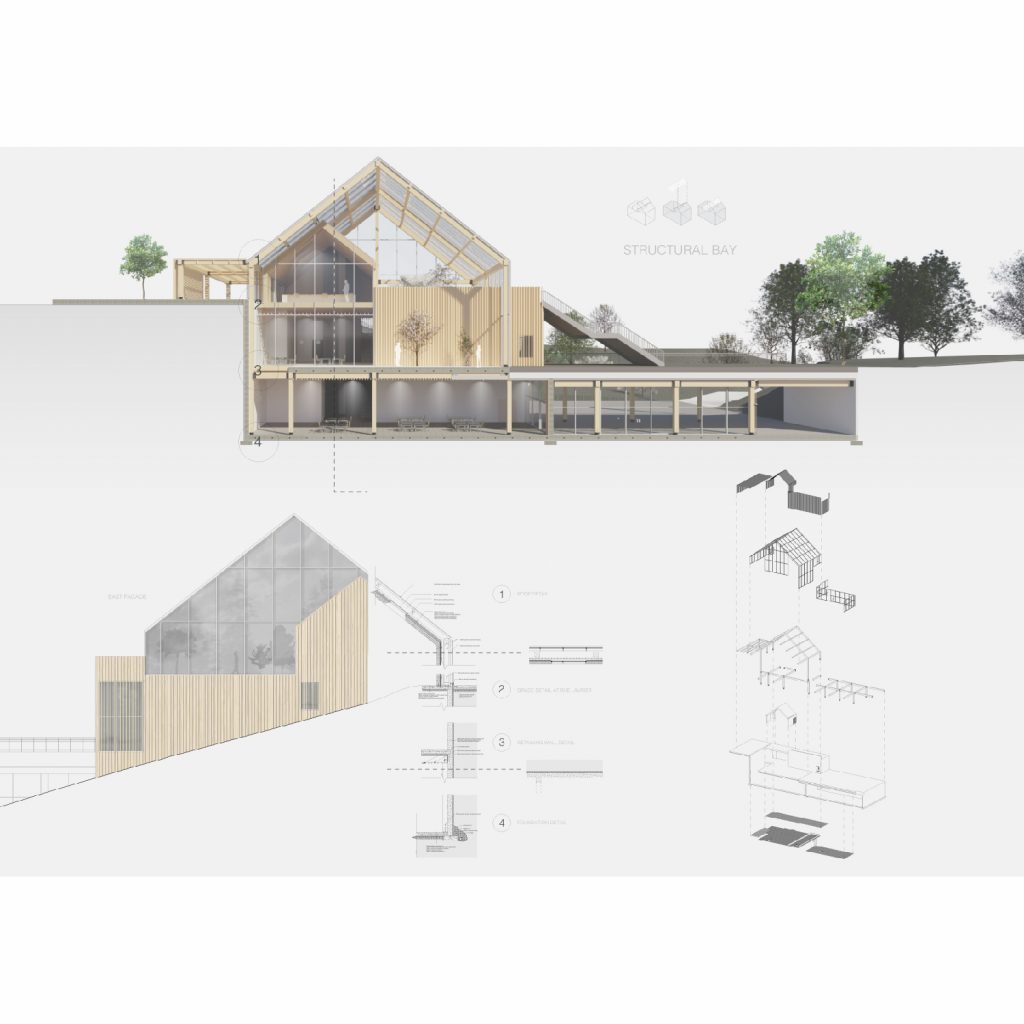 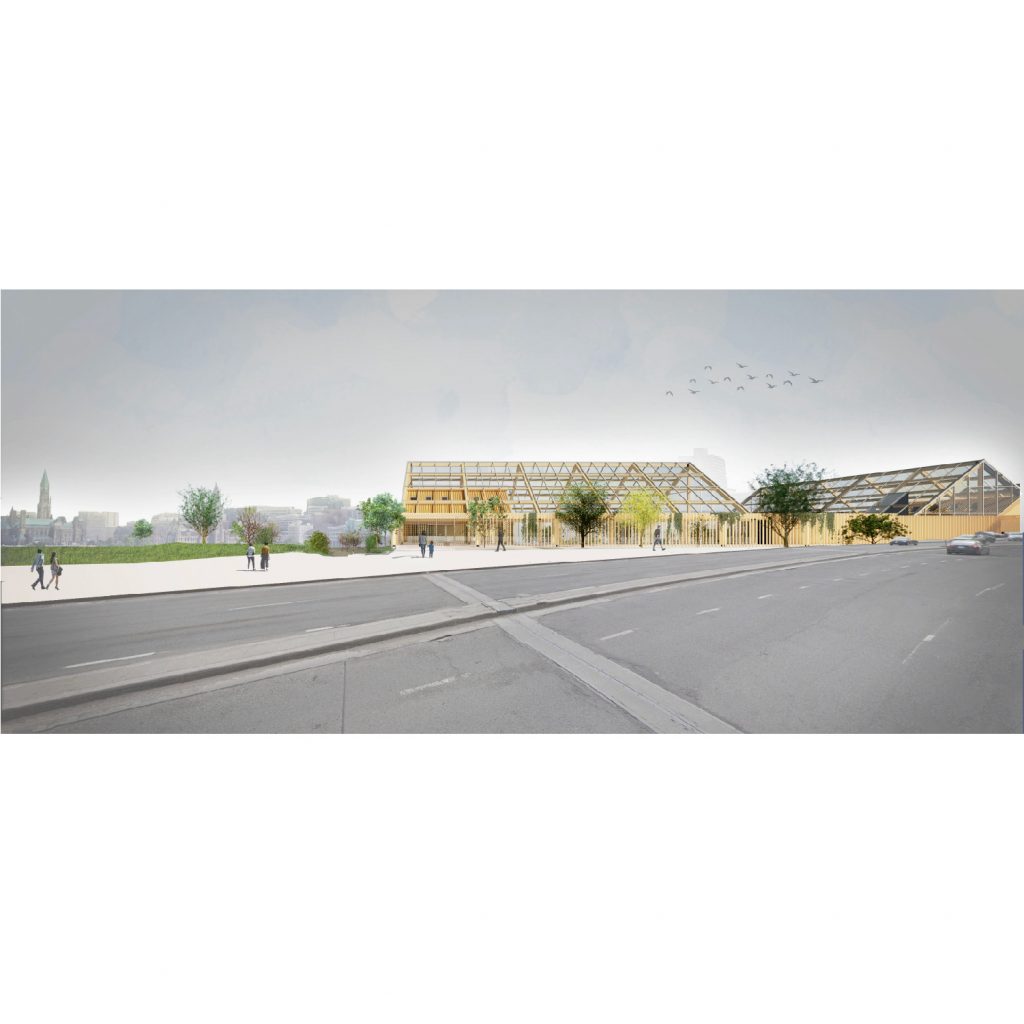 The concept for this urban forestry centre is to encompass a solid box of the program within a larger, lighter, and transparent one. The greenhouses on site act as beacons of light and education. They extrude out of the landscape and through the trees as reminders of the importance of urban forestry.

Jury Comment: We appreciated the use of a traditional vernacular in a new way and how the project connected the street to the landscape without going through the building. There are compelling and interesting relationships between the forms. The use of wood gives you a hint there’s something different going on. 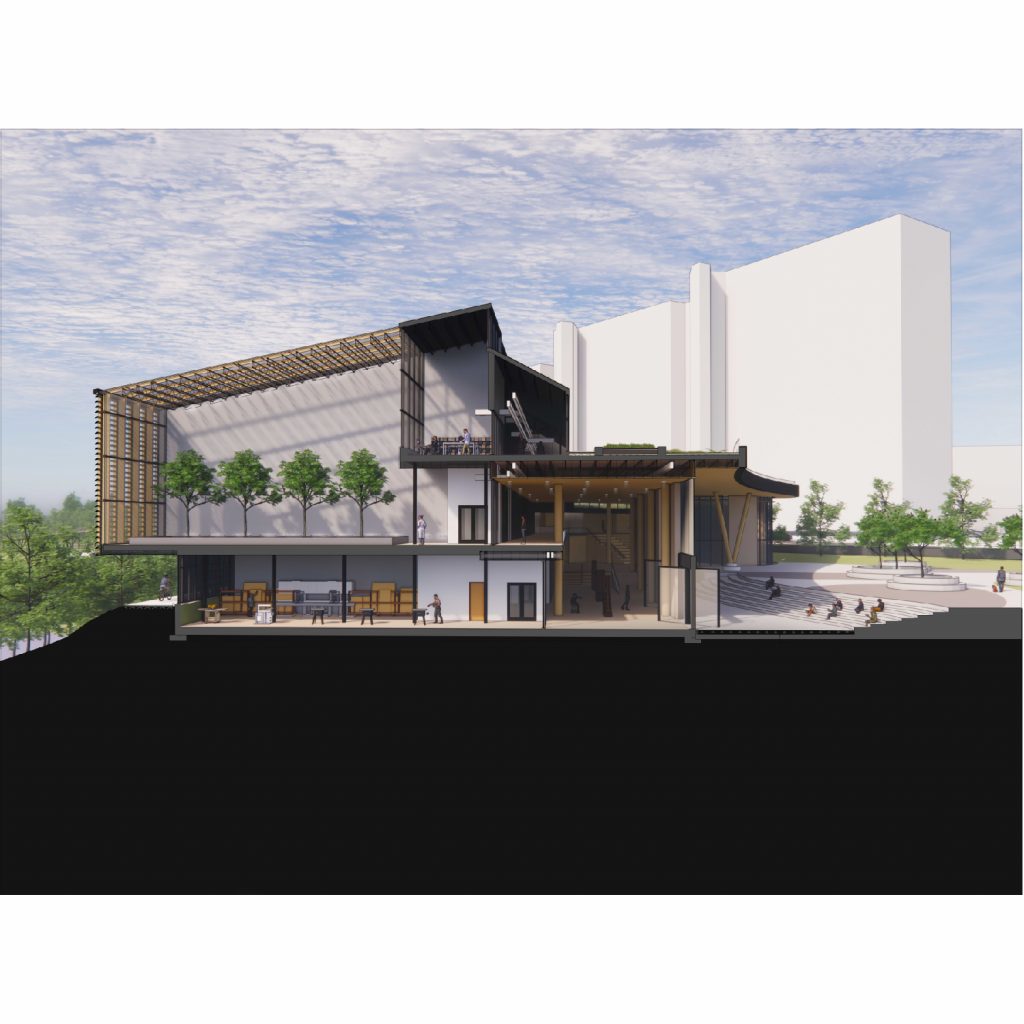 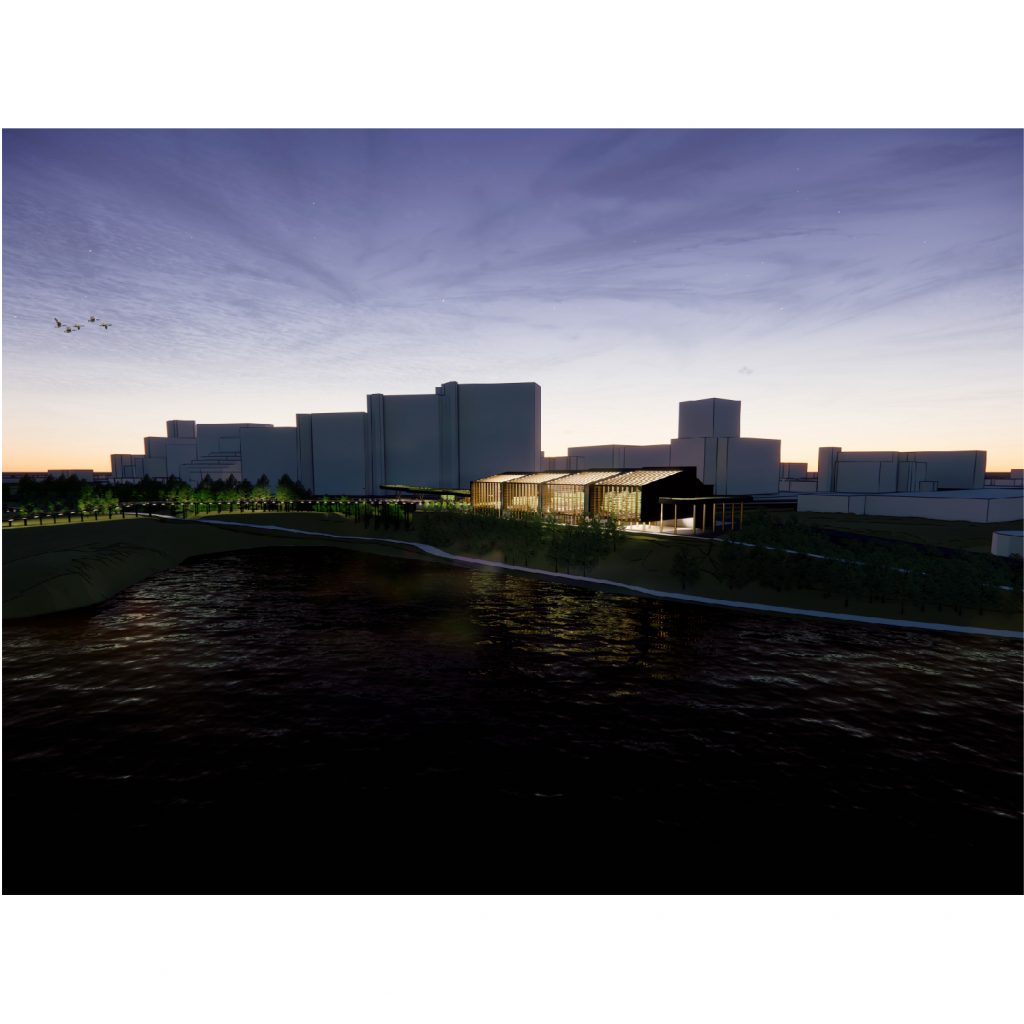 The National Forestry Research Centre linked the larger urban fabric of Gatineau and Ottawa with nature. The proposal aimed to be respectful to the existing landscape by building the centre on the site’s parking lot and then drawing urban connections through a series of elevated bridges.

Jury Comments: This building looked like it belonged on Confederation Boulevard. It had a great allusion to the Canadian Museum of History. While it’s grand, the spaces seemed approachable. It felt fundamentally public. 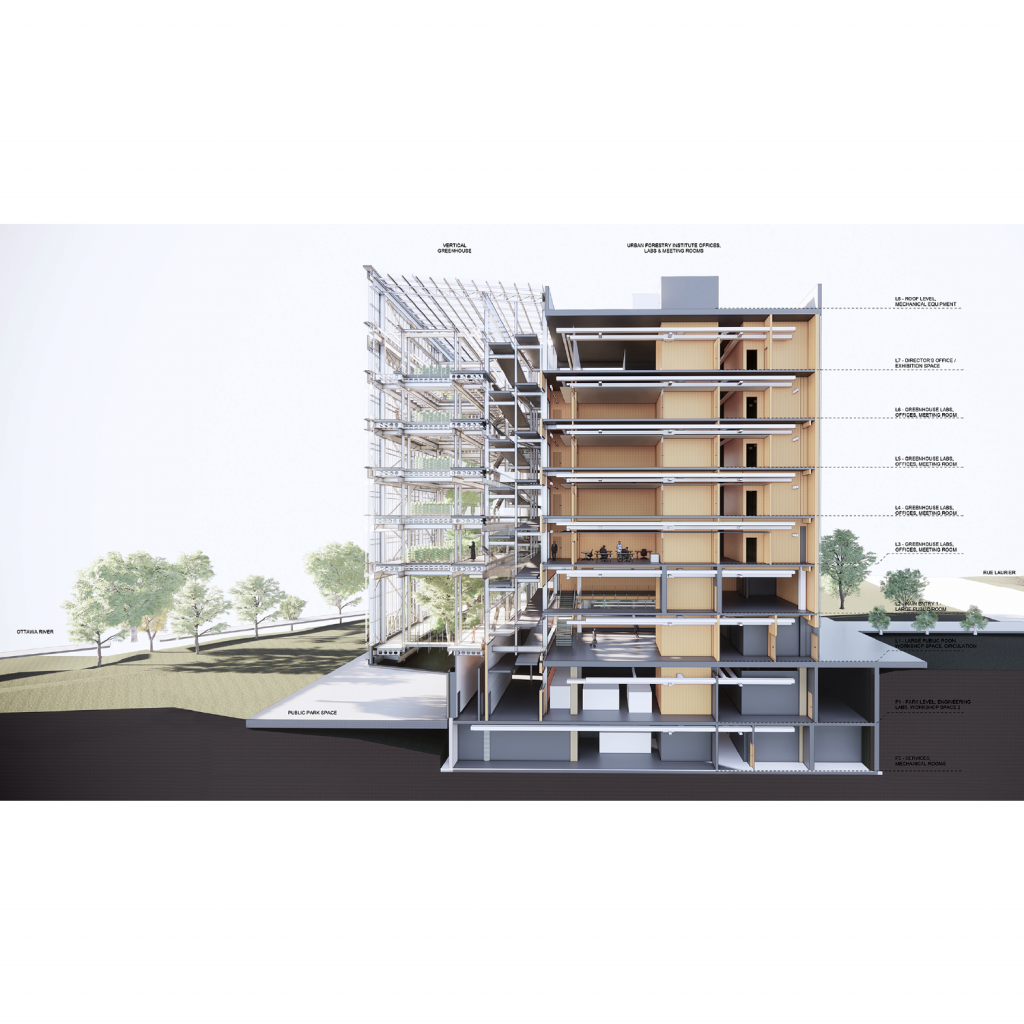 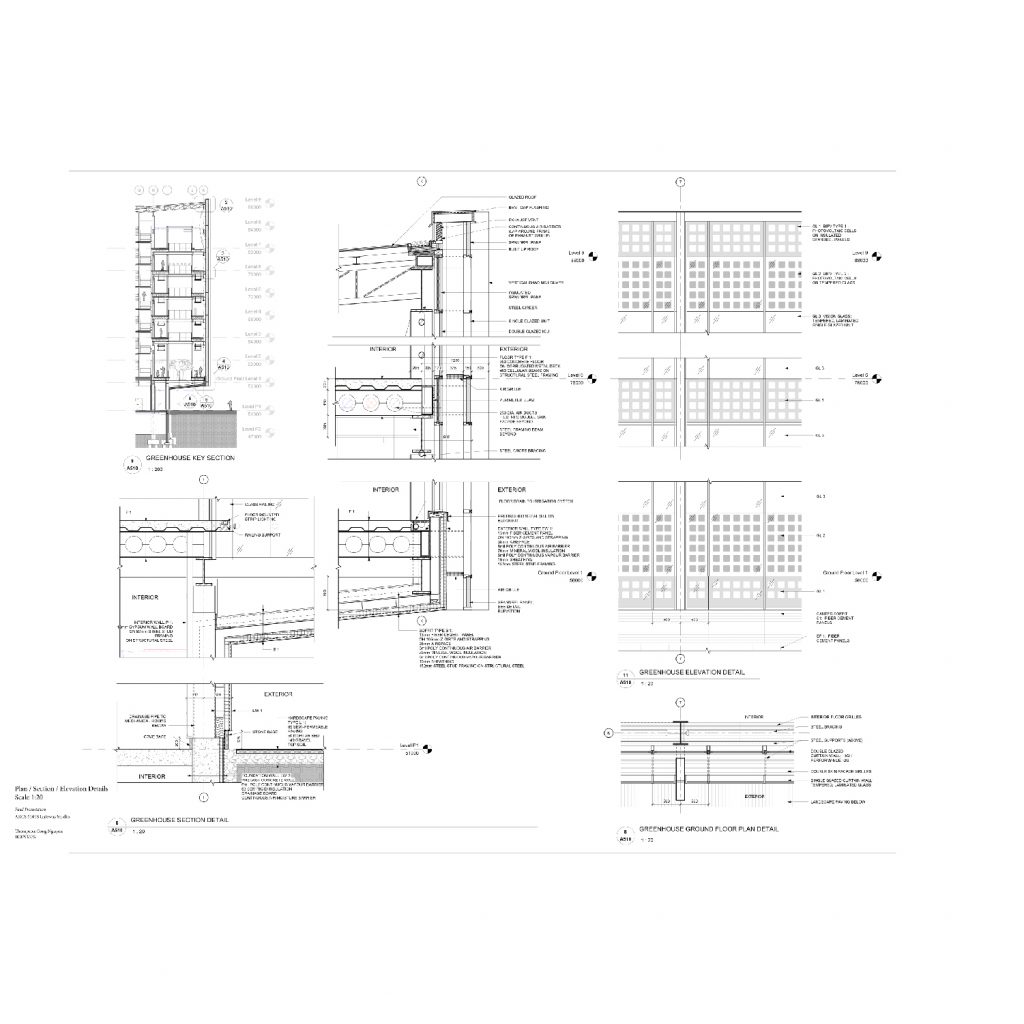 Six storeys of the vertical greenhouse are lifted and framed in steel and glass, aligning itself with the mass timber building supporting the institute’s private lab and public programming. From the park level, a rising circulation ramp snakes between the greenhouses and labs, equalizing experiences up and down the building.

Jury Comments: We appreciated the small footprint and how he was able to control the program and put it together in a very compact way. This is a building that stands out. It has elegance. It was clearly the most different of the projects. 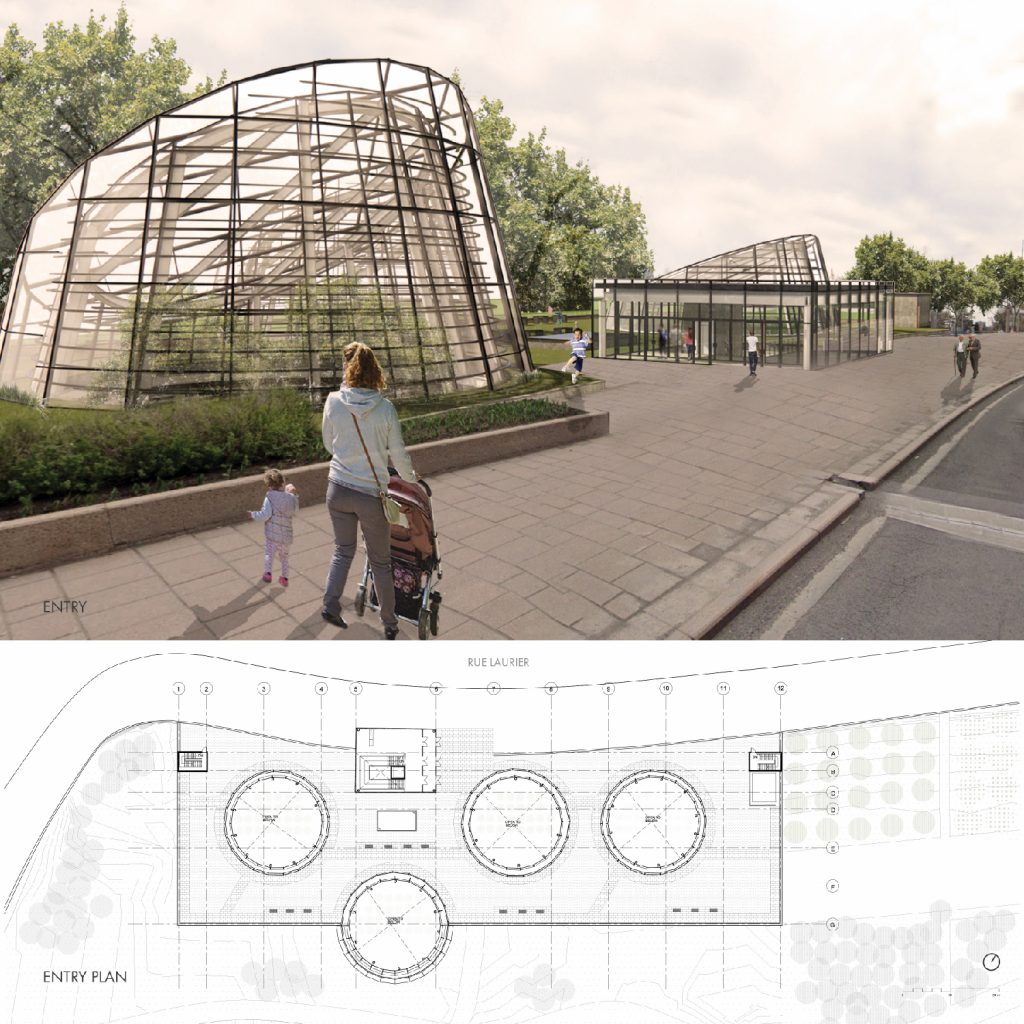 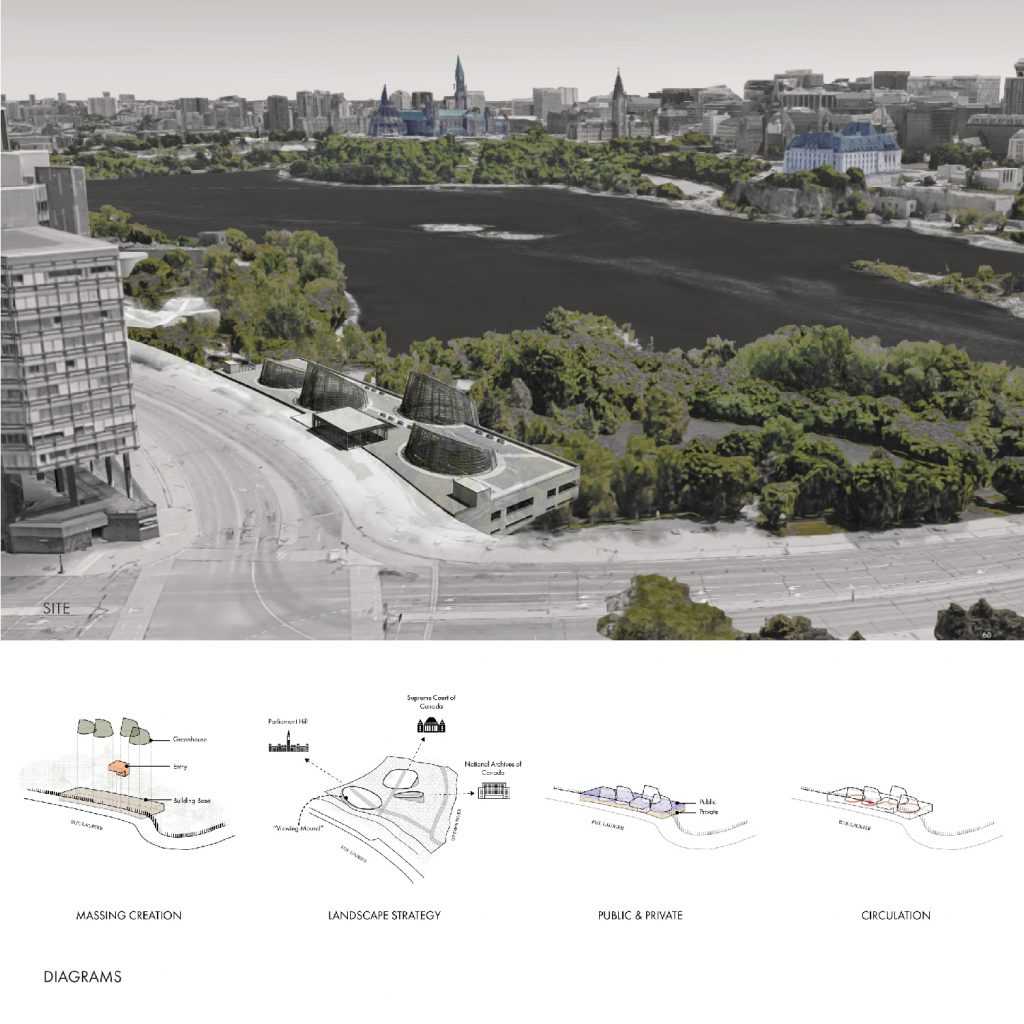 The building consists of four conical forms that emerge from the landscape while the solid base becomes a part of it. The conical forms house greenhouses and make a visual reference to the paper mill smokes stacks adjacent to the site. Planting areas are integrated with the viewing mounds for views across the river.

Jury Comments: This one hit it right. It’s equally a building that disappears and stands out.  It provides opportunities for nighttime and winter views overlooking the river. Many people would come away satisfied that they’d had an interesting interaction with the building without having to enter it. 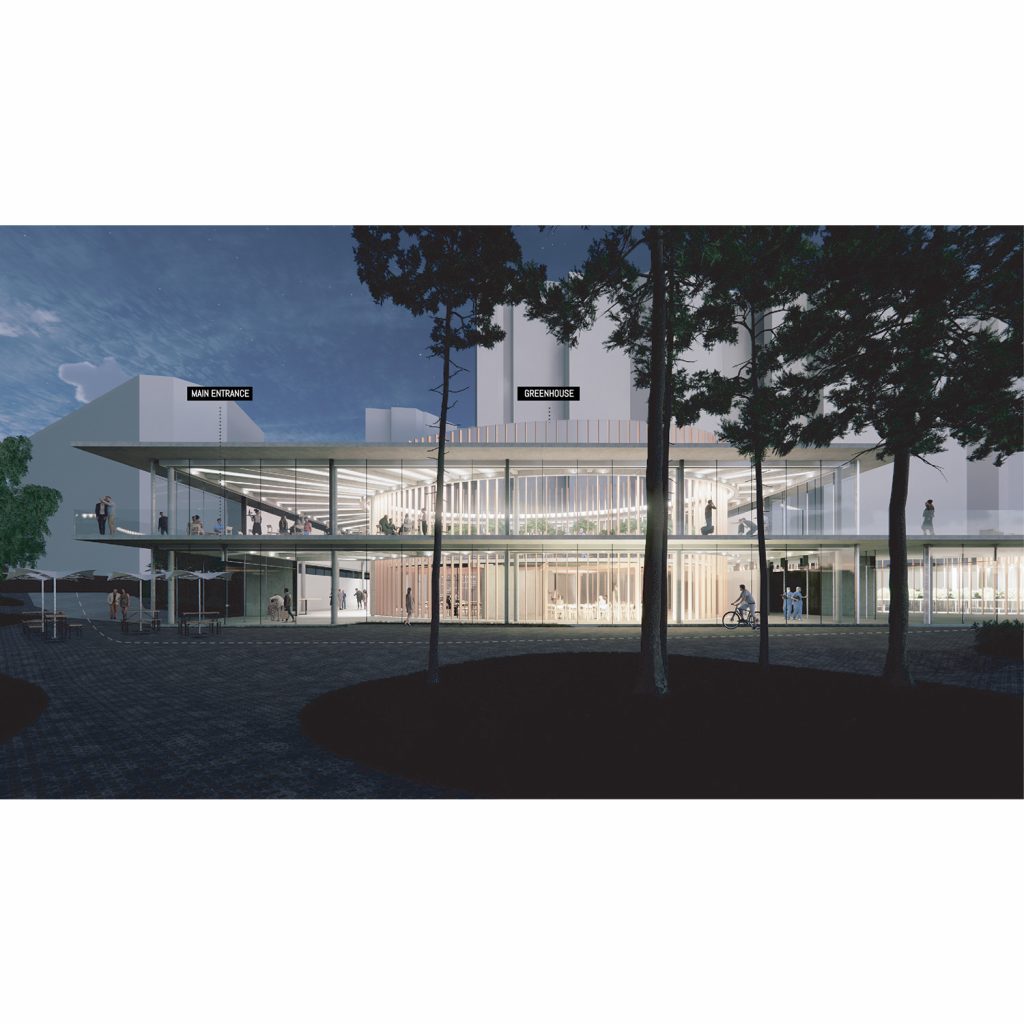 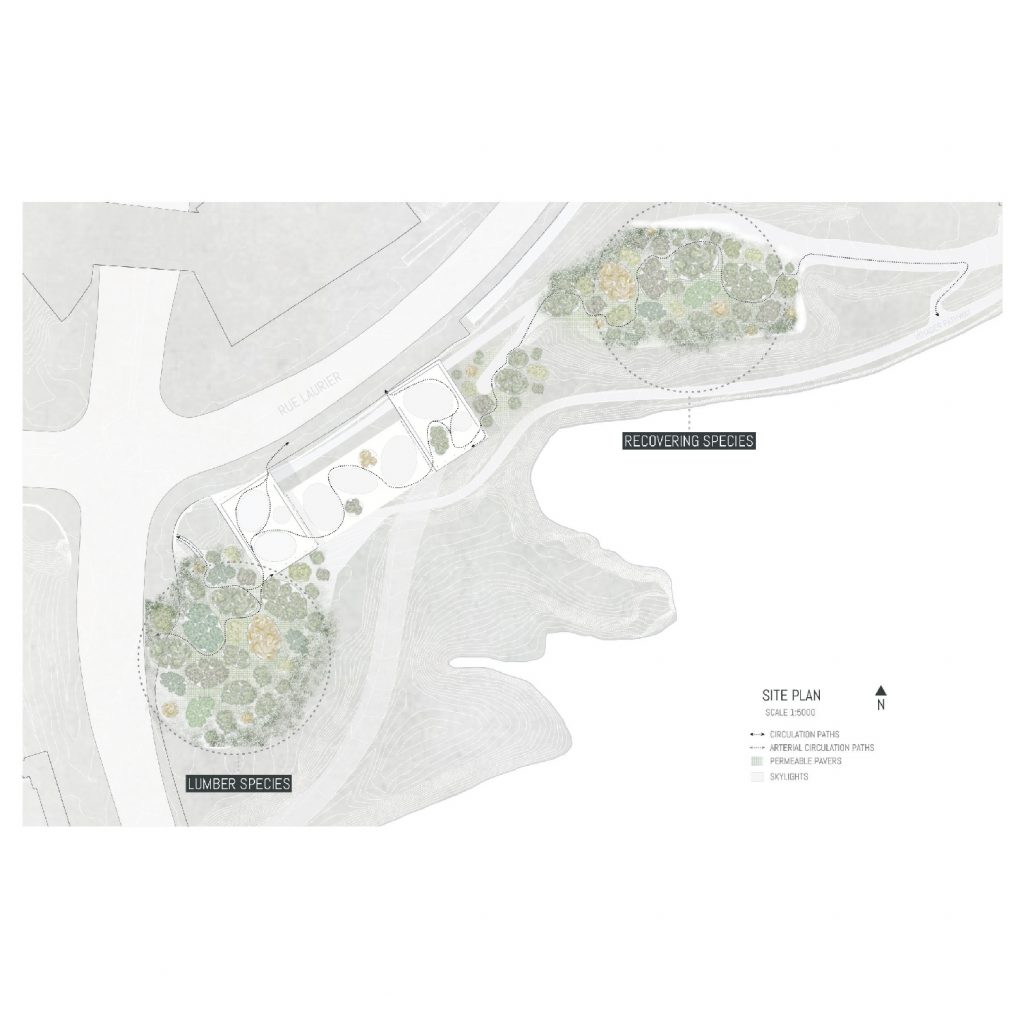 The Seed Forestry Institute aims to connect with the voyager pathway and create more meaningful connections between Rue Laurier and the park below. Interior greenhouse and research pods, surrounded by public circulation, allow for an educational exhibit for users who can pass through the building without disturbing internal functions.

Jury Comments:  This project stood out for the quality of its presentation. There is a strong effort put into illustrating the building. The student has made the structure disappear. It becomes a transparent building, but it’s not just a big glass box. 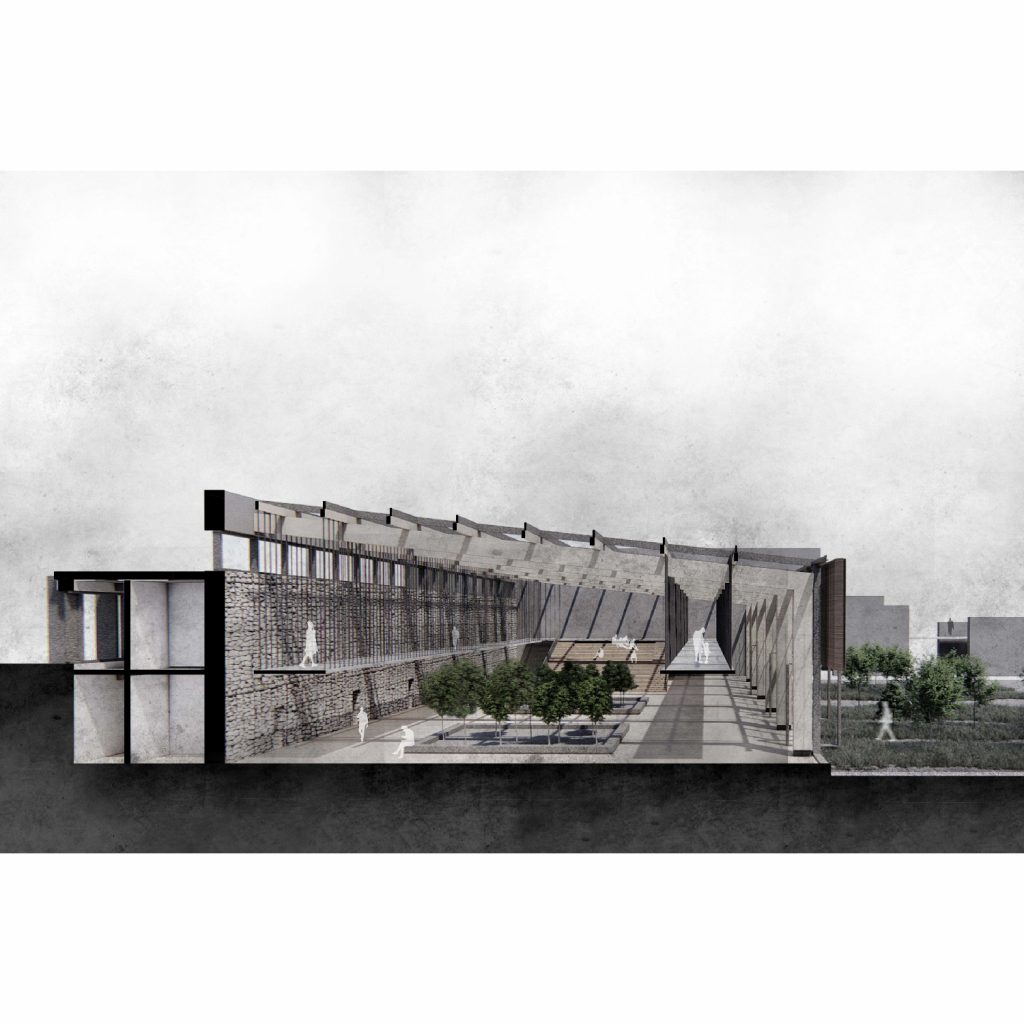 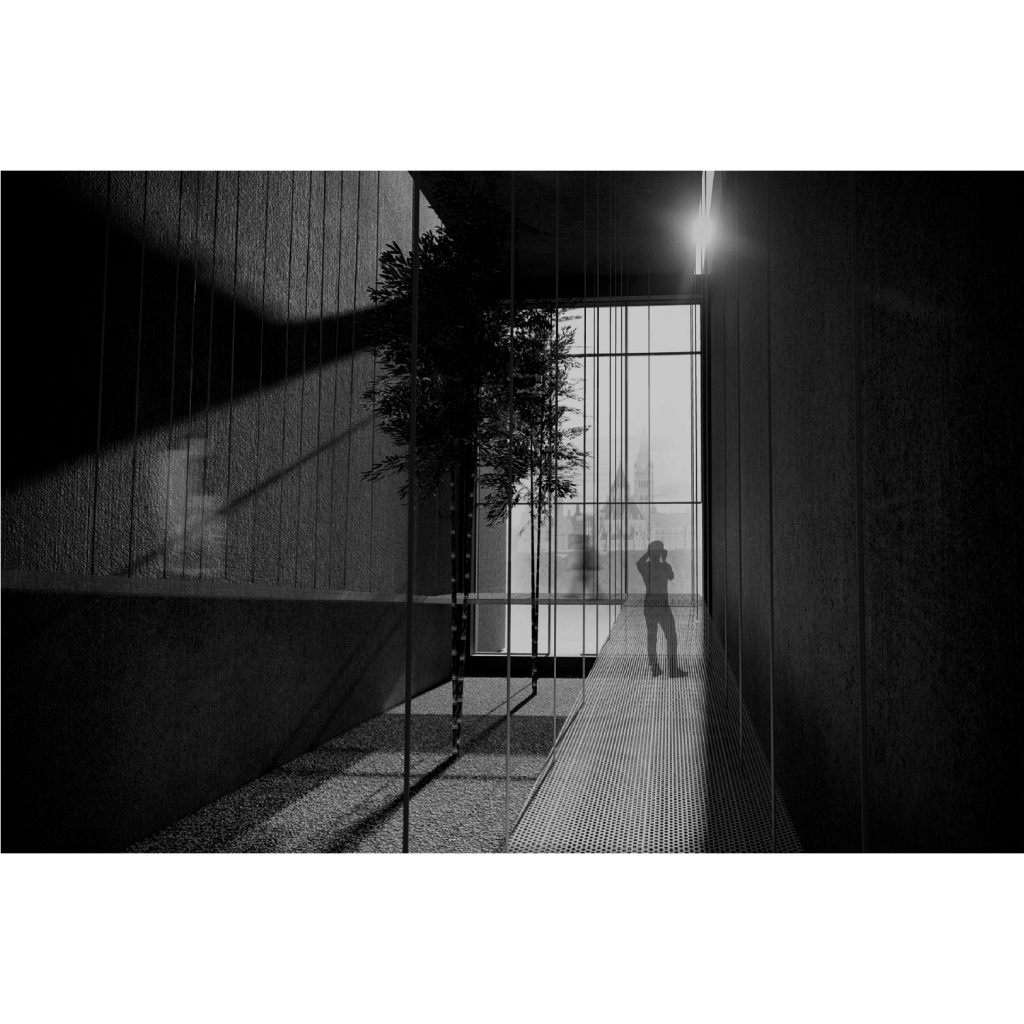 Given a rich site with history and national landmarks such as Parliament Hill, this project aims to celebrate the site’s national profile rather than compete with it. The visitor is taken through a series of low, dark, narrow, and dramatic spaces in preparation for the arrival at the main space, the greenhouse.

Jury Comments:  This project showed the materiality of the building, more than we saw in other projects. Creating edges along the site transforms it. One can imagine having fun exploring along those walls as though they were part of a ruin. 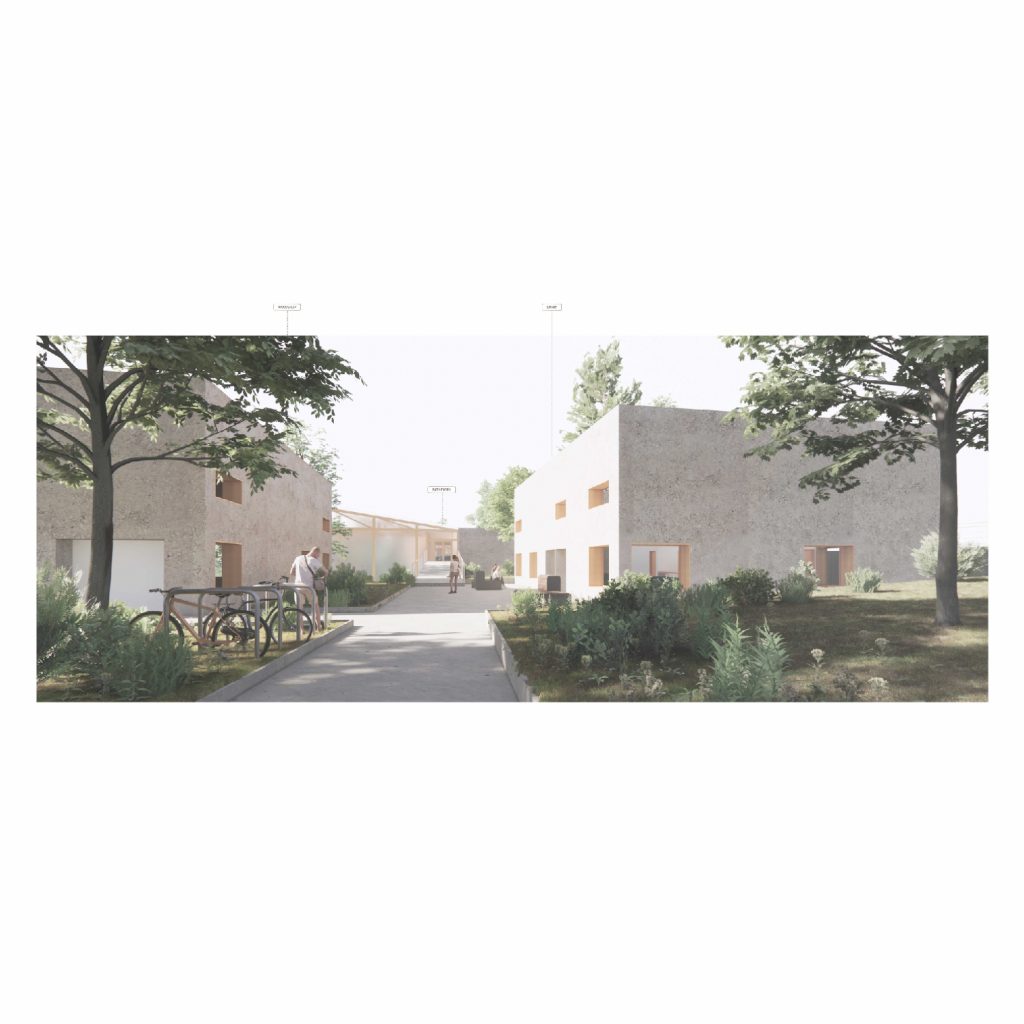 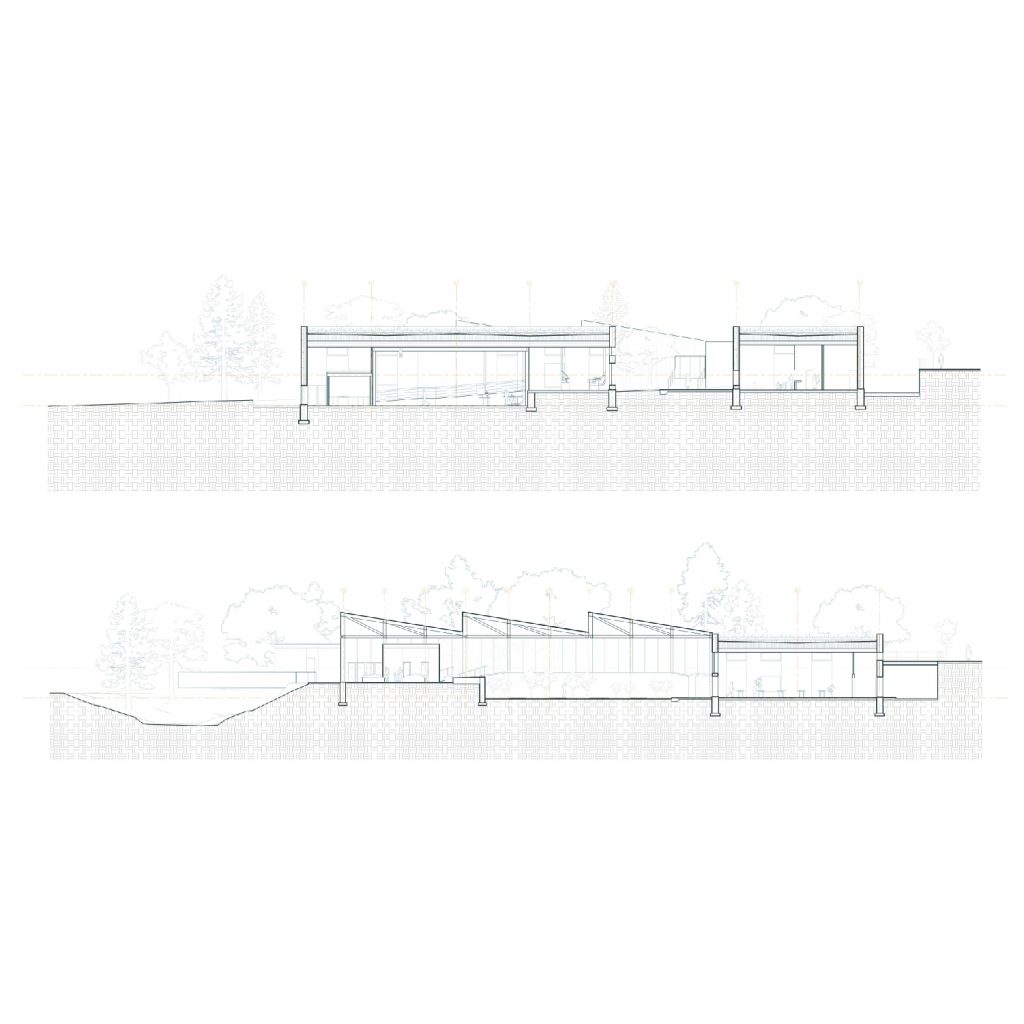 The Forestry Research Institute sits lightly on the site. The program of greenhouses and labs are split between five buildings. Gaps between the buildings leave strips of the site undisturbed. The project uses sustainable construction methods such as rammed earth and mass timber, reflecting the Institute’s research of wood and earth.

Jury Comments: This is a beautiful representation and a  convincing parti. It’s simple, and it works. 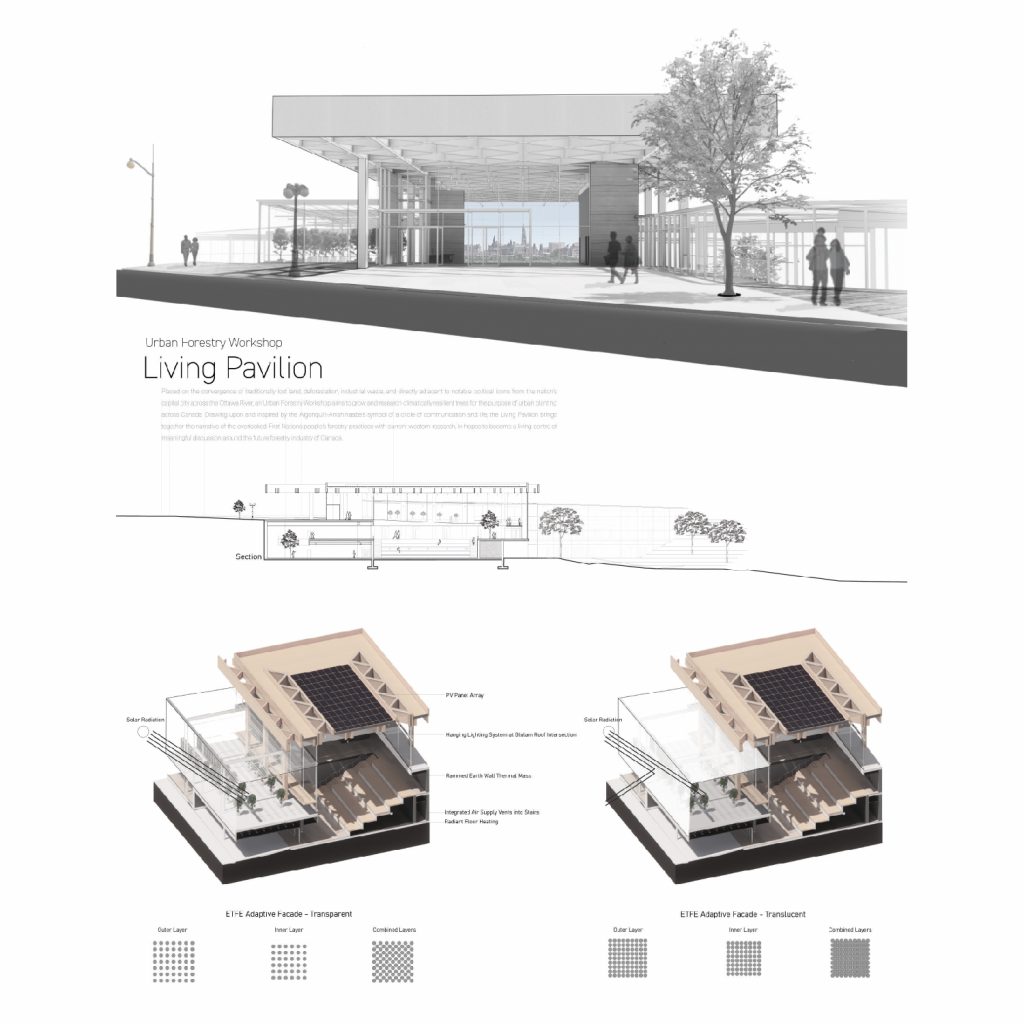 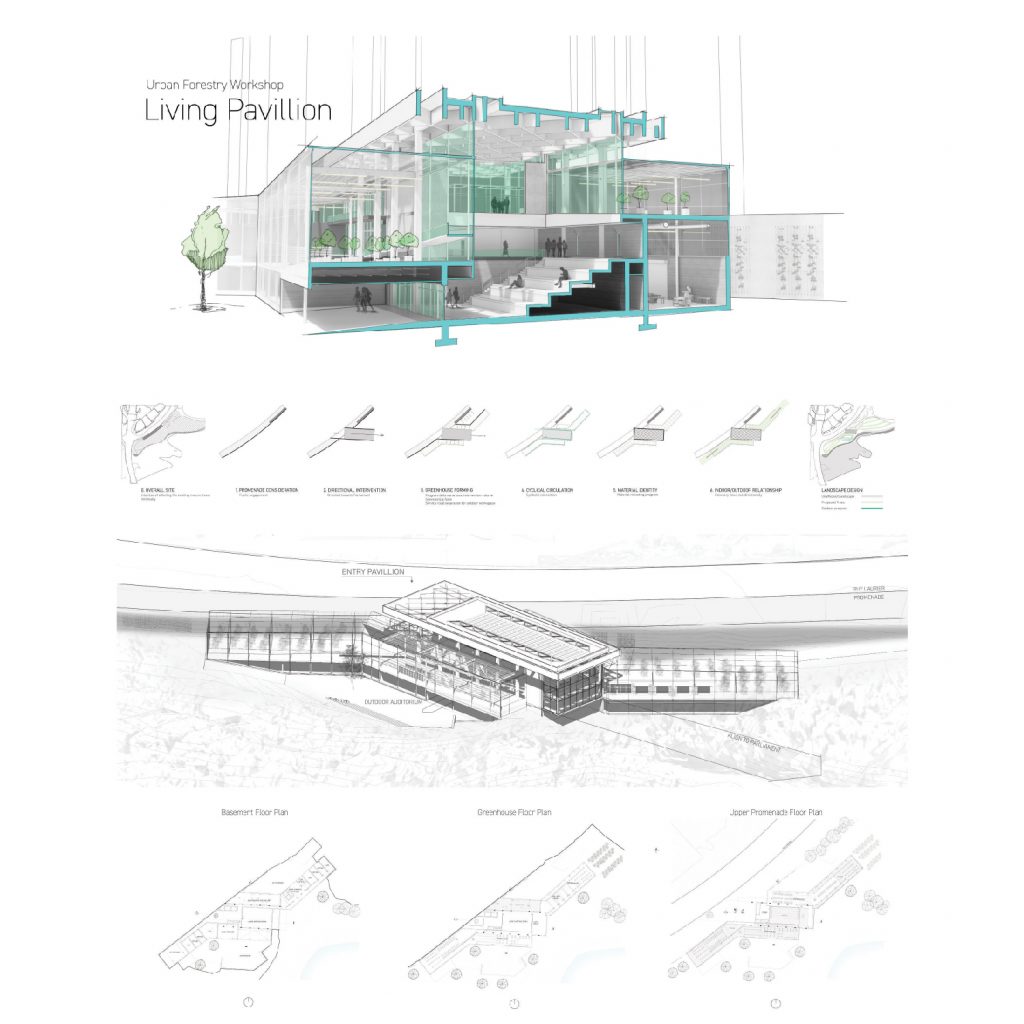 Drawing upon and inspired by the Algonquin-Anishinaabe’s symbol of a circle of communication and life, the Living Pavilion brings together the narrative of the overlooked First Nations people’s forestry practices with current Western research. It hopes to become a living centre of meaningful discussion around the future forestry industry of Canada.

Jury Comments: This project had an excellent formal strategy, focus on public access, and experience of the building. The entry pavilion raises the level of aspiration, so it deserves to be on Confederation Boulevard. 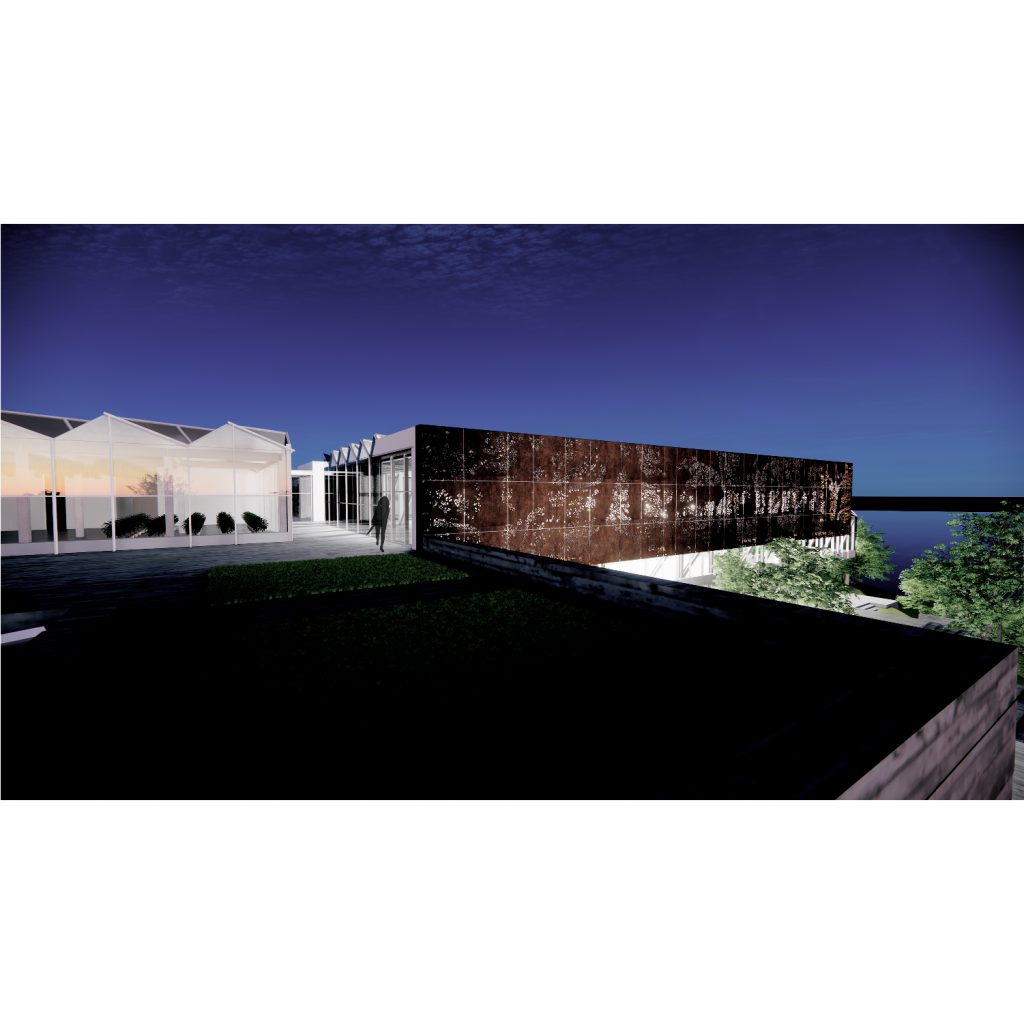 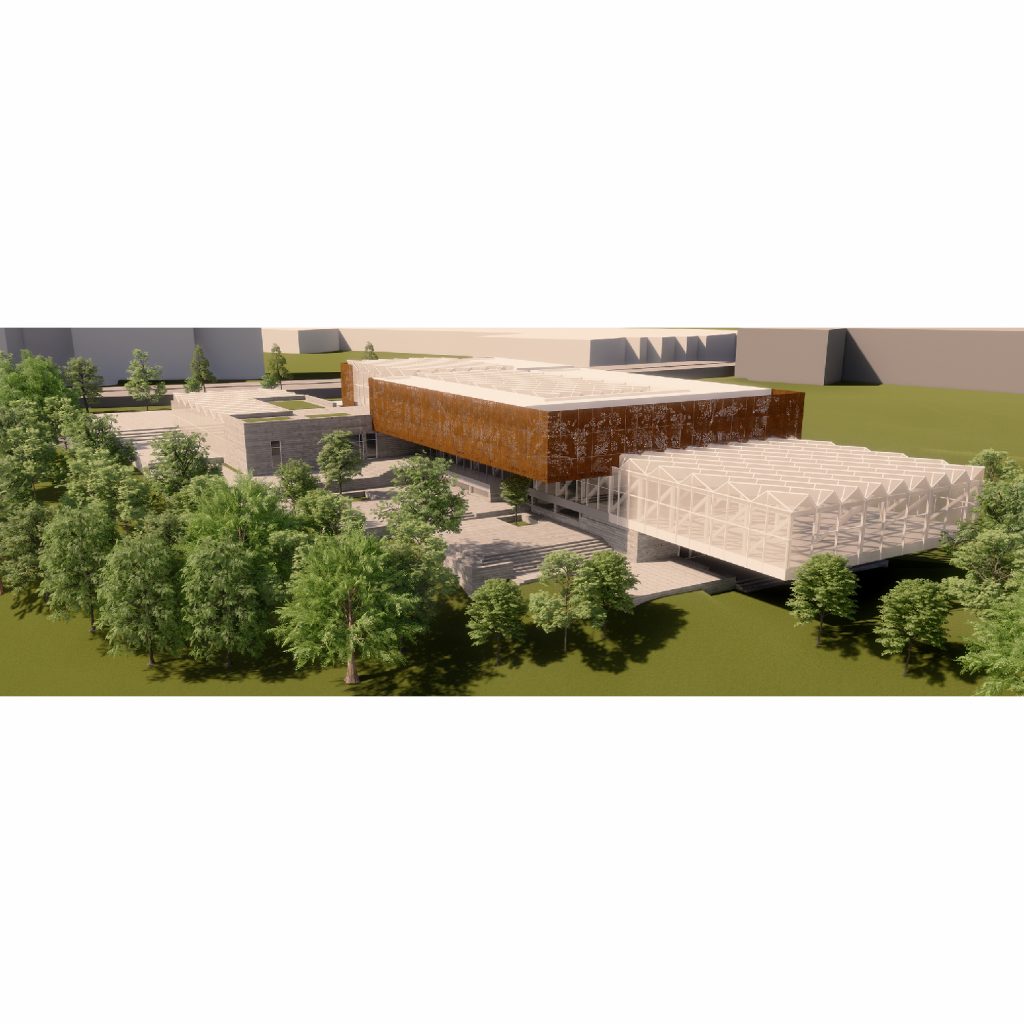 The design for the Urban Forestry Research Centre was driven by the idea of the building as an educational machine that could be experienced differently, yet effectively, by the worker, visitor, and pedestrian. The circulation works like a Mobius strip, guiding the user through the building regardless of which entrance they use.

Jury Comments: This project demonstrates admirable thinking about the site.  The atmosphere of the drawings was unique among the projects.

Associate Professor Paul Kariouk noted that alumnus Stuart Elgie started the award. “Over the last decade, Stantec has contributed over $50,000 to the school, and we are very grateful.”