Winners of the 2021 Hobin Prize in Architecture & City Building

The jury also cited two additional projects for the quality of their work.

The prize recognizes excellence in the fourth-year comprehensive housing studio at the Azrieli School of Architecture & Urbanism.

“Master-planning and the public realm are important themes,” said Ottawa architect Barry Hobin, a graduate of the school and founder of Hobin Architecture, which endowed the prize. “You need to focus on the relationship to other buildings, thinking of the building in its context, not just sitting by itself. These are things that take architecture into the realm of city-building.”

The studio explored the redevelopment of:

• Dustbane Site (adjacent to the Ottawa Train Station), in partnership with Colonnade BridgePort; 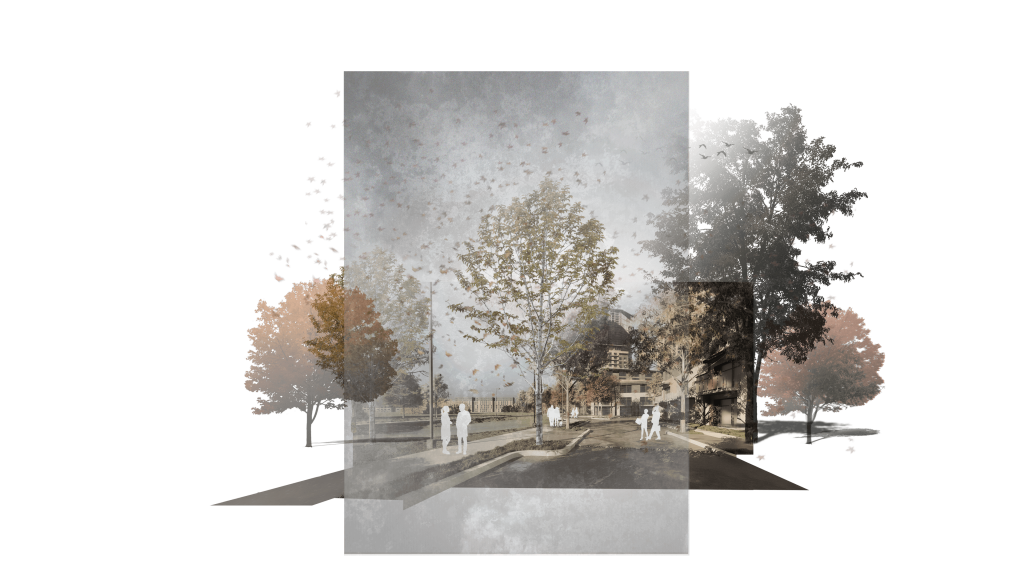 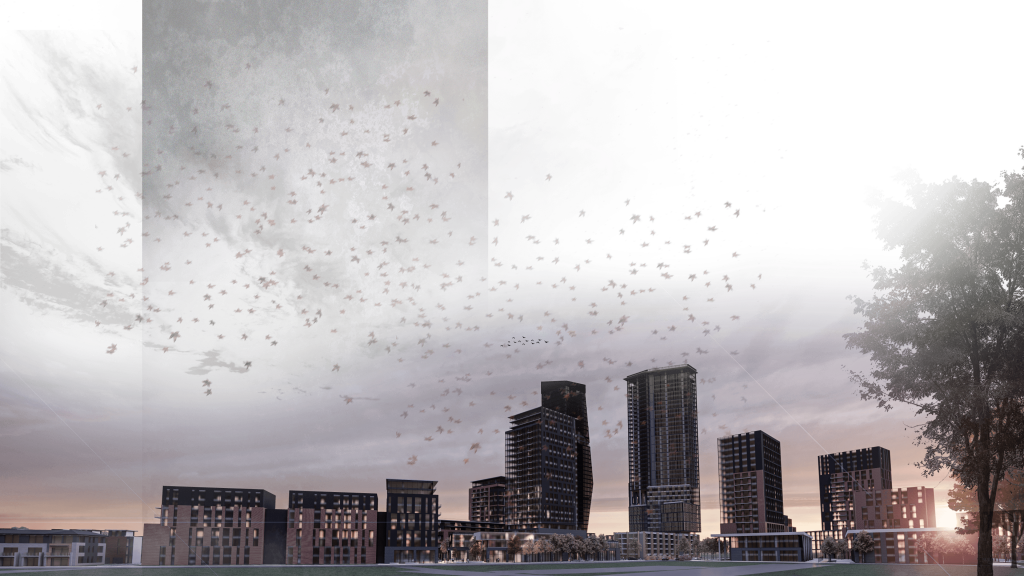 The first prize of $1,000 went to Cameron Maiolo and Mark Meneguzzi for Carleton Square Redevelopment, which proposes intensifying a site west of the Fisher Avenue and Meadowlands Drive Intersection. The plan sets out a central district of high-rise towers plus an area of mid-and-high-rise buildings that tapers out to single-family houses and townhouses. It includes commercial development and paths connecting to the adjacent park.

“It’s very complete, clear, and organized…right from the master plan down to the consideration of spaces as well as buildings,” according to the jury. 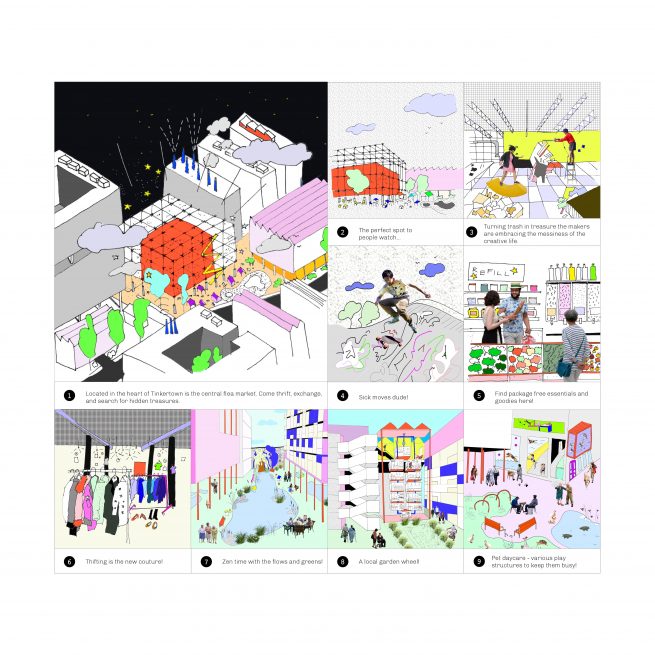 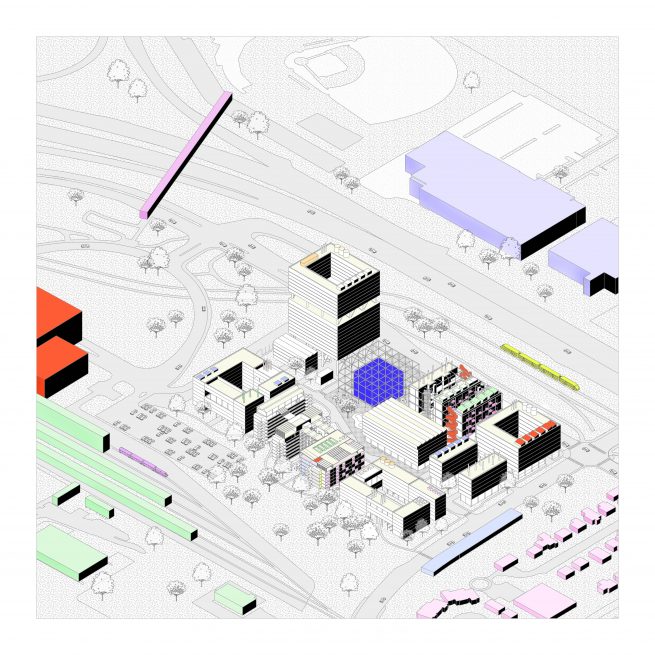 The jury members awarded two second-place prizes of $750 each.

Tinkertown, by Enid Huang and Odessa Boehm, is a mixed-use development on the former industrial Dustbane site. It is “our interpretation of a housing project for the future; one that blends and mashes conventionally segregated pieces of the built environment into one,” they said.

“It’s visually engaging,” said the jury. “The eyes are invited to explore all the nooks and crannies of the drawing. Each component of the project has its own character and its own identity, but it also hangs together really well. We also liked the plug-in quality. It’s like having a jumble of Lego pieces. They are all of the same family, but they can be swapped out easily.” 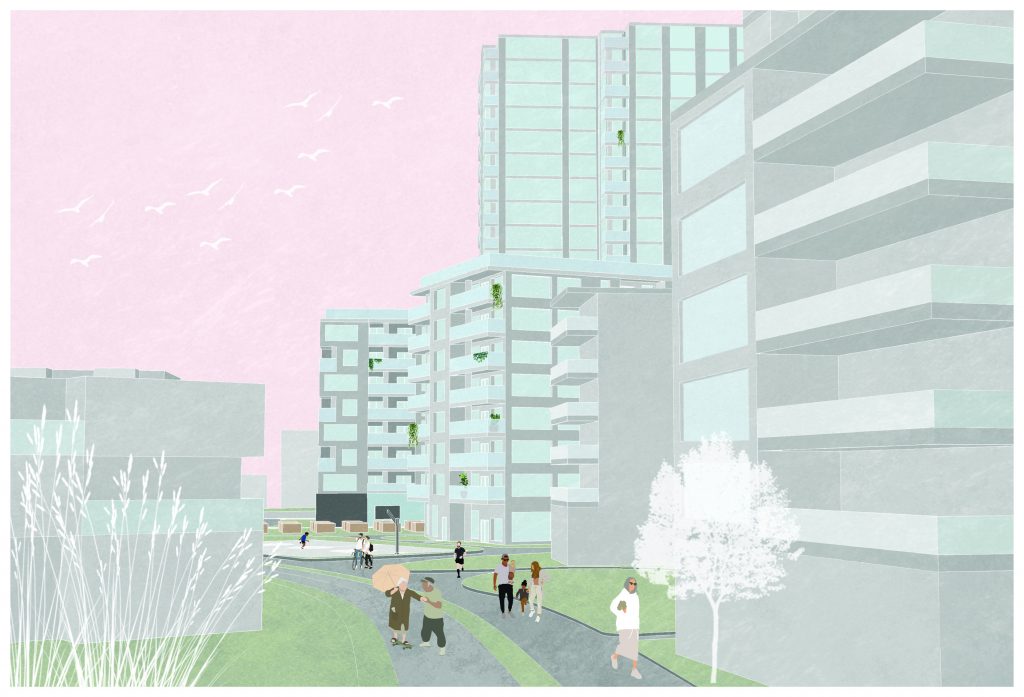 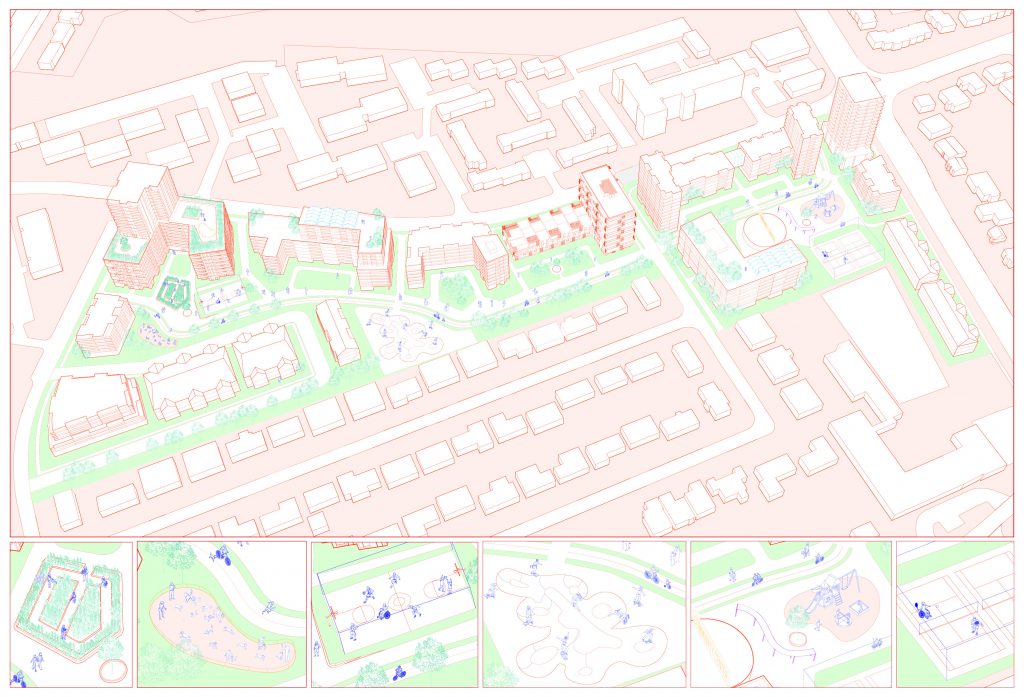 Traverse Community, by Emily Lalonde and Victoria Broadfoot, at the intersection of Fisher Avenue and Meadowlands Drive, “is a development designed to increase density while also creating engaging urban spaces for the community,” said the authors. “It features a green corridor, with walking paths and bike lanes, that stretches across the site, connecting residents to a variety of outdoor programs.” Each building has a communal rooftop terrace.

“The community spaces between buildings were thoroughly developed and visualized,” said the jury. “We liked how each of the different buildings had a different landscape in front of it. We also really appreciated that these units are really tight. There’s nothing extravagant about them. It’s the public realm where the attention went. Beautiful graphics. We thought this was very coherent and masterfully put together.” 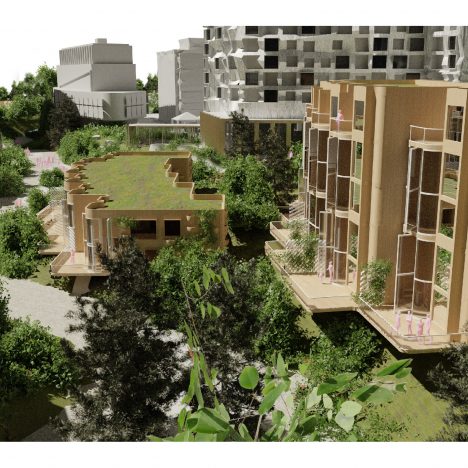 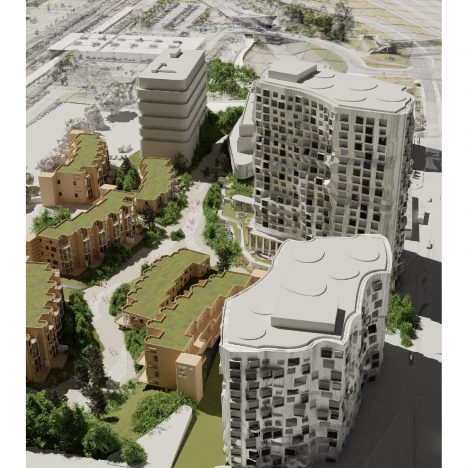 The jury also awarded an Honourable Mention of $500 to Valley by Jimmy Ear and Isabel Serna-Moll. The scheme modifies the Dustbane site to form a landscaped valley around which the buildings are organized. “The central green valley drops users 18 metres below grade into an endless playground,” for activities such as rock climbing in the summer or tobogganing in the winter,” they said.

“The idea of creating a three-dimensional topography on which to arrange pieces is quite a great opportunity and a novel approach,” said the jury 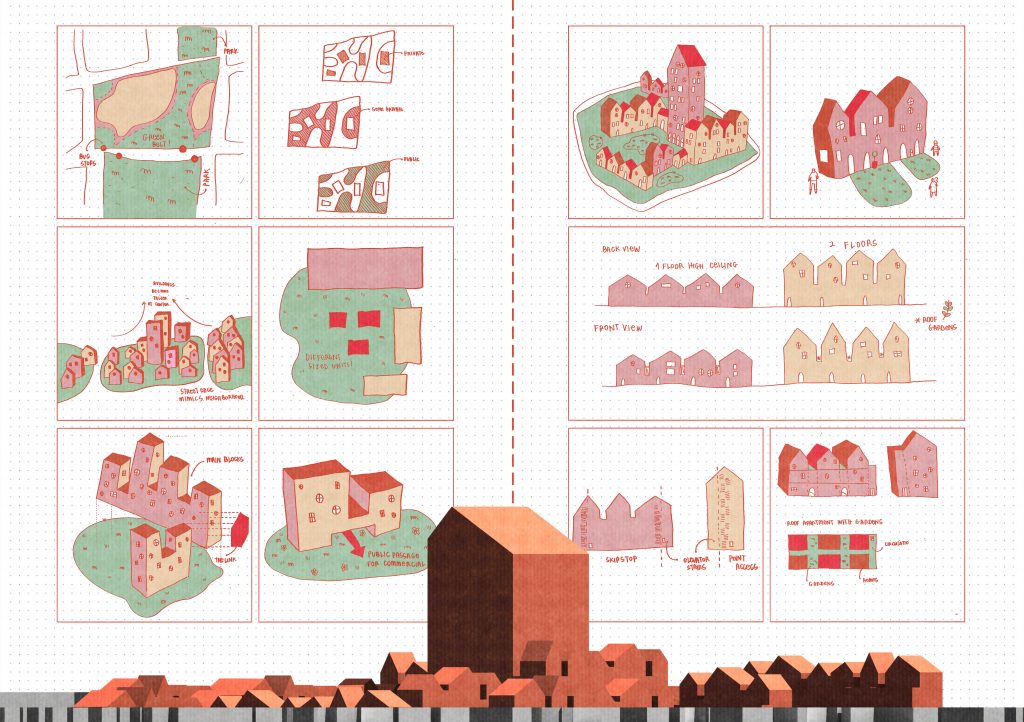 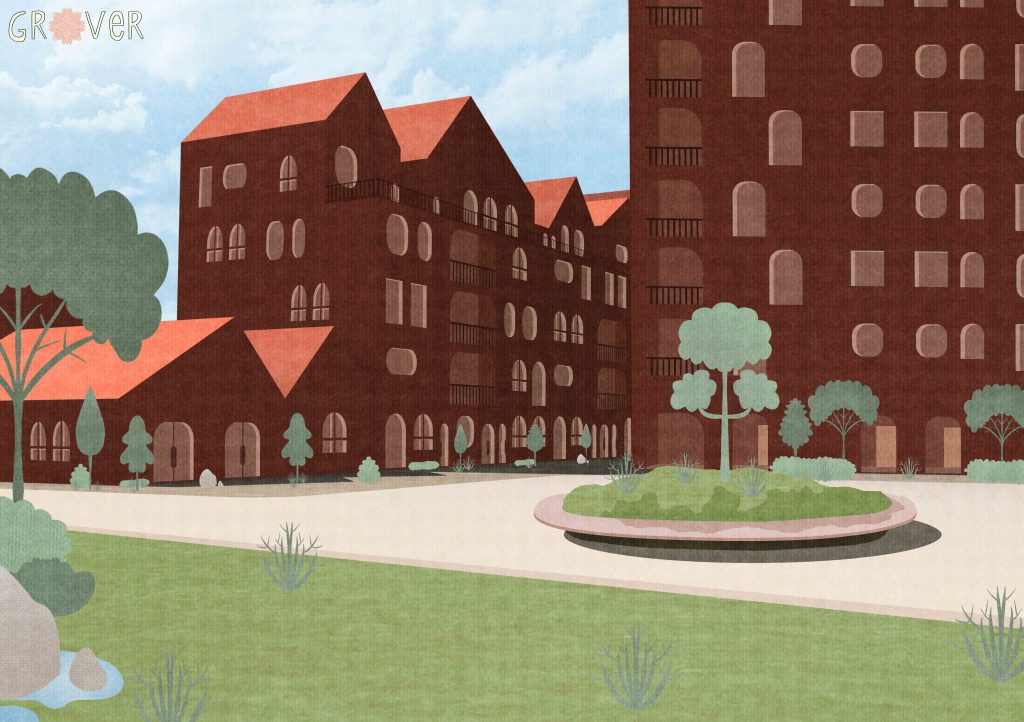 In addition to the winners, the jury praised two projects for Pinecrest Village.

Grover, by Lara Sedele, proposes a dense residential development with a strong domestic character based on low-to-mid-rise brick buildings organized around green spaces.

“The site plan had a lot of strength,” the jury noted. “You can understand what you’re looking at. You can imagine yourself in those spaces. There is a lot of density put into low-rise, which was innovative in relation to the other projects. The graphics were enticing.” 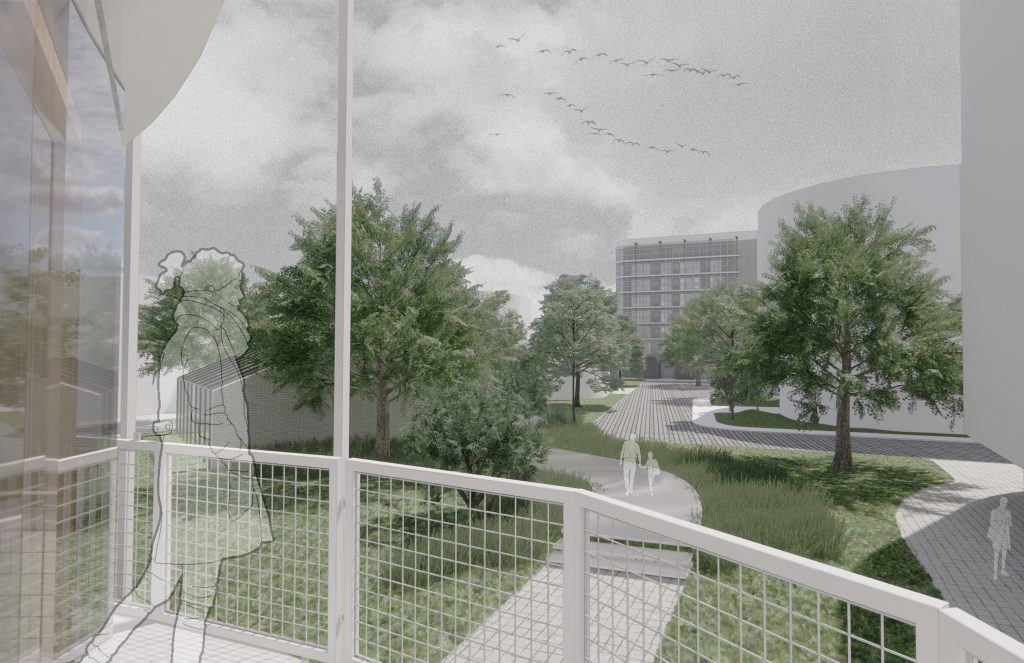 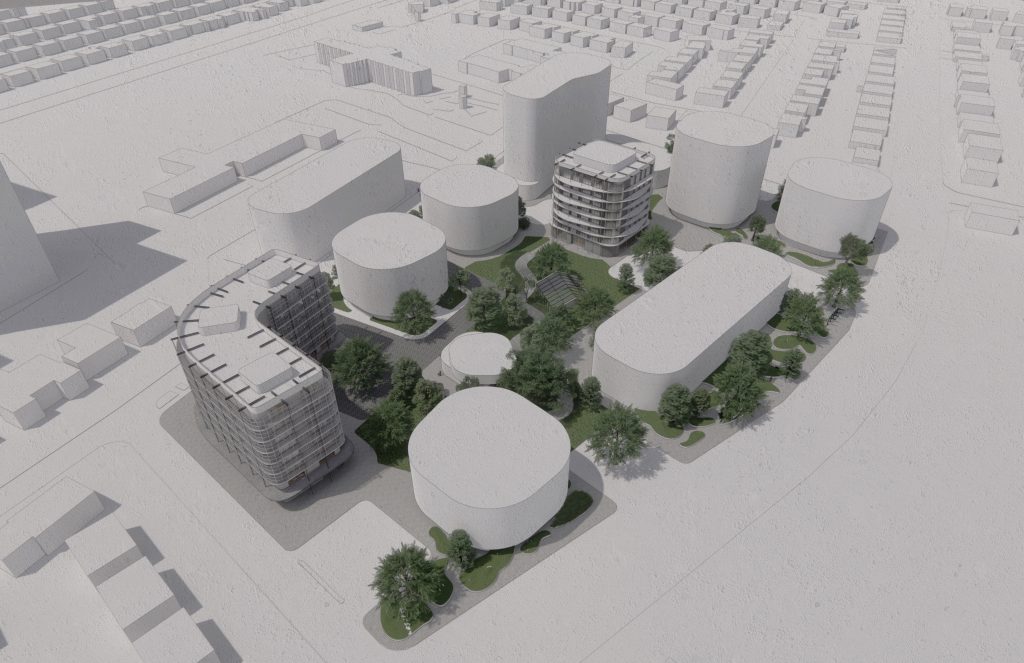 Pinecrest Village, by Goce Stojanoski and Alex Yang, is a mid-rise development of social and market housing that provides outdoor space with balconies and is preserves the existing greenery.

“It’s a very cohesive presentation,” observed the jury. “There are a series of vignettes that we can immediately place ourselves into and think this is a place I’d like to come home to at the end of the day. It’s the public realm which is first and foremost.”

Following jury deliberations, the awards were presented at an online ceremony.

Hobin reflected on the sites, noting that future LRT stations at Dustbane and Pinecrest Village will alter their futures. Dustbane is also transitioning from industrial use.

“These present really interesting opportunities, given the opportunity of connecting to transit, and thinking about how to intensify but also how to create economic diversity.”

Parkwood Village was unusual in that Minto had introduced high-rises into this subdivision back in the 1950s and 1960s. The firm also invested in an in-house architectural team that explored a variety of housing typologies.

“And now we’re looking at it in a new way, saying ‘What would happen if we added more density to it?'”

Hobin also addressed the fact that students worked on the projects at home and online due to the pandemic.

“For anybody working in this field, whether you’re a professional in practice or a student, being creative in an isolationist world is complicated and challenging,” he said. “One thing you miss is the ability to collaborate and engage people in the same space.”