Work by 15 MArch students at the Azrieli School of Architecture & Urbanism is on display in the School’s section of the Virtual Design Festival on Dezeen.

Images and descriptions of the projects can be seen below.

Dezeen is an online architecture and design magazine that attracts about three million visitors a month. The Virtual Design Festival is on until July 10, 2020.

The projects were created either as part of the students’ thesis work or during the course’s Option Studios, which cover a range of current topics from extreme landscapes to divided cities.

Course statement: The Master of Architecture’s six-week Option Studios explore a wide range of themes, including extreme landscapes, divided cities and drawing codes. Eight of the projects represented in this showcase are from these winter 2020 studios, including work produced with visiting tutor Neil Spiller.”The other six projects are from the MArch year-long thesis work. They include responses to global climate change challenges in New York and an architectural catalyst for post-war urban recovery in the Syrian city of Aleppo, as well as post-extraction futures in Newfoundland.”They also include narrative reflections on the relationship between architecture and comedy, a critique on excess through the design of a money-laundering bank for the 2021 Tokyo Olympics and a filmic reflection on techno-animism in Neo Tokyo. 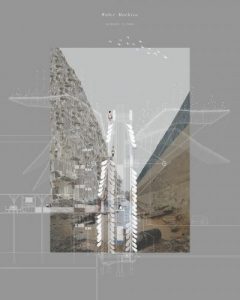 Against Gravity: An Exploration of Post-Conflict Aleppo by Maya Jarrah

“Against Gravity aims to reconstruct some of the many facets of the Syrian town of Aleppo through the introduction of architectural nodes.” One example is the creation of a water machine in the Al-Shaar neighbourhood. At this exact location in 2014, photographer Hosam Katan documented young boys swimming in a crater formed by a barrel bomb, capturing not only a landscape of destruction but also joy and adaptation.”Inspired by the historical water basins and faucets in Old Aleppo, the structure’s primary purpose is capturing rainwater and providing filtered water to the residents and passersby as the reconstruction of the city takes place.” 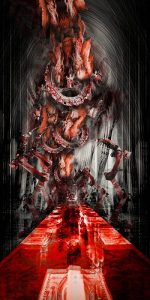 “This project for a restaurant was designed in response to a brief, in which students were asked to select a site in Ottawa’s Chinatown, a type of cuisine and a plant from which to create a surreal eatery.

“The creation of artificial meat inspired this solution. Every new meal in this uncanny and marvellous environment births a unique, organic architectural mass. In Vitro Meat climbs stark, white structures of bone and stone. The same mechanical arms that weaved together the fibres of fat and muscle delicately slice portions for the guests – a ‘Carnery’.”

Studio: Flora and Fauna – Feasting in the City
Website: nbava.net 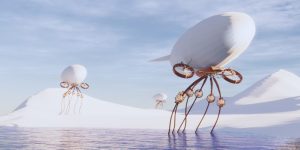 “In the 1890s, the indigenous people of Canada’s Arctic were, at their request, left isolated after a brief period of technological and resource exchange with the Western world.

“In 2020, invited to re-connect, we discover an otherworldly society living and hunting with advanced electric dirigibles and gliders. They have evolved 19th-century Western technology to amplify their preferred way of life: crossing the land and sea in silence, without leaving a trace.

“This project is a tragic ‘what if’ scenario, that strives to bring awareness to the damage caused by forced westernization of the indigenous people of the Arctic.” 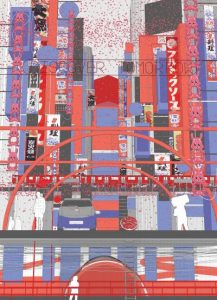 “This thesis aims to critique the financial waste created as a result of the Tokyo 2020 Olympic Games. It proposes a hypothetical bank for money laundering, which would use government money and turn it into profit for corporate investors.

“The research examines how Tokyo will host the Olympics – speculating on how the government of Japan intends to spend funds and how the government and major corporations might mismanage these finances. The thesis explores the front- and back-of-house relationship between the project, site and people that are integral to the Olympics, to reveal some of the harsh realities of hosting.”

“Missiles, defying the sky’s boundaries, occasionally land in unrecognized Bedouin villages in the Negev or Naqab desert. While all residents require access to a bomb shelter, a lack of land rights – necessary to build permanent structures in unrecognized villages – leaves the Bedouin in a catch-22.

“CATCH-22 alerts communities of incoming missiles, informs users of danger and signals for medical attention. The system combines high-tech components in the sky with low-tech systems, assembled by Bedouins using recycled materials. This creates an infrastructure where scientific motion and kinetics initiate a domino effect, producing an emergency response. ”

“Upon discovery of gold in the Witwatersrand, the scarring of the landscape has produced disastrous environmental consequences. The yellow mine dumps are rich in heavy metals and oxidize through rainfall, resulting in contaminated groundwater that resurfaces and seeps into rivers.

“The Acidic Landscapes maps analyze the pollution created by the mine tailings in a liquid, solid and gaseous state. The liquid map measures polluted groundwater seepage into rivers. The solid map measures the pH levels of the ground along the gold reef. The gas map depicts the chemical composition of dust being blown off of the tailings into Johannesburg’s communities.” 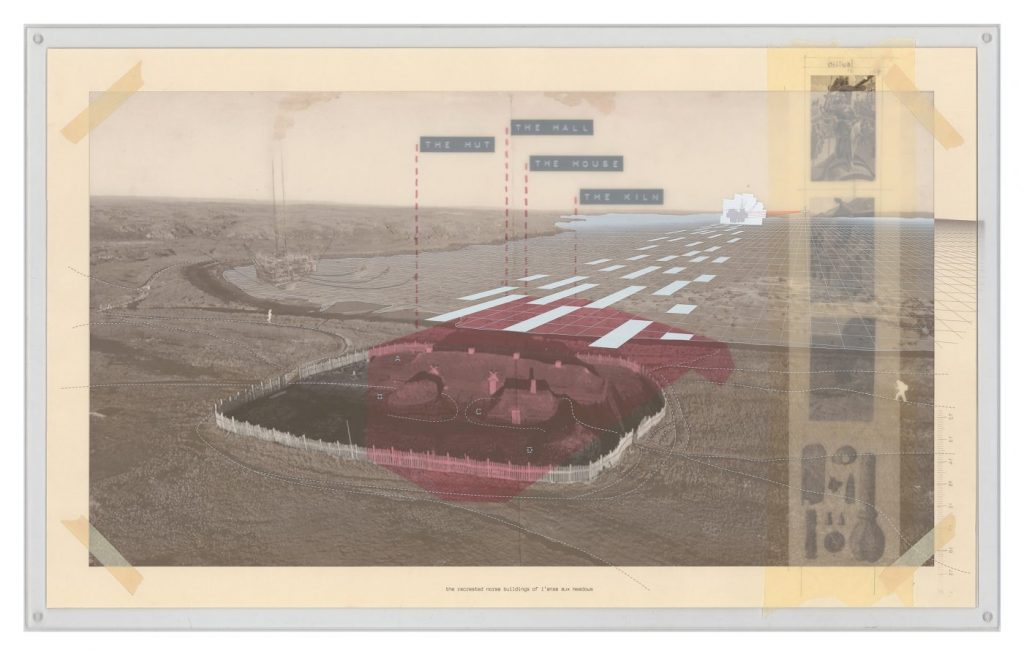 Life on the Edge – The Archaeologist, the Oil Rig and the Newfoundlander by Zac Coughlan

“This image is a digital scan of a composite drawing. The drawing was realized through substrate printing, collaging and sketching. The image speculates on a future for the coastal archaeological dig and UNESCO world heritage site of L’Anse aux Meadows, Newfoundland and Labrador, Canada.

“In this future, the obsolete infrastructure of offshore oil extraction is moved near-to-shore and used to protect the site from sea-level rise and coastal erosion. The hybrid drawing suggests a future archaeology, through a layering technique that employs both digital and manual modes of architectural representation, creating a palimpsest within the drawing itself.” 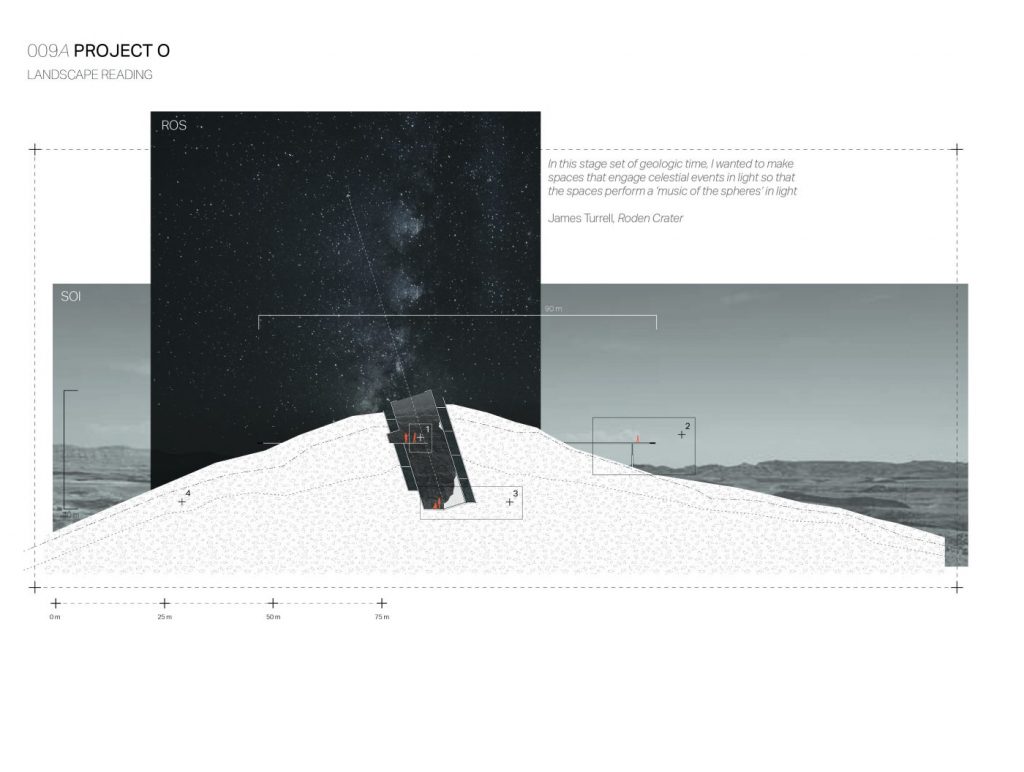 “Project Observatory offers a new opportunity to discover and experience the natural phenomenon of the Ramon Crater in the Negev or Naqab desert through a scientific lens. The project is a gateway to focus on geology and astronomy, observing them through light, time and space.

“It sits on a sandstone hill with thousands of prism-like rocks that index time and erosion in the crater through materials, views and the natural terrain. The structure’s materiality emphasizes the architectural atmosphere and notion of time. Over time the site will erode, ultimately allowing the design to document the passing of time.” 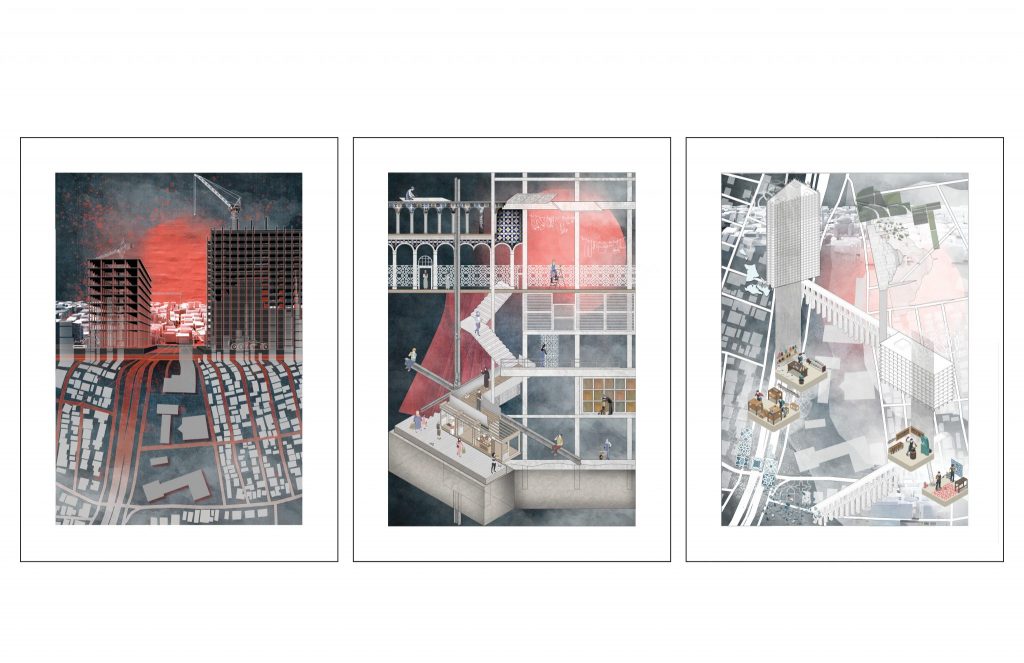 “Halted construction projects across Istanbul are symptomatic of deep economic troubles that have plagued the city for the past couple of years. One such area is Istanbul’s Fikirtepe district, where a promised new development, reduced to skeletons of half-finished tower blocks, stands in stark contrast to the city’s existing fabric.

“The intention behind these drawings is to speculate on what happens when layers of Istanbul’s unique identity start to appear again. The culture, religion, craft and architecture will bring life back into these cold, dead buildings and a neighbourhood, once forced to perish, will start flourishing again.” 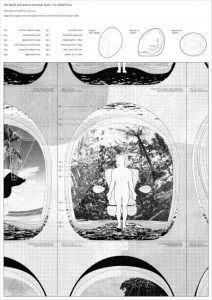 “New” York: A Story of People, Architecture and Climate Change by Matthew Nestico

“As temperatures rise, architecture can play a pivotal role in our future. Environmental instabilities, flooding and radiation from the sun all will ultimately impact and shape the public domain. The Health and Vacation Everybody Needs (H.A.V.E.N.) unit is part of a human-centric response to climate change in New York City.

“It is one element of a larger assemblage of interventions developed in the thesis “New” York: A Story of People, Architecture and Climate Change. This work proposes a world where legislation and directives centre between mediating the actions of people and their interactions among the everyday.” 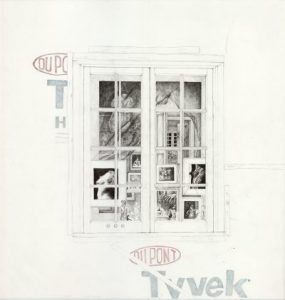 Spaces of Relation by Kristine Prochnau

“This project responds to a brief called A Canvas for the Imagination. The setting is a derelict, small house in downtown Ottawa. The proposal speculates about how it might be transformed when two famous inhabitants move in.

“These characters are Surrealist photographer and artist Man Ray and his muse, lover, student and later war photographer Lee Miller. Their relationship was tempestuous and its twists and turns are played out within the individual spaces of the house. Here, we see the front of the house and glimpse fragments of their life within.”

Studio: Drawing Codes – A Canvas for the Imagination
Instagram: @thegeminiiprince 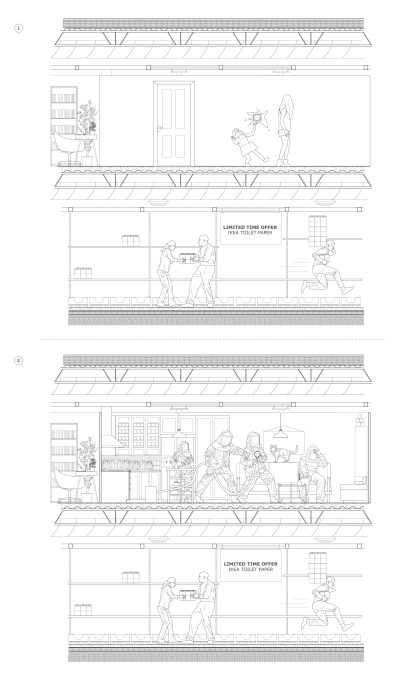 These Pretzels Are Making Me Thirsty: 920 grams of Architectural Humour by Ivana Rovic

“This image depicts a familiar setting: the Ikea showroom. However, in this world, Ikea is hosting an event where they have converted their showroom spaces into rentable units. One unlucky family has decided to quarantine themselves inside Ikea due to the Covid–19 pandemic and have gone to great lengths to protect themselves.

“Below, we see that Ikea has capitalized on the pandemic by selling particleboard toilet paper (‘may cause splinters’). This image is a part of the thesis These Pretzels are Making Me Thirsty: 920 grams of Architectural Humour, which explores the relationship between comedy and architecture.”

Al Rūḥ: A Harmony of Matter and Spirit by Rehab Salama

“Set far in the future, the drawings depict ruins of Istanbul’s mosques. They are distant and forgotten from the city’s fabric – standing in solitude and surrounded by their own silence, as a tessellation of voids and thresholds. In a divine unity with nature, the structure as a holy weaving of space and matter becomes sacred in its very emptiness.

“The architecture begins to unravel. The corporeal unfolds into an infinite multiplicity. The cosmos is mirrored as a constellation of elements swirling in perfect harmony. The drawing slowly becomes impossibly fractal, revealing the soul within the architectural flesh.” 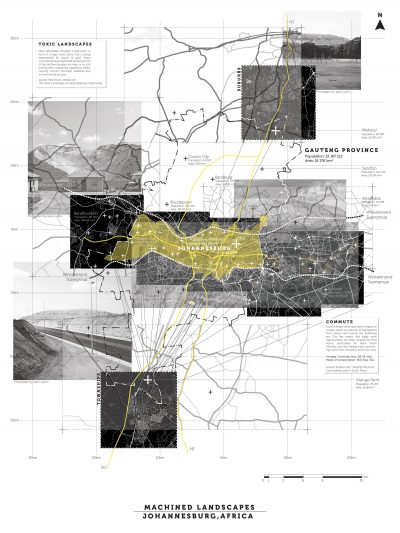 “This series of maps display the adjacencies between human life, natural geography and the industrial environment. The mapping process compares the population of regional areas, commute times and proximity to major transit routes.

“Large mine dumps flank major highways and residential neighbourhoods, posing serious health risks to the inhabitants. These machined mountains loom in the background of everyday life and ultimately become part of the identity of the landscape.”

“This thesis uses the medium of a science-fiction short film to address the potential of architecture to narrate the contemporary notion of Shinto techno-animism. The shotengai urban typology of a covered market becomes the architectural trope and catalyst from which the film explores techno-animism’s implications on space.

“The short film interprets techno-animism’s spatial consequences to range from vast infrastructures to minute household items, each interconnected through spiritual kami. The thesis stands as a personal expression and interpretation of contemporary techno-animistic beliefs. The atmosphere of the space portrayed evokes the meaning of a techno-animist world.”