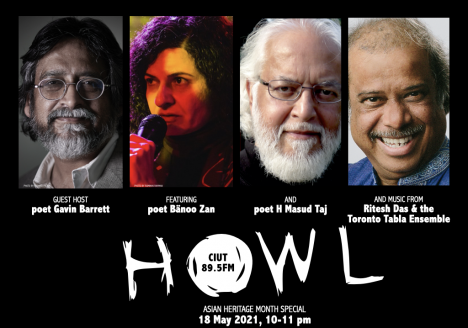 Adjunct Professor and poet H. Masud Taj is among the guests on the Howl show on CIUT 89.5 FM for an Asian Heritage Month Special featuring poetry.

His featured poems include Elephant, recited in conversation with architect Arthur Erickson at the National Gallery of Canada; the villanelle Killing & The Art of Calligraphy that probes the serial creator/killer; and Cockroach, which was a finalist at Scream in the Park, Toronto. They also include Fade-Out, a bilingual poem dedicated to people dying during the pandemic, and Paperclip, which was among the 100 poems on objects during lockdown last year.